Monette and Mady Malroux are twins. It’s what they’re known for, and how they earn their living. They’re an artistic duo, for hire as singers and dancers, and have modeled for Galliano and others less well known. They started out in cabarets years ago and called themselves the Diamond Sisters; danced in a George Michael video; had small parts in Paris, je t’aime and Amélie and on television. But mainly they’re artists of their own lives. The effect of seeing them on the streets of Paris isn’t so different from seeing them on stage or screen. When I suggest that they are “living sculptures”—it sounds better in French—they look pleased.

We sit down in their favorite café, near the Bastille; they order the same drink, some sort of apricot juice. They aren’t young—they seem to be in their sixties—and are quite formal in their manner. They’re wearing the same dress, the same shoes, the same necklace; they’re carrying the same purse (or so it seems); their hair is dyed the same red, the same red as their dress.

If I’d looked at them more closely, I’d have seen that they are wearing different watch straps and that the patterns on their very patterned purses don’t match. I gather that it’s something they often do when meeting people, so that they’ll have a secret to tell you.

They live together, always have, and have always worn the same clothes, or tried to. At first, their mother struggled against it, insisting they dress distinctly, and long after they left home she was still sighing at the sight of them dressed in identical outfits. Collective identity has its rewards—it helps deal with competition between them. Monette is the older of the two by five minutes, but Mady has never minded: As a child, she used to make it all right by saying: “I’m older too.”

Whether or not they’re being paid, their lives are a performance. They mean to be looked at, photographed, discussed. “Aren’t you a little old to be twins?” a woman said as she passed them in the street a little while ago. They like it when people speak to them, and relayed the remark with bright smiles.

They keep their clothes in the same closet and wouldn’t think of buying a new pair of shoes—they like them best when they’re pink—or coat or dress or jacket if there was only one left in the shop. Their look, they say, is natural, suited to their bodies. It doesn’t change when fashion changes. If they disagree in the morning about what to wear that day, they “negotiate.”

Like their getup, the twins are identical but not exactly the same. You can tell them apart. Their faces are a slightly different shape, and one is prettier than the other, or maybe just more flighty. Later, I wondered how they would have responded if I’d said M. is prettier than M.: Would it have been a slight, or a compliment to their collective identity?

And would they have answered with a je or a nous, which they normally use interchangeably? So when M. told me that Ravel is her favorite composer, that when she hears his music she gets goose pimples, I wondered why M. didn’t say what music she likes. Later it occurred to me that
I should have understood that Ravel’s music gives both sisters goose pimples.

In their own minds they’re not one person, but they aren’t two either. They see themselves by looking at each other. They’re mirrors. When they go shopping, one tries on the dress, and the other looks at the effect. L’une essaie la robe et l’autre regarde. In their apartment they have actual mirrors, too. You can’t see whether you’ve smudged your lipstick on someone else’s face.

In the identical notebooks they carry with them in their nearly identical purses—they offered to show me the purses’ identical contents, but I’d got the message by then—they’ve compiled a small dossier of curiosities, many of them notes about twins by “les scientifiques.” A person like me, they said, a non-twin, is a “singulier”—a singular—and there’s nothing wrong with that, but twins are a superior form of being.

M. went so far as to show me a piece of paper with a passage from Claude Lévi-Strauss copied out in pencil: Twins, like birds, it said, “occupy an intermediary position between the supreme spirit and the merely human.” It’s a thought.

*This article originally appeared in the August 19, 2013 issue of New York Magazine.

Meet Dorian Grinspan, the Editor of Out of Order 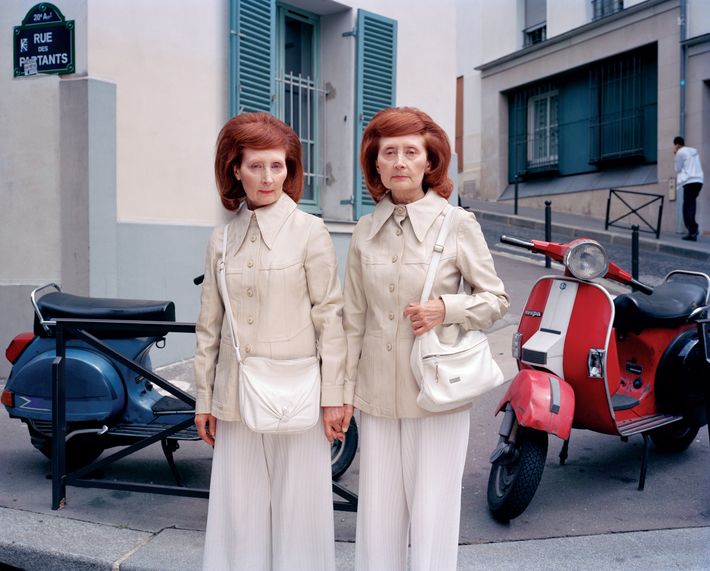