We’re back! And since it’s impossible to keep track of everything happening in one day of Fashion Week, the Cut will be compiling the most incredible moments from the shows, the scene, and all associated social media in our exhaustive (and, maybe exhausting?) Hit List. First things first: Suzy Menkes says the schedule is all wrong. Everyone who is not famous is chatting about how they have “allergies,” but we’re probably just sharing the same rhinovirus – are e-cigarettes better for that than regular cigarettes? Like a mobile humidifier, sorta? Good thing day one was a light one – Creatures of the Wind was the big win aesthetically, even if it didn’t quite draw the same audience as Costella Tagliapietra or BCBG. But who’s counting? Below, a summation of Thursday’s most memorable moments. Birkenstocks are back, green-eye makeup is already a thing, celebrities trekked (troke?) to Brooklyn and made it back alive. And us? We’re feeling like SNL’s Stefon. This, too, shall pass.

1. First out the gates: Wednesday night, Rachel Comey threw an intimate party, in Brooklyn, as if to test who would agree to travel all the way to Red Hook. Celebrities in attendance: Maggie Gyllenhaal, Rashida Jones, Zosia Mamet, Greta Gerwig, Parker Posey. We refuse to count how many of these women already live in Brooklyn. 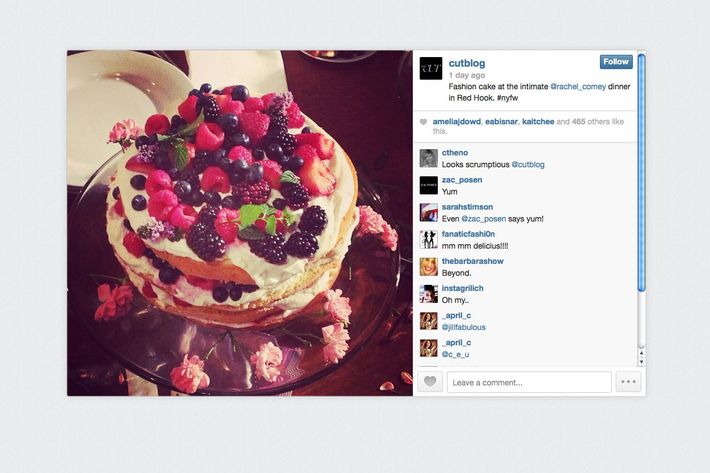 3. So, we hate to admit this, but Vogue was right. Everyone is, actually, wearing Birkenstocks this season. We have to assert that the new Tabitha Simmons x Creatures of the Winds flats would win in a footwear cage-match.

4. This model we spotted backstage getting her hair done at CotW is so into fashion she was watching the BCBG live-stream on her phone. Choice quote: “Oh, look! There’s my friend.” 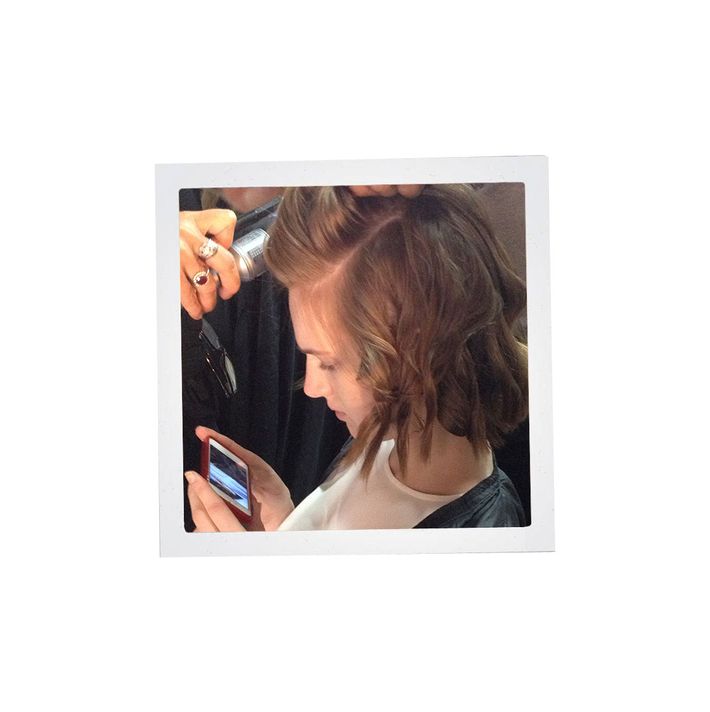 5. Street style – that grueling professional sport currently under consideration for the Shoji Olympics — has a new twist this season: It’s all about wearing heavily patterned, matching pants, tops, and even jackets. Makes getting dressed easy, even when traveling with friends. 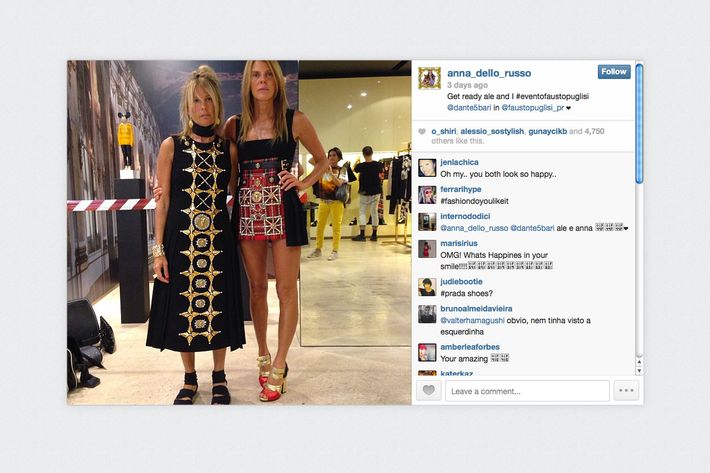 6. But June Ambrose’s daughter out-dressed them all, wearing this amazing pair of antennae to BCBG.

7. NJOY – everyone’s preferred e-cigarette for “vaping” (yes, that’s a word we need to change) – will be sponsoring NYFW; hopefully-compensated interns are giving everyone free e-cigarettes. Ah, the joys of an unregulated nicotine industry! We’d say this is terrible for June Ambrose’s child, but we could really use the free smokes. 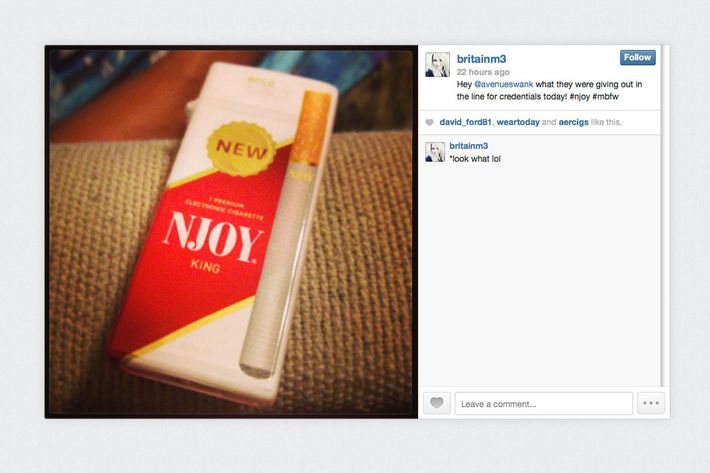 8. Green eyeshadow. For the alien in all of us. 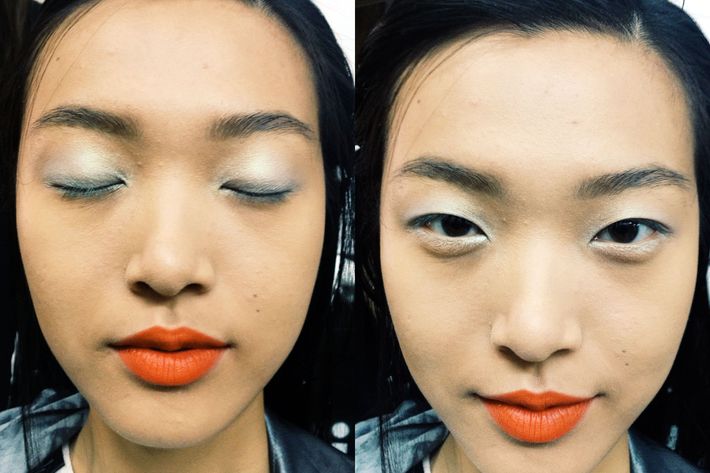 9. Breaking news: The latest in embellishment this season is totally going to be appliques. Move aside sequins, Swarovski crystals, and feathers. Exhibit A: CotW. Exhibit B: Honor. (No more Stefan voice.) (No promises.) 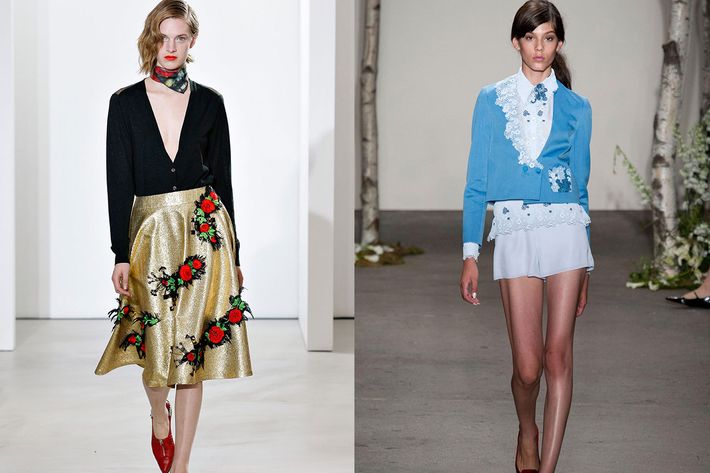 10. In other clothing news, there was also a crop-top invasion at Richard Chai. Four in total. Which means crop tops are sort of like nail art: that thing we declare “dies” and “lives” and is “major” or “not major” but is actually just its own new category of things women (and some men) wear. Like skinny jeans. 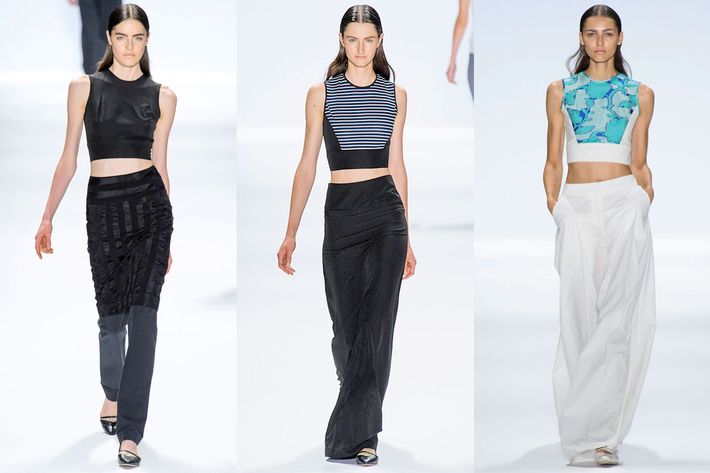 11. Seven years after Twitter launched, and three years after Instagram was founded, people in the front row have just one question to ask each other: Are you on Instagram or Twitter? This is an actual question we’ve heard. Like you have to choose, some new form of self-editing. The Cut is on both, obvi.

12. Are the Jonas Brothers the new Cara Delevingne? At this point, we’re only judging both solely by their eyebrow growth.

And you know what’s the best about wearing new fall shoes: Blisters. No Saint Laurent sweaters until it’s actually cold out, okay?

sports! 25 mins ago
This Advice from Elite Runners Will Inspire Even Non-Runners Running advice for your entire life.
style 25 mins ago
Hey Fashion Friend: I Need Summer Sandals That Won’t Give Me Blisters Hopefully these 18 pairs won’t destroy your feet.
By Emilia Petrarca
books 26 mins ago
The Sad Young Literary Man Is Now a Middle-Aged Dad Keith Gessen wrote a memoir about family life. His wife, Emily Gould, is mostly okay with that.
By Elizabeth Weil

what we know Yesterday at 6:40 p.m.
Gunman Kills at Least 19 Children and Two Teachers at Texas Elementary School The deadliest massacre of its kind since Sandy Hook.
gone sale-ing Yesterday at 5:28 p.m.
Here’s My Designer-Sunglasses Shopping Secret I never pay full price.
lawsuits Yesterday at 5:18 p.m.
Kate Moss Says Johnny Depp Never Pushed Her Down a Staircase Testifying in Heard v. Depp, the model denied the rumor.
uvalde Yesterday at 4:47 p.m.
The Children Are No Longer Our Future So now what?
By Brittney Cooper
i tried it Yesterday at 4:00 p.m.
Okay, Fine, Journaling Kind of Works After years of carrying around an empty notebook, I finally forced myself to write down my weirdest, dumbest thoughts.
action item Yesterday at 2:45 p.m.
How to Help the Uvalde Community From supporting Robb Elementary School families to pressing for gun-control legislation.
texas school shooting Yesterday at 2:10 p.m.
Beto O’Rourke Confronts Greg Abbott Over Shooting: ‘This Is on You!’ The Democratic candidate for governor interrupted a press conference about the elementary-school shooting before he was pulled away by security.
texas school shooting Yesterday at 1:18 p.m.
‘We Can’t Get Numb to This’ Basketball coach Steve Kerr expressed how many are feeling after the Texas elementary-school shooting: exhausted and angry.
your next move Yesterday at 1:00 p.m.
‘How Can I Convince My New Boss That I’m Ready to Be a Manager?’ The arrival of a new boss means having a clean slate at work, especially if they’re an external candidate. So position yourself as an asset to them.
survivors Yesterday at 1:00 p.m.
Stop Forcing Me to Endure the Horror of Depp v. Heard The defamation trial against Amber Heard by Johnny Depp has turned abuse into online entertainment. For survivors, it’s shattering.
do i need this? Yesterday at 12:28 p.m.
Do I Need the First-Ever Uniqlo x Marni Collaboration? How to get the drop tomorrow, May 26.
self Yesterday at 12:00 p.m.
It Took Me 18 Years to Eat Three Meals a Day The comedian and star of E!’s Welcome Home Nikki Glaser? on finally overcoming a lifetime of eating disorders.
what we know Yesterday at 11:29 a.m.
These Are the Names of the Uvalde School-Shooting Victims At least 19 kids and two teachers are dead after a gunman opened fire on a Texas elementary school.
galas Yesterday at 9:24 a.m.
The PEN America Literary Gala Had Something to Say About Book Burning Margaret Atwood tried to burn a copy of The Handmaid’s Tale.
love and tiktok Yesterday at 8:00 a.m.
The Free Dating Coach That’s Already on Your Phone TikTok. It’s TikTok.
sorry May 24, 2022
Walmart Is Reevaluating Their Juneteenth Ice Cream The retail giant also rolled out emancipation-themed wine bottles, commemorative T-shirts, and party supplies.
celebrity May 24, 2022
Billie Eilish Says Tourette’s Syndrome Is ‘Exhausting’ Eilish told David Letterman that reactions to her tics often leave her “incredibly offended.”
More Stories