The color beige brings to mind the scene from Sex and the City (bear with us) when Mr. Big complains to Carrie that his new wife loves beige. “Everything in my apartment is now beige. Beige is bullshit,” he moans. On the plus side, beige is the epitome of inoffensiveness; it’s neutral and goes with everything. But it’s also bland, the color of Band-Aids and boredom. And at the Emmy Awards last night, it was the trendiest dress color by miles.

Sure, all the beige wearers tried to make their dresses unique, and you can picture stylists saying, “See, this ruffle and/or neckline and/or bead detailing makes it really special!” But in the end, a parade of pale, pearly-colored dresses (also referred to as “nude” or “flesh”) is like vanilla ice cream with no toppings: perfectly nice, but nothing to write home about.

There were exceptions, though, even if they were predictable: Several actresses wore plunging scarlet gowns, including perennial bombshell Sofia Vergara. Others, including Tina Fey and Anna Chlumsky, stuck to the well-worn path of jewel-toned fishtail dresses, which are usually flattering if not entirely memorable. And there were notable outliers, including Lena Dunham in floral Prada and Kiernan Shipka in fresh, embellished Delpozo.

We’re still a ways away from awards season, so consider this an amuse-bouche for hopefully more exciting red-carpet looks to come. Click through our slideshow to see the top ten trends from last night. 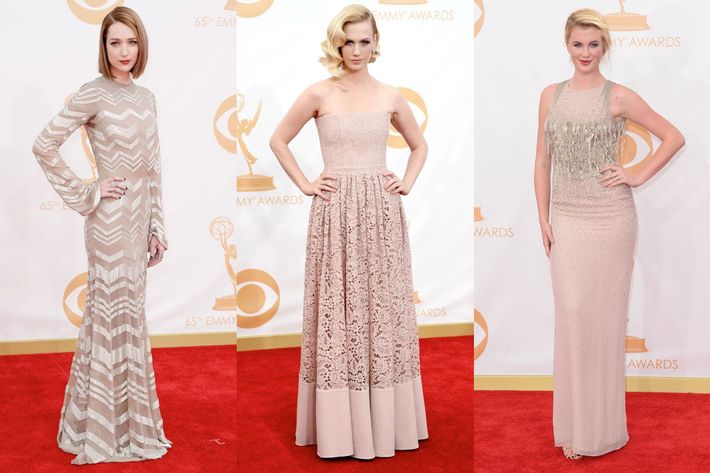 Kristen Connolly, January Jones, and Ireland Baldwin all went the beige route last night, with the least success out of everyone. Their dresses were modestly cut and, despite some vague attempts to be interesting (Connolly’s sheer zigzag skirt, Baldwin’s odd armpit fringe), they weren’t exciting enough to withstand such a wimpy color. 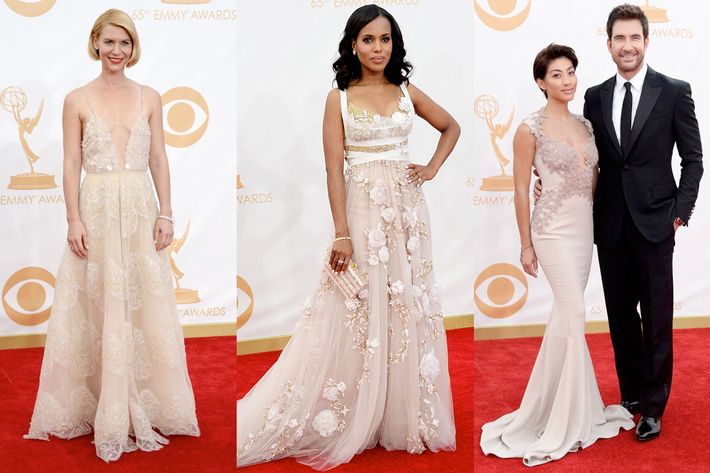 More beige came by way of Claire Danes, Kerry Washington, and Shasi Wells, and while these dresses still have their problems (Danes looks uncomfortable, and Washington looks like an over-decorated maypole), at least they’re quite striking. If you’re going to go beige, you’ve got to go bold, and an unexpected neckline is an effective way to do so. 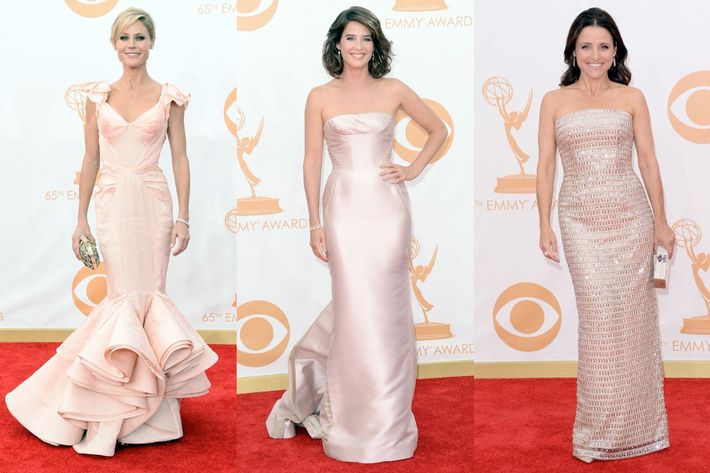 Julie Bowen, Cobie Smulders, and Julia Louis-Dreyfus also got the beige memo, but added shine and/or sparkle, which jazzed things up marginally. 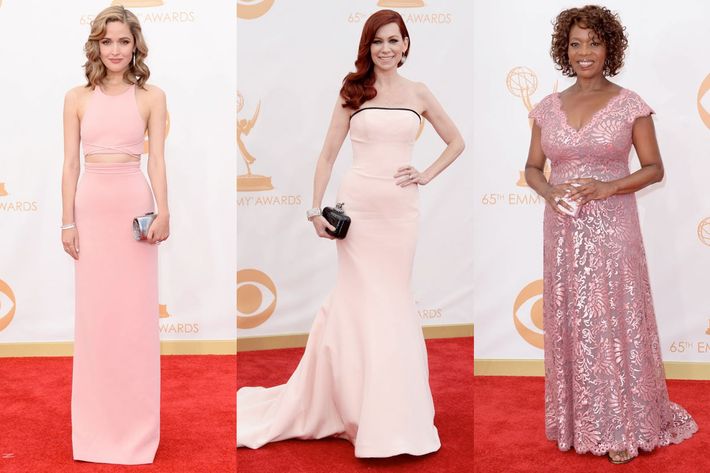 Rose Byrne, Carrie Preston, and Alfre Woodard’s dresses erred more on the “blush pink” side of the color spectrum, but not quite enough to separate them from the pack. Rose’s dress is close enough to her skin tone that you barely notice that slice of midriff, while Preston’s is too reminiscent of 1000 Island dressing (not a good thing, especially for a redhead). 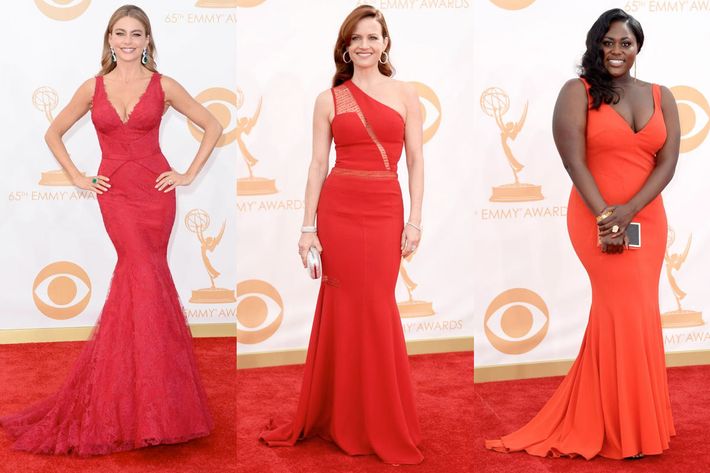 You can depend on Sofia Vergara for many things, and one of them is a sexy fishtail dress in traffic-stopping red. Both Carla Gugino and Danielle Brooks went for a similar look, because it’s hard to go wrong with classic Hollywood glamour. 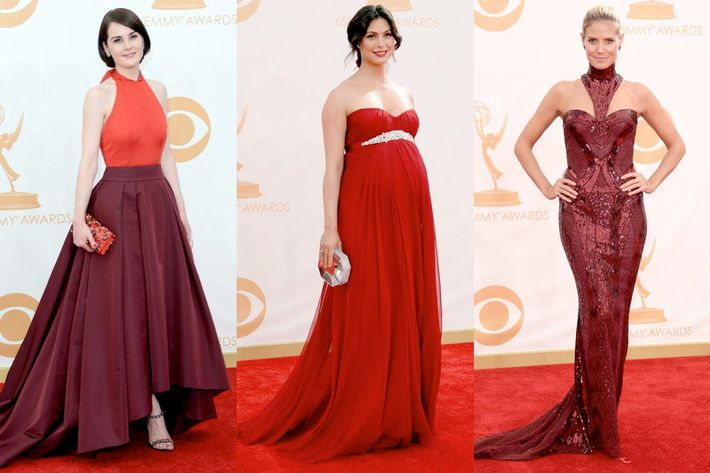 Michelle Dockery, Heidi Klum, and a pregnant Morena Baccarin tried slightly more unusual red dresses than the cleavage-baring, Vergara-esque type. Sure, the real highlight of Baccarin’s look is her tummy, beautifully framed by that crystal belt, but the dress works well. And Dockery’s two-toned Prada is both simple and striking. Klum looks costumey, as usual, but at least she really brought it. 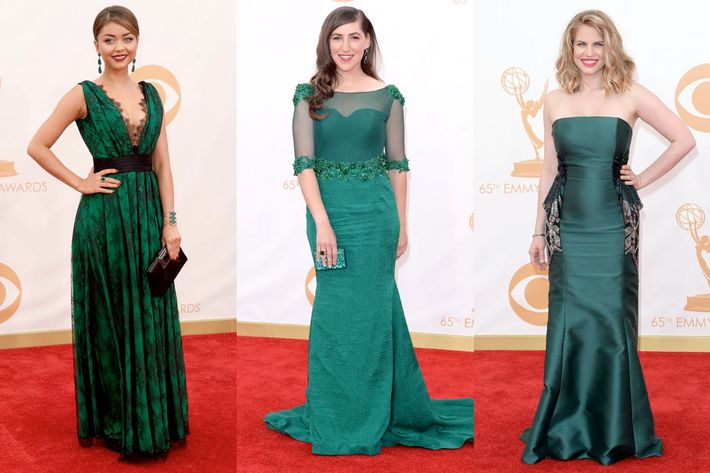 Everyone looks good in a rich green. Sure, these dresses weren’t knock-your-socks-off fabulous — in fact, they’re all quite prom-y — but the color is eye-catching (see also: the most popular color of 2013) and photographs nicely. 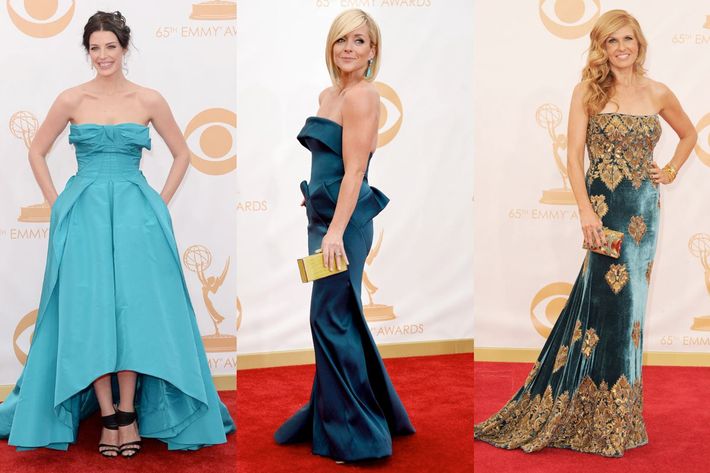 A first cousin of emerald, teal is another easy crowd pleaser; these actresses went a more decorative route, with ruffles and gold trim. Jane Krakowski’s fun peplum was the arguably better use of excess fabric than Jessica Pare’s pleated mullet skirt, and Connie Britton gets points for the gold embellishment, even though the velvet is a bit much. 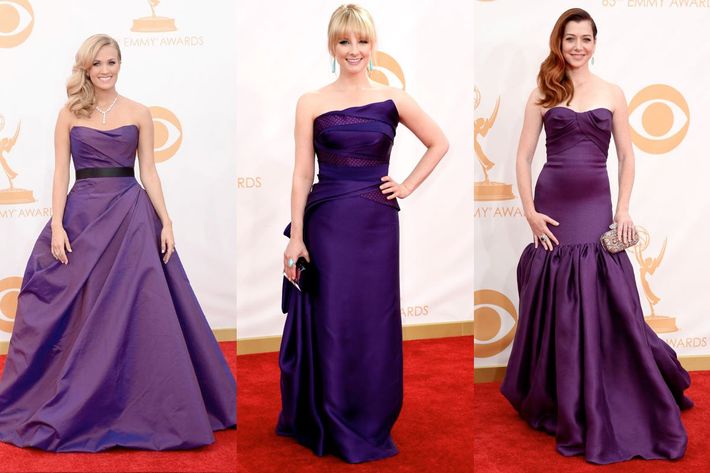 Carrie Underwood, Melissa Rauch, and Alyson Hannigan all went for regal purple, another easily digestible jewel tone. Basically everything on the blue end of the color spectrum is easy to pull off. Moving on. 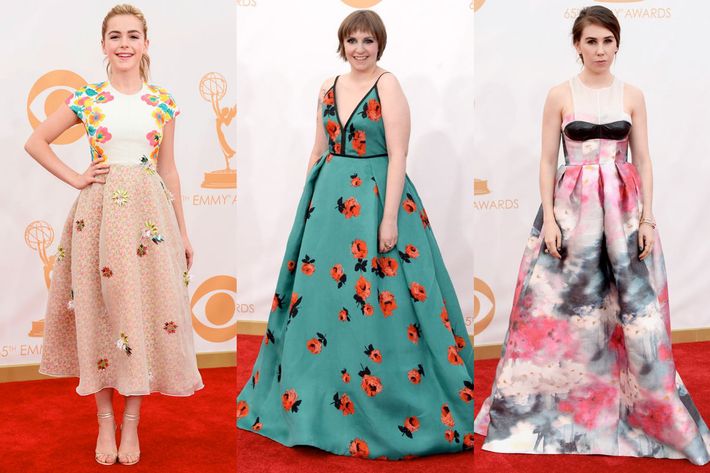 Very few actresses strayed away from solid colors, but those who did went for bright florals. Kiernan Shipka’s dress was almost part of the beige bandwagon, except for a few well-placed flowers, printed on her bodice and then affixed to her tulle skirt in appliqué form. Meanwhile, Girls actress Lena Dunham went for ballsy Prada, and her co-star Zosia Mamet wore a painterly rose print. The latter two may not have been the most flattering dresses of the evening, but at least they were different, and in a sea of monochrome almond, that counts for a lot.

what we know 7:17 p.m.
Memphis Police Release Horrific Video of Tyre Nichols’s Beating: Updates The footage shows police officers repeatedly striking Nichols, then not rendering aid afterward.
spring fashion 6:08 p.m.
12 Ways of Looking at André Leon Talley The friendships and love stories found inside his estate auction, as told by his nearest and dearest like Anna Wintour, Marc Jacobs, and Tom Ford.
By Cathy Horyn
wait what is happening on tiktok? 6:05 p.m.
Everything We Know About TikTok’s Lashgate Drama Did Mikayla Nogueira add false lashes or not?
parties! 5:56 p.m.
Teyana Taylor, Anna Camp, and More of the Bestest Party Pics This Week Parties with Gucci, Sundance, and more.
gone sale-ing 4:37 p.m.
10 Things You Don’t Have to Pay Full Price for This Week Deals from Dyson, Nordstrom, Shopbop, and more.
friday sales 3:01 p.m.
19 Things on Sale You’ll Actually Want to Buy: From Lunya to Areaware Including fuzzy Birkenstock clogs, a teensy Cricut heat press, and our favorite weekender bag from Patagonia.
recommendations 3:00 p.m.
20 Best Butt Plugs You Can Buy Online According to experts.
q&a 12:53 p.m.
Saint Omer’s Guslagie Malanda Is No Longer an Actress in Secret How the Saint Omer actress went from art curator to awards-season hopeful.
the wedding files 12:26 p.m.
A Twice-Rescheduled Midweek Wedding in the Hudson Valley “We’re not really ‘farm wedding’ people, so that limited our options.”
By Kaitlin Menza
celebrity couples 12:15 p.m.
This Good Morning America Romance Keeps Getting Messier Amy Robach and T.J. Holmes are reportedly out at ABC.
keeping up with the royals 11:57 a.m.
Has Prince Andrew’s Teddy-Bear Collection Been Confiscated? His Buckingham Palace apartment has reportedly been revoked, and with it, his dozens of stuffed toys.
bellissimo 11:47 a.m.
Where Have I Seen Michael Imperioli’s Home Before? It’s unclear where The White Lotus ends and Imperioli’s apartment décor begins.
couture spring 2023 11:42 a.m.
At Valentino, Couture for Today Designers often look to the past for couture inspiration, but Pierpaolo Piccioli of Valentino believes it is only relevant if it talks to the moment.
By Cathy Horyn
valentine's day 11:05 a.m.
13 Flower Alternatives to Shop for Valentine’s Day Options that will last longer than a week.
culture 11:03 a.m.
Pamela Anderson Found Pam & Tommy ‘Crushing’ The actress called the Hulu series “salt on the wound.”
extremely online 10:44 a.m.
I Can’t Shut Up About the M&M’s Drama Revisiting Tucker Carlson’s one-man campaign against the “spokescandies.”
valentine's day 10:25 a.m.
16 Beauty Products My Boyfriend Won’t Stop Stealing From Me They double as great Valentine’s Day gifts, too.
¡hola papi! 6:00 a.m.
‘I’m Ashamed of Being Unemployed’ The path is long, crooked, embarrassing, and deeply silly. Having friends and passions will make it tolerable.
By J.P. Brammer
celebrity Yesterday at 9:13 p.m.
Britney Spears Just Wants Some Privacy The star confirmed police were called to her home by fans.
celebrity Yesterday at 7:08 p.m.
Ziwe and Lisa Rinna Brought RHOBH to Paris Fashion Week They were “ready to own it” in Mugler.
More Stories