Last week, Goldman Sachs Elevator — a parody Twitter account that purports to relay bankers’ overheard musings — and Business Insider published “The Unofficial Goldman Sachs Guide to Being a Man.” I don’t pretend to know how men should be, but generally I’d advise them not to be like this, unless being a Goldman Sachs man means never having a second date.

“When in doubt, always kiss the girl.”

“Buy expensive sunglasses. Superficial? Yes, but so are the women judging you.”

“You can get away with a lot more if you’re the one buying the drinks.”

“Find a Times New Roman in the streets and a Wingdings in the sheets. She exists.”

“Desserts are for women. Order one and pretend you don’t mind that she’s eating yours.”

“Hookers aren’t cool, and remember, the free ones are a lot more expensive.”

“Pretty women who are unaccompanied want you to talk to them.”

The list might have been funny, in an American Psycho kind of way, if it weren’t so obviously pleased with itself. (That last one made our own list of things we’ll miss now that patriarchy is dead.) And besides, you know how a ton of dudes will quote Patrick Bateman straight-faced, never having heard of Bret Easton Ellis? Writer Tory Hoen pointed out as much on the Ampersand today.

“At first I laughed it off, but when I witnessed guys unironically sharing it on social media accompanied by comments like, ‘Actually good advice here,’ I cringed,” she wrote. “For some, the heretofore ridiculous @GSElevator had suddenly become a trusted source for genuine life advice.”

That must have hit a little close to home, because Goldman Sachs Elevator himself—or at least, someone purporting to be him—popped up in the comments section, to ask Hoen why she can’t take a joke.

Very well written, but unfortunately you got it all wrong. You are clearly taking things far too literally … I think the fact that I advocate that the best way to get a nice umbrella is to steal one from church makes it obvious that there is an element of humor and satire in this. Irrespective of religious conviction, a real man wouldn’t do that!

I don’t have time to address each point (although I easily could), but i can highlight a few …

He addressed more than few. Below, a sampling of @GSElevator’s explanation of his jokes, followed by the full comment.

On approaching women: “Re women … when I say women want you to talk to them … I’m simply advocating that a man have confidence. This is not a commentary about women or what they want … It’s about a man having confidence. If a woman doesn’t want to be chatted to, she will make it abundantly clear, and a real man will respect that and go back to sitting alone (which I am a huge fan of). Too many men have regrets when it comes to women … Be confident.

On hookers vs. free ones: “Re hookers and free ones … Again, this is not a commentary about women as much as it [is] about the typical man’s mentality about dating, which is too often superficial. I don’t expect you to comprehend the nuance here, and it would take me too long to explain.”

On what you can get away with when you buy the drinks: “And if you’re buying the drinks … it just means you set the pace. Your jokes are funnier. You have the floor even when your stories are lame. You decide when the party is over. You are in control of the situation. You completely missed that one.”

“For such a great writer,” Goldman Sachs Elevator concluded, “I don’t understand how you could be so far off in terms of comprehension …”

For such an avowed satirist, I don’t understand why @GSElevator would be so defensive.

UPDATE: @GSElevator emailed The Cut to clarify that although the list has elements of humor and satire, and was taken too literally, the advice is sound and not entirely satirical. “I stand by and can support pretty much everything in there as genuinely decent advice,” the pseudonymous tweeter wrote, “especially with respect to moronic accusations of classism or sexism. It’s not that those comments hit close to home… rather, that they seemed so misguided that I felt compelled to help educate and clarify.…” 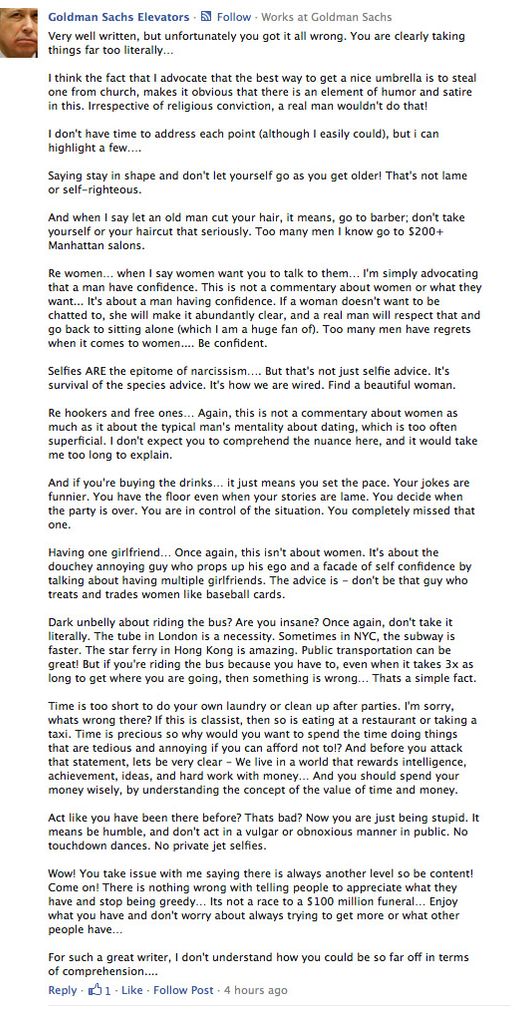