Five months ago, Rihanna captivated the world with a picture of her shiny butt in a denim thong. Today, she provides further context: Photos of the jeans-thong in action in teasers for her music video “Pour It Up.”

What follows is a detailed analysis of Rihanna’s denim thong from all angles.

The world premiere of the front view of Rihanna’s jeans-thong reveals intact zip-and-button closure and modified pockets reminiscent of a gun belt or micro-mini chaps. As previously speculated, primary contact with the vulva falls not to the jong, but to the red stretch-lace thong layered beneath it. 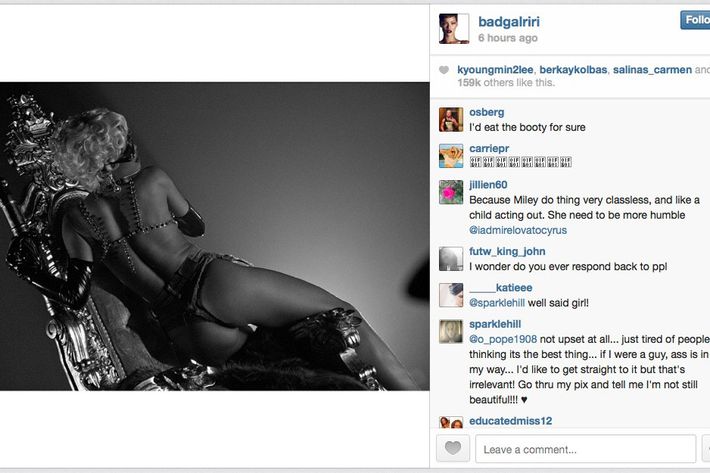 Both the jong and the lace thong layered below go all the way up Rihanna’s ass. To quote jong discourse, “layering of thongs is like, just get a butt plug.” 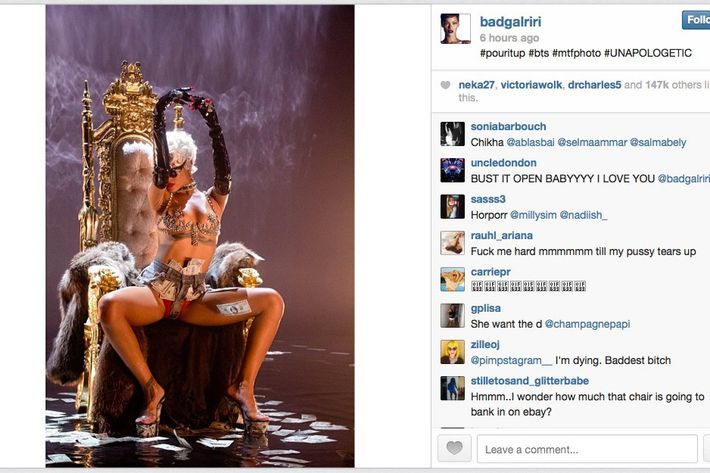 Though Rihanna’s butt cheeks are exposed, she sits upon a fur coat tossed over a velvet tufted throne. (Layering of butt tufts?) The jong’s high waistband is optimized for holding dollar bills. Though the songstress has “money on my mind / money, money on my mind” in her song, in the music video she has money, money on her crotch, thighs, and tummy. 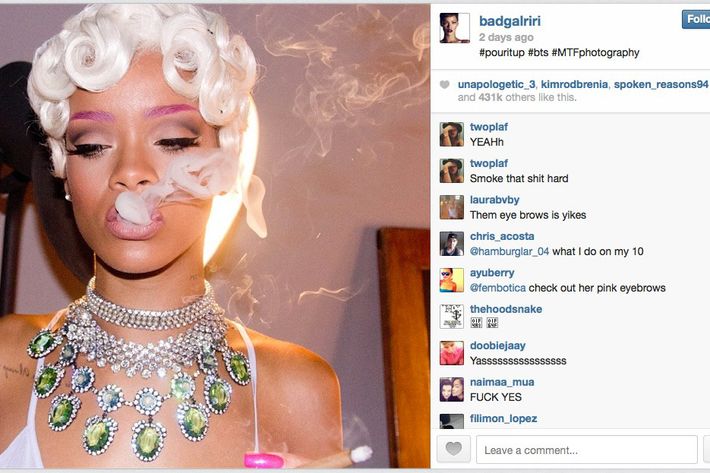 As for the rest of the video, there’s a silky lingerie ensemble that involves white hair and pink eyebrows. 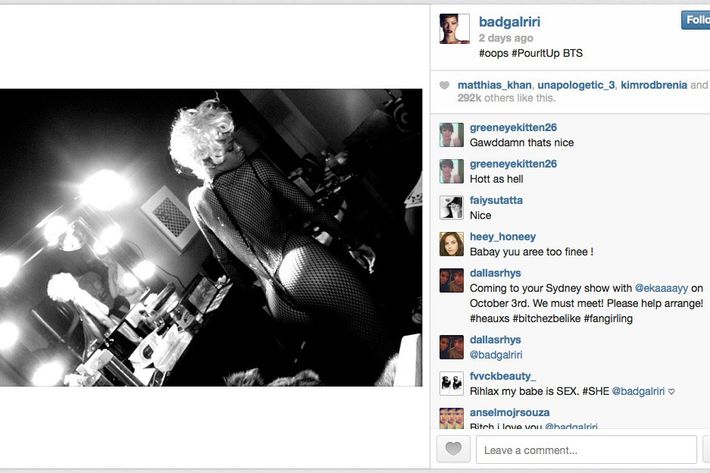 And a fishnet body stocking with some sort of body-harness-necklace thong?

Rihanna also posted a video of an extremely acrobatic pole dancer auditioning — then performing on set — on her YouTube account last night.

If you’re the sort of person who enjoys outraged debates over pop star provocations involving female sexuality, money, and power, this should be a great week for you! In addition to the 21 “Pour It Up” pictures Rihanna posted on Instagram, Miley Cyrus’s MTV documentary and new album debut this week, too. Rihanna may be pointedly stoic when it comes to Miley (and the hit song that got away) but between the modified denim, layered thongs, and stripper dance moves, it’s getting harder to talk about one without the other.

#metoo 4:10 p.m.
What We Know About the Disappearance of Peng Shuai After accusing a top Chinese government official of sexual assault, the tennis star’s whereabouts have become a cause of international concern.
school shootings 3:45 p.m.
A 15-Year-Old Reportedly Opened Fire at a Michigan High School A suspect has been charged as an adult in the shooting and death of four students.
parties! 3:22 p.m.
The Bestest Party Looks of the Week Hi, Machine Gun Kelly!
westward ho 3:08 p.m.
Playing The Oregon Trail Made Me a Murderino All those settlers dying violent deaths on their way west? So good.
friday sales 2:27 p.m.
18 Things on Sale You’ll Actually Want to Buy: From Everlane to Sephora Including our favorite brightening eye cream and an Eberjey-esque cotton pajama set.
new faces 2:10 p.m.
Blackpink’s Lisa Is Expanding Her Résumé The K-pop megastar has a new big beauty job.
By Asia Milia Ware
abortion 2:03 p.m.
Fact-checking the Arguments That Could Overturn Roe v. Wade An incomplete list of the abortion-related fallacies the Supreme Court heard this week.
"the fedex debacle" 1:11 p.m.
Delivery Driver Hurls Hundreds of Packages Into the Abyss Maybe you can kind of see their point?
hair news 12:36 p.m.
Billie Eilish Is No Longer Blonde Surprise!
sex and the city 12:23 p.m.
Why Isn’t Samantha in And Just Like That …? All the reasons Kim Cattrall did not want to be in the Sex and the City reboot.
celebrity 11:10 a.m.
Tristan Thompson Is Reportedly Expecting Another Child His trainer, Maralee Nichols, claims she is pregnant with Thompson’s third child.
roe v. wade 10:05 a.m.
Amy Coney Barrett’s Adoption Myths “What’s happening at the Supreme Court is that people are using us to further their own agenda. They’re co-opting our lives and our stories.”
rust 9:30 a.m.
Everything We Know About the Rust Movie Shooting In a new interview, Alec Baldwin says he didn’t pull the trigger of the gun that killed Halyna Hutchins.
are u coming? 8:00 a.m.
Where the Wild Things (and the Straights) Are One night at House of X, the very Manhattan alter ego to Bushwick’s House of Yes.
By Brock Colyar
advent calendar 2021 8:00 a.m.
Gift of the Day: A Dusen Dusen Trash Can This trash can can brighten up any dark corner of your apartment.
¡hola papi! 6:00 a.m.
‘I’m So Lonely. What’s Wrong With Me?’ I like the idea of accepting loneliness as fundamental to the human condition. It takes the sense of personal failure out of the equation.
By J.P. Brammer
#freebritney Yesterday at 9:49 p.m.
Britney Spears Is Doing Skits Now Introducing Britney Spears the therapist.
tabloid culture Yesterday at 8:47 p.m.
Meghan Markle’s Latest Court Victory Is Just The Beginning The Duchess of Sussex vs. the Daily Mail has come to an end — for now.
sobriety Yesterday at 6:48 p.m.
Demi Lovato Says Good-bye to ‘California Sober’ “Sober sober is the only way to be,” Lovato announced in an Instagram Story.
maxwell trial Yesterday at 5:49 p.m.
Witness Says Ghislaine Maxwell Groomed Her at Age 14 And more key testimony from the trial of Jeffrey Epstein’s alleged partner in sex crimes.
More Stories