Another year, another Victoria’s Secret Fashion Show! Or, as the announcer put it, “the greatest fashion event in the world.” There were no awkward cultural misappropriations this year, but still plenty to gawk at. Below, a list of our revelations from the evening.

1. The very cute male “stagehands,” dressed in black jeans and tight t-shirts emblazoned with the word “backstage,” were actually maiters. We even recognized one from the Cut’s maiter tribute this summer. Sadly, tonight they held velvet ropes instead of cocktails.

Embarrassed to admit I recognize some of the dudes guarding the stage at the @VictoriasSecret show from this story: http://t.co/2OQNaNN73t

2. The runway was covered in glitter. Because, of course! Flecks of it even got kicked into the air when the models stomped extra fiercely, creating a nice halo of sparkles around their feet.

4. And despite rumors to the contrary, Cara Delevingne did walk in the show, first with a soccer ball that she almost dropped…

… and then with a pair of inexplicable yellow gloves, like what you wear to wash dishes.

5. It was tough to discern Taylor Swift, the evening’s big-name performer, from the models —  she too has long hair, long legs, and an impressive strut. During the “Brittania”-themed portion of the evening, she wore a British flag dress and a tiny top hat:

She later changed into a sequined micro-mini, because when in Rome!

6. Joan Smalls is simply not capable of looking tacky. She is elegant even dressed as a green, leather-trussed bird.

8. One of the acts was “shipwreck”-themed, which meant the models walked with tattered wings, as though they were damaged sailboats — or castaways in shredded clothes but miraculously perfect underwear.

8. Girl group Neon Jungle is officially the next Spice Girls (or maybe En Vogue?), only with even more outlandish spandex. Audience members dutifully twirl their rave-y light-up toys while they performed, which looked cooler than expected.

9. Doutzen Kroes as an Eskimo, with inexplicable fur cuffs. A nod to Altuzarra’s giant mittens? Eh, probably not.

10. As always, the Angels’ butts were covered with just enough fabric to stay out of thong territory. By some feat of science, they were perpetually tiptoeing around wedgie-land but always managed to keep their cheeks contained. It’s a fine line. 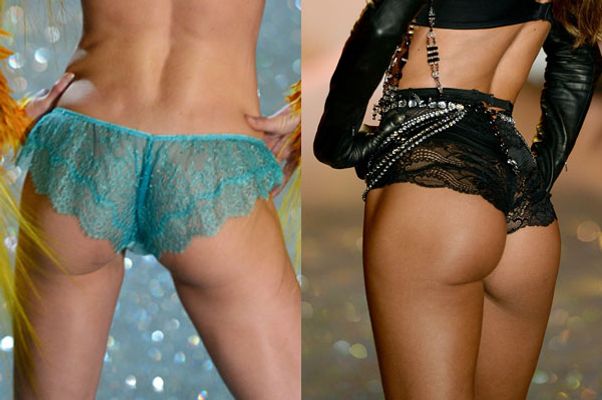 11. Oh, and Fall Out Boy took the stage, in man-capris and checkered Vans! As we overheard one person say, “They’re probably just as surprised they’re performing as we are.” Ah, Victoria’s Secret. You’ve always got something up your furry non-sleeve.

gone sale-ing 6:24 p.m.
What You Need From Net-a-Porter’s Cyber Monday Sale According to the Cut Shop editors.
fashion 4:51 p.m.
What to Know About the Balenciaga Ad Scandal The fashion house is under fire for two separate campaigns that consumers say promote child exploitation.
black friday 3:00 p.m.
24 Best Cyber Monday Fashion Deals From Everlane, Nordstrom, Saks, and more.
celebrity 1:00 p.m.
Is Minka Kelly Dating the Imagine Dragons Guy? She and Dan Reynolds went out for dinner for … five hours?
chaos 12:16 p.m.
Elon Musk’s Bedside Table Is Even More Terrifying Than You’d Expect Which is more concerning: the multiple guns or the cans of caffeine-free Coke?
brooding 12:00 p.m.
Are There Any Kids’ Books Out There That Are … Actually Good? Wizards and dragons need not apply.
By Kathryn Jezer-Morton
gone sale-ing 10:13 a.m.
33 Amazon Gift Ideas That Are Also On Sale For Cyber Monday Kill two bird with one stone.
celebrity 9:40 a.m.
Pete Davidson and Emily Ratajkowski Hit a New Relationship Milestone They appeared very happy to be together at Sunday night’s Knicks game.
gone sale-ing 9:04 a.m.
21 Cyber Monday Lifestyle Deals to Make Your Humble Abode a Little Less Humble It’s all in the details.
gone sale-ing 8:06 a.m.
The 29 Best Cyber Monday Beauty Deals Tatcha, Sephora, and Nordstrom are already offering some great discounts.
how i get it done 7:01 a.m.
Aurora James Is Too Busy For This Interview The Brother Vellies designer talks 80-hour workweeks, supporting Black entrepreneurs, and wearing Issey Miyake to the gym.
astrology Yesterday at 8:30 p.m.
Madame Clairevoyant: Horoscopes for the Week of November 28 Jupiter retrograde is ending, so you can put the rose-colored glasses back on.
By Claire Comstock-Gay
sex diaries Yesterday at 8:00 p.m.
The Divorced Lawyer Who Loves Getting Ready for Dates This week’s sex diary.
snacks Nov. 25, 2022
I Can’t Shut Up About Spam Figgy Pudding It’s so wrong, and yet so right.
culture Nov. 25, 2022
Rebranding Midlife Celebrities like Naomi Watts, Stacy London, and Judy Greer are determined to make a business out of menopause.
5 questions with... Nov. 25, 2022
For Quentin Plair, Stripping Wasn’t Always on the Menu But the Welcome to Chippendales star’s confidence was renewed after playing an exotic dancer on TV.
5 questions with... Nov. 25, 2022
How Amanda Gorman Fostered Her Confidence It didn’t always come naturally, but the poet built it with affirmations from her mom and using her imagery as activism.
¡hola papi! Nov. 25, 2022
‘I Lost My Creative Spark’ Don’t think about the book you haven’t written or the drawing you haven’t sketched out. Think about what role you want art to play in your daily life.
By J.P. Brammer
star material Nov. 24, 2022
A Handy Guide to Astrology’s Black Moon Lilith Lots of mystery and intrigue with this one.
5 questions with... Nov. 24, 2022
Pauline Chalamet Shares Her Most Embarrassing College Story Live lobsters were involved.
More Stories