There’s nothing like a bunch of righteous teens to make you believe in the democratic power of Twitter again. Students at a Dallas-area public high school caught the attention of local news media yesterday after they live-tweeted walking out of an afternoon assembly with Bible-based dating guru and motivational speaker Justin Lookadoo. Using the age-appropriate hashtag #Lookadouche, students called attention to Lookadoo’s retrograde Dateable Rules, which say “dateable girls know how to shut up” and “dateable guys keep women covered up.”

The assembly had been made optional after parents visited Lookadoo’s website and complained earlier this week, the Dallas Observer reports. Many thanks to these students, who gave up a hard-earned afternoon of Taco Bell and GTA 5 to call out sexism and entertain us. 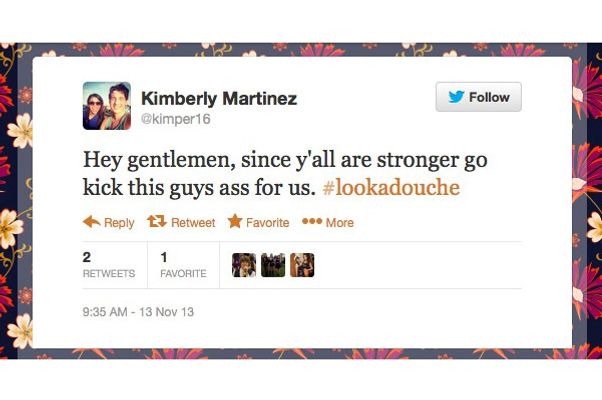 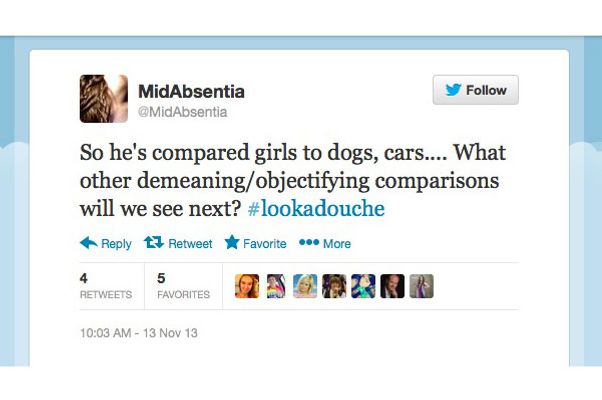 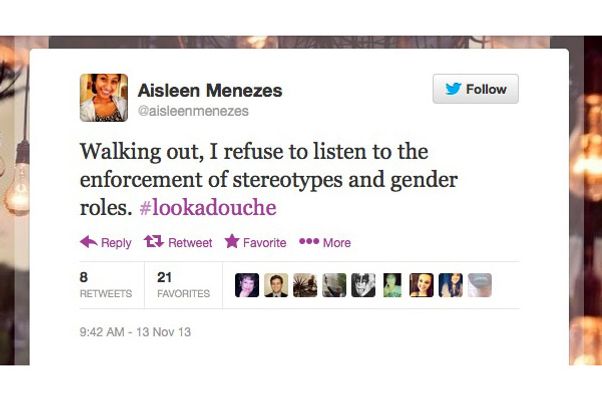 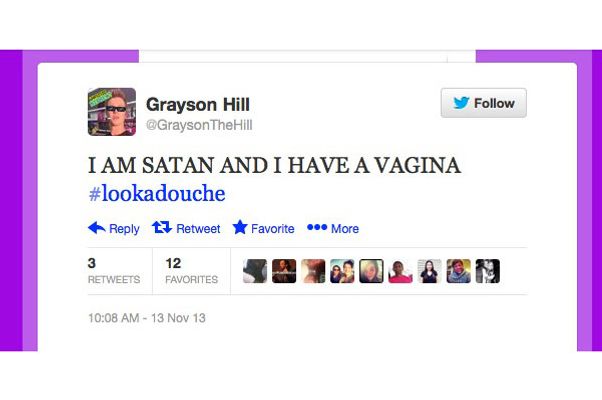 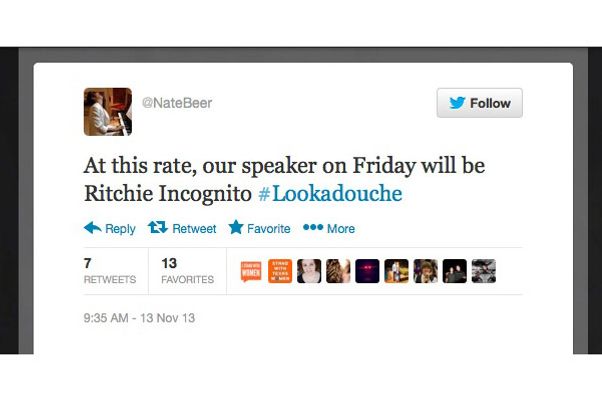 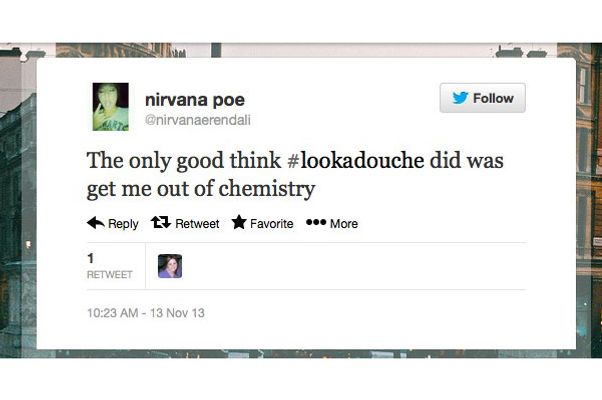 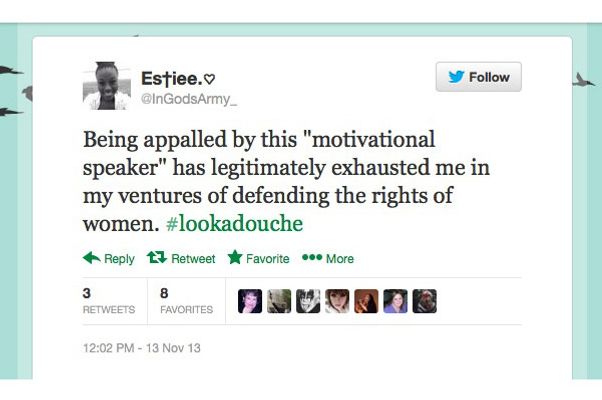 See All
second acts Yesterday at 5:30 p.m.
25 Famous Women on Getting Older Diane Keaton, Maya Angelou, Helen Mirren, and more women on aging.
By Julie Ma
screen time Yesterday at 5:07 p.m.
I Can’t Wait to Dress Like I Shop at Party City Deck me out in marabou feathers and fringe.
second acts Yesterday at 4:20 p.m.
Niecy Nash Makes Me Want to Define My Own Career Like the actress, I didn’t want to be told I could only do one thing.
By Doree Shafrir
pfw fall 2021 Yesterday at 4:19 p.m.
Who Says the Runway Is the Best Way to Look at Clothes? Some of the best shows this week weren’t really shows at all.
By Cathy Horyn
tastemakers Yesterday at 4:13 p.m.
The Denim CEO Making Cute and Sustainable Jeans Sarah Ahmed wants to offer an alternative to fast fashion.
a beautiful life Yesterday at 4:09 p.m.
Miranda Kerr Built Her Beauty Brand From the Ground Up Talking to the model turned CEO who started a skin-care company before it was cool.
By Erica Smith
keeping up with the royals Yesterday at 4:08 p.m.
The Attacks on Meghan Markle Could Not Be More Transparent U.K. tabloids are horrified by the prospect of the duchess expressing herself freely.
new faces of things Yesterday at 3:41 p.m.
Nina Dobrev’s Face Has a New Job The actress is being promoted to fragrance ambassador for Parfums Christian Dior.
tiktok vs influencer Yesterday at 2:40 p.m.
TikTok Joins Together in Roasting Controversial Influencer WeWoreWhat opened a TikTok account last week. TikTok was none too pleased.
power Yesterday at 2:34 p.m.
Cuomo Accuser Says He Is a ‘Textbook Abuser’ In a new interview, former aide Charlotte Bennett says the governor “let his temper and anger rule the office.”
television Yesterday at 1:25 p.m.
I Used to Live in Wanda’s Sitcom World The show understands how powerful pop culture can be when you’re an outsider.
fashion Yesterday at 1:11 p.m.
Another Ugly Fashion Lawsuit Rears Its Head Dolce & Gabbana has sued fashion watchdogs Diet Prada for defamation.
celebrity shopping Yesterday at 12:20 p.m.
Model Adwoa Aboah’s Favorite Journal Is This Drugstore Notebook “Its simple lined pages are all the prompt my mind needs to go in any direction I feel like going in.”
second acts Yesterday at 12:12 p.m.
How My Life Changed (and Didn’t) After Writing a Book You can have all the second acts you want, but you’ll always be yourself.
By Anonymous
culture Yesterday at 12:05 p.m.
Sexy Cartoon Bunny’s New Look Divides the Nation People have a lot of thoughts about Lola Bunny’s makeover in the new Space Jam.
culture Yesterday at 11:26 a.m.
Apes at the San Diego Zoo Got COVID Vaccines (Don’t freak out, it’s a special animal-only jab.)
friday sales Yesterday at 10:53 a.m.
22 Things on Sale You’ll Actually Want to Buy: From Everlane to Veja Including a Patagonia fleece, Adam Selman bike shorts, and a Le Creuset grilling pan.
hot bod Yesterday at 10:05 a.m.
Trying a New Exercise, Just Once, Is Crazy Good for Your Bod Moving in a way you never have before has outsized benefits.
keeping up with the royals Yesterday at 9:31 a.m.
Meghan & Harry’s Big Year What to know ahead of their tell-all interview with Oprah.
By Sangeeta Singh-Kurtz
style Yesterday at 7:00 a.m.
The Fashion Industry Can’t Seem to Get Enough of Carlos Nazario The stylist did 14 covers in 12 months.
By Emilia Petrarca
More Stories