It’s still hard for a woman to rep her favorite football team, but it’s never been easier for her to rep her genitalia. Over the past several years, streetwear labels and entrepreneurial screen-printers have taken the mantle of vagina pride of from the crunchy crafters of Etsy. They’re populating lower Manhattan and online shopping carts with T-shirts that are graphic in both senses, advertising female sexuality with a clarity that borders on aggression. (In Slutever blogger Karley Sciortino’s case, her own vulva.) Crossing trendy riot grrrl revival with trendy luxury brand spoofing, Team Vagina gear is not exactly a political statement, nor is it just a female equivalent of sleazy menswear classics like “FBI: Female Body Inspector.” En masse, it might be the fashion-world equivalent of the moment two years ago when, thanks to a sudden influx of female producers and screenwriters, critics noticed that suddenly the word “vagina” was everywhere on television. Then again, it might just be run-of-the-mill hipster provocation. 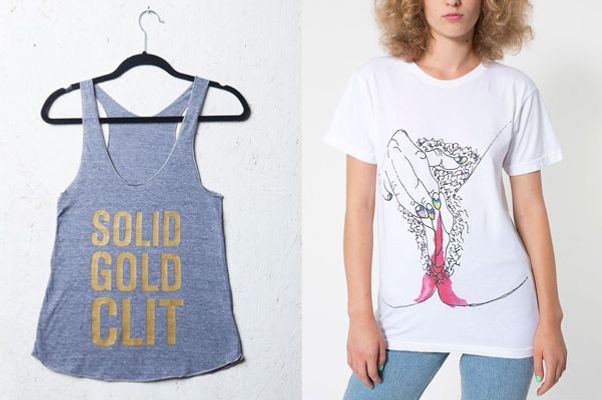 Some vagina pride shirts accompany feminist art projects, like American Apparel’s menstrual masturbation T-shirt. It was a collaboration with Petra Collins, the 20-year-old photographer and curator whose bush was banned by Instagram. “We’re so shocked and appalled at something that’s such a natural state,” Collins told Vice, “it’s funny that out of all the sexually violent or disgustingly derogatory images, this is something that’s so shocking apparently.” SOLID GOLD CLIT, reads a tank top created by New York artist Sophia Wallace, whose art-advocacy project “Cliteracy” also included a wall-size installation of clitoris factoids and a gold mechanical bull shaped like a clitoris. 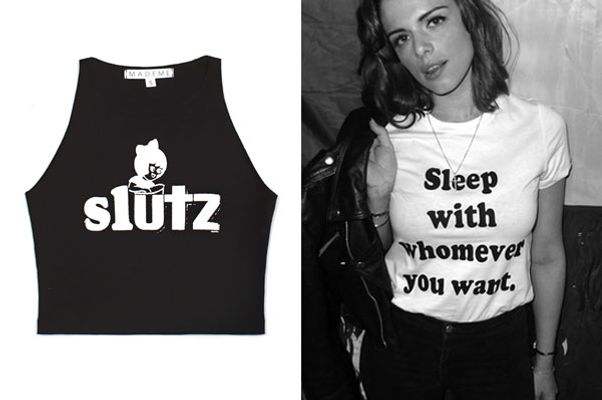 Haters immemorial pointed to a woman’s clothing as proof of her sluttiness. Only recently have designers (MadeMe, left, and Married to the Mob, right) made clothing for the woman who’s cool with that.

Then there are the boob shirts from (left to right), American Apparel, The Blonds, and Beautilation. They put the biting commentary on objectification — or is it just an homage to Vivienne Westwood? — exactly where his (and her!) eyes are headed.

Blame it on the Cartier parody hats, the sorority e-mail rant, or that regrettable Onion tweet — not even the C-word is taboo terminology for the graphic feminist set. Or at least its been reclaimed by House of LaDosha, the rap duo and creative collective whose plays on Tupac’s Thug Life and the musical Cats are favored by Rihanna and VFiles. 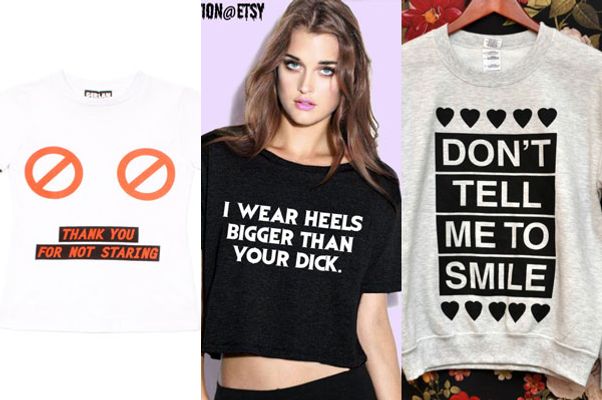 Christine Quinn and feminist activists hope that reporting street sexual harassment with smartphone app Hollaback will make sidewalks safer for women. Mightn’t it be faster to say it with a phallic analogy crop top (Beautilation), hearts on your sweatshirt (Hannah Is Awful), or forbidden signs on your boobs (Gerlan Jeans)?

finally 4 mins ago
Do I Feel Sad for Tom Brady Now? Having lost everything to football, the quarterback is finally retiring for real.
health and wellness 6 mins ago
Naomi Watts Wants You to Talk About Lube “What kind of Dry January have you had … Dry AF … am I right?”
marketing? 9 mins ago
Lingerie Ad Compares Bra to … Ryan Reynolds? Harper Wilde has pulled a truly bizarre endorsement (?) of their product.
spring fashion 13 mins ago
Everyone’s Dissolving Their Pillowy Filler Faces The filler era has ended. Now, everyone’s scooping out their face.
By Sangeeta Singh-Kurtz
why is your skin so good 25 mins ago
How This YouTube Beauty Executive Gets Her Skin So Good Chanel Tyler isn’t dubbed “the glow expert” for no reason.
beyonce 9:51 a.m.
Hope You’ve Been Saving for Beyoncé Tickets The Renaissance tour dates are finally here.
love and war 9:01 a.m.
What ‘Feminist Tinder’ Promised Bumble set out to make dating better for women. Did it deliver?
By Sangeeta Singh-Kurtz
ask a beauty editor 8:00 a.m.
‘I Love That Lipgloss Is Back, But Are There Any That Actually Last? ’ These are the longest-lasting glosses, according to experts. Follow their application tips if you want better wear.
spring fashion 8:00 a.m.
The Cool Tang of Ice Spice Visiting with New York’s princess of rap.
By Danya Issawi
celebrity Yesterday at 6:15 p.m.
Ashton Kutcher Finally Addressed Danny Masterson’s Rape Trial He hopes his That ’70s Show co-star is “found innocent of the charges brought against him.”
rust Yesterday at 4:00 p.m.
Everything We Know About the Rust Shooting Alec Baldwin and prop armorer Hannah Gutierrez-Reed have been charged with involuntary manslaughter.
spring fashion Yesterday at 3:00 p.m.
Vitamins for Virgos, Candles for Capricorns Truly everybody wants in on astrology.
obsessive tester Yesterday at 2:50 p.m.
Your Guide to the Best Tinted Moisturizers Summer is a makeup mind-set.
By Ashley Weatherford and Chinea Rodriguez
skin deep Yesterday at 2:27 p.m.
Are At-Home Beauty Devices Even Worth It? Should you microcurrent, LED, and microneedle at home?
spring fashion Yesterday at 12:00 p.m.
The Oh-So-Popular Popcorn Dress How a stretchy, nubby bodycon dress with aughts-era Limited Too vibes became the post-pandemic go-to splurge.
By Allison P. Davis
what we know Yesterday at 10:43 a.m.
A Seventh Officer Has Been Suspended After Tyre Nichols’s Death: Updates The officer was relieved of duty the same day the five officers charged with murder were fired for the beating.
celebrity babies Yesterday at 10:24 a.m.
So What Did Adam Levine and Behati Prinsloo Name Their Baby? We’d all like to know.
health Yesterday at 10:00 a.m.
How Our Definition of Healthy Fails Black Women What I’ve learned in my years as a dietitian.
spring fashion Yesterday at 8:00 a.m.
The Laundress Was Supposed to Be the Nice Detergent Until people started breaking out into hideous rashes.
By Emilia Petrarca
power Jan. 30, 2023
Marilyn Manson Accused of Sexually Assaulting a 16-Year-Old Girl In a statement from his attorney, Manson denied allegations he sexually assaulted the minor in 1995.
More Stories