Every time you see a picture of Keira Knightley’s hair and think, I wish my hair looked like that, there’s a 99 percent chance that celebrity hairstylist Ben Skervin was the one responsible for the perfect, artfully mussed hairstyle. Skervin and Knightley met on a Harpers & Queen shoot ten years ago, and have been working together ever since. In addition to being lauded as one of the world’s best hairstylists, he also has worked on the heads of Madonna and all the Spice Girls. Naturally, we had to have the Vidal Sassoon Pro celebrity hairstylist into the Cut office to do our next series of beauty GIFs, which should really unofficially be titled, “How to Get Our Hair to Look Like Keira Knightley’s All the Time.” This week, he shows us how he did this updo on Keira Knightley at the Venice Film Festival. The look is a wavy, romantic, “falling stars” updo.

Step 1: Start by curling your hair using a one-inch curling iron. You will want a pretty big curl, so after wrapping the hair around the barrel, hold for fifteen seconds, and then release. 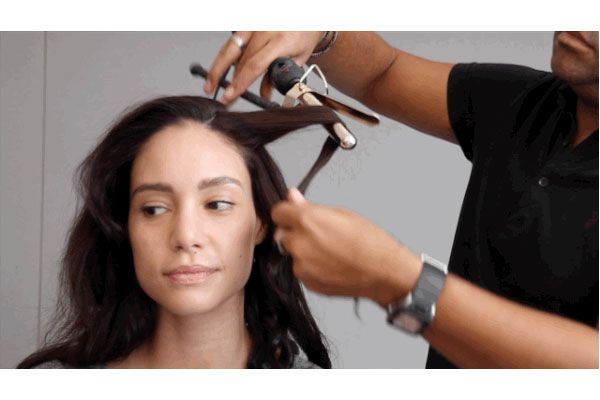 Step 2: After curling the entire head, use a brush to comb through the curls, loosening them into waves. Skervin uses a Mason Pearson brush here and keeps the hair at its natural part. 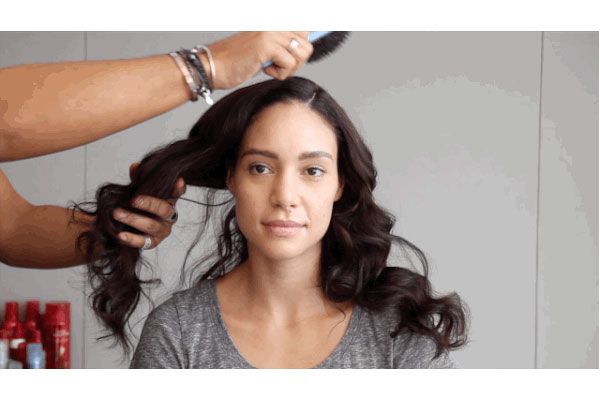 Step 3: Skervin back-combs the entire head at the root using a rat tail brush and pushing against the hair at the root twice to fluff it up. He says that fluffing it any more than that is excessive and too hard to wash out. 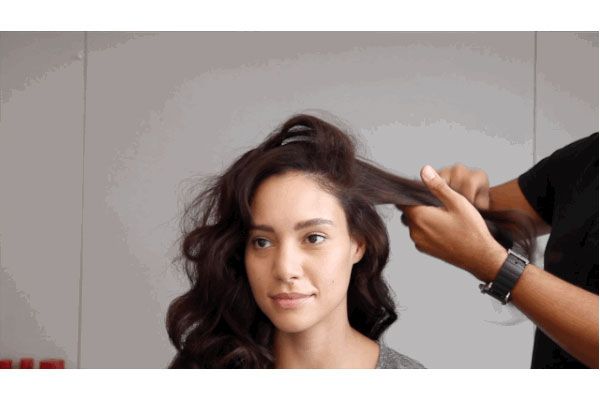 Step 4: Use an elastic to gather the hair into a loose ponytail at the bottom back of the head, leaving a section open in the front. He makes a ponytail that has a tiny amount of volume above it. Don’t overthink how much hair to leave in front because this will be pinned back later. 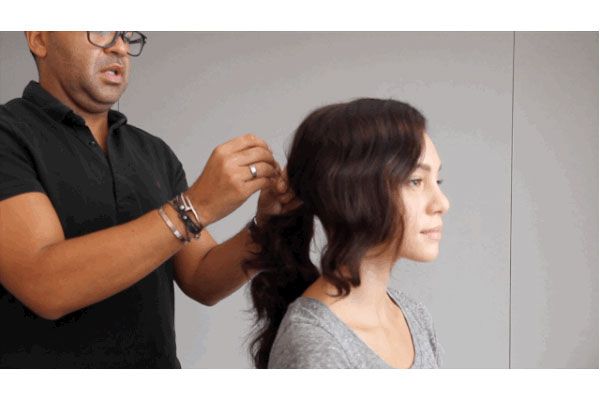 Step 5: Skervin twists the ponytail into a loose bun around the elastic and pins. 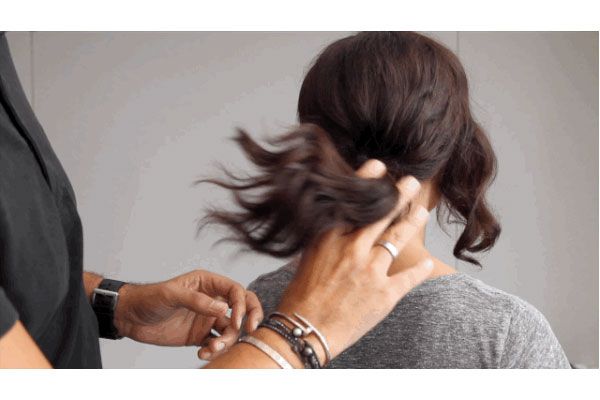 Step 6: He loosely gathers the loose hair in front and pins it just in front of the bun. If your hair is longer than the length of the bun, you can also pin it underneath. 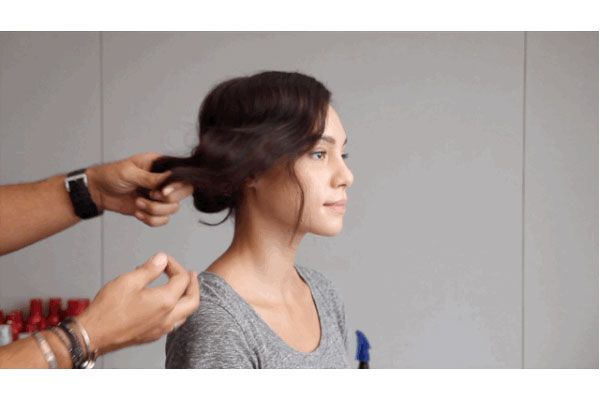 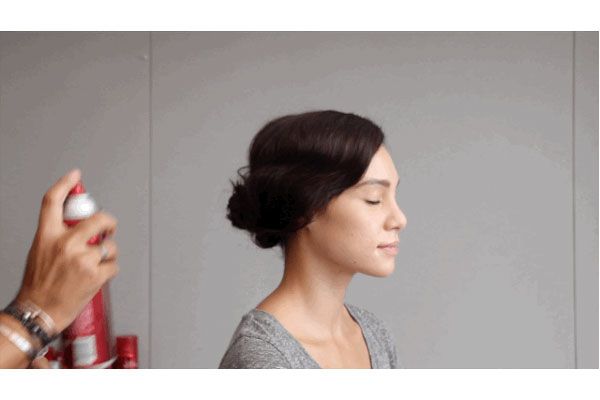 Step 8: For Keira, Skervin used Chanel clip-on earrings from the movie Atonement and pinned them to her hair. As Keira wasn’t available to lend them to us, we used a clip-on earring from Bauble Bar (this one is similar to the one seen on Keira). If you are using an earring as a hair adornment, Skervin recommends securing it with pins using the back of the clip-on closure. 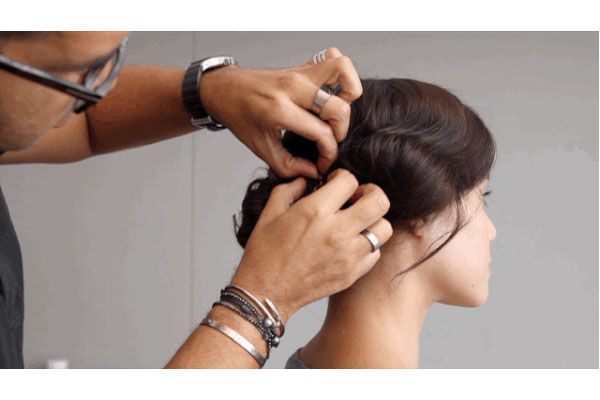 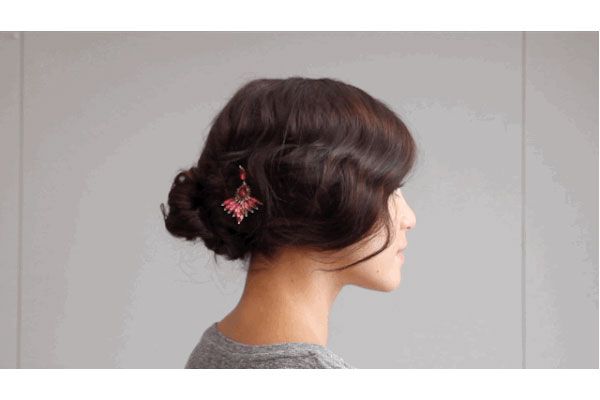 GIF Tutorial: How to Do a Mad Men-Inspired Holiday Updo

Beauty GIFs: How to Get Keira Knightley’s Updo

gone sale-ing 5:22 p.m.
10 Things You Don’t Have to Pay Full Price for This Weekend Deals from Neiman Marcus, Farfetch, Sephora and more.
art basel 5:19 p.m.
Suchi Reddy Actually Likes Art Basel for the Art Her latest installation was inspired by the Miami clouds.
are u coming? 4:42 p.m.
Art Basel Was Made for Madonna And I’m almost too hung-over to write this dispatch.
By Brock Colyar
5 questions with... 2:28 p.m.
Meet the Black Woman Who Built a 15-Year-Old Fashion Business Sherri McMullen’s Oakland luxury store is one of a kind. Here’s how she did it.
art basel 1:43 p.m.
Pharrell, Gigi Hadid, and More of the Bestest Party Pics This Week Celebrating with Fendi, Saint Laurent, and more.
uvalde 1:19 p.m.
What We Know About the Police Response to the Uvalde Shooting A class-action lawsuit by survivors against law enforcement asks $27 billion for “indelible and forever-lasting trauma.”
celebrity couples 1:00 p.m.
Finally, the Good Morning America Romance We Deserve Amy Robach and T.J. Holmes are now New York royalty.
friday sales 12:41 p.m.
22 Things on Sale You’ll Actually Want to Buy: From Alex Mill to Star Wars And a flower-shaped cat fountain that Strategist readers love.
celebrity 11:44 a.m.
Nia Long Is Not Happy With the Celtics In her first interview since the Ime Udoka scandal broke, the actress said she was disappointed with how the NBA team handled things.
always shopping 11:14 a.m.
17 New Year’s Eve Outfits That Aren’t Sparkly Yes, it is possible to wear something other than sequins.
fashion 10:56 a.m.
What to Know About the Balenciaga Ad Scandal The fashion house is under fire for two separate campaigns that consumers say promote child exploitation.
yikes 10:18 a.m.
Rebel Wilson, We’re Confused Her new loungewear collection isn’t size-inclusive … at all.
are u coming? 10:00 a.m.
At the Eagle With the Sniffies Zaddy One long night with the founder of the sluttiest gay cruising app.
By Brock Colyar
extremely online 9:55 a.m.
I Can’t Shut Up About This Giant Teddy-Bear Man Meet “Loving Bear Puffy,” a stuffed toy the size and shape of a human man.
2022 fashion year in review 8:00 a.m.
The Dad-ification of Fashion The “dad vibe” is all about comfort, function, and nonchalance, like an outfit you just threw on to run to Lowe’s.
always shopping 8:00 a.m.
Yes, Socks Are a Great Gift You don’t have to worry about sizing and it can make or break an outfit.
5 questions with... Yesterday at 6:24 p.m.
Ayesha Curry on Holiday Planning, Comfort Foods, and Her Healing Hut She’s teamed up with Bloomingdale’s to make the holidays easier.
keeping up with the royals Yesterday at 1:11 p.m.
Will and Kate’s Big Night Out (in Boston) The Prince and Princess of Wales received mixed reviews at a Celtics game on Wednesday.
2022 fashion year in review Yesterday at 12:59 p.m.
The Year in Viral Celebrity Fashion Rihanna redefined maternity, Florence Pugh showed us revenge dressing, and Heidi Klum was a worm.
royals Yesterday at 12:25 p.m.
How Does Boston Like Will and Kate? The royals received a mixed response at Wednesday night’s Celtics game.
More Stories