Screenwriter and political consultant Kate Stayman-London started the Tumblr Ladies Against Humanity as a feminist answer to the party game Cards Against Humanity (which positions itself as a “despicable and awkward” version of Apples to Apples). The site offers woman-oriented additions to the game’s deck of question-and-answer cards; recent ideas include “dumpsters overflowing with whimsical save-the-date magnets” and “a new cookbook by Sylvia Plath.”

Stayman-London says she’s bringing a missing voice to Cards Against Humanity, which was created by a group of men. And since launching six days ago, the site has had over 700,000 viewers and around 1,500 reader submissions.

We spoke with her about Ladies Against Humanity’s rapid popularity, Diva Cup humor, and realistic goals.

I was not working on this for a long time. No, seriously, my friend was just saying it just sucks that there aren’t more women, female-centric jokes in the cards. And I thought, Oh, I should have that job, and my friend said, “If you make the Tumblr, you will have that job.” And I thought, But I have things to do… That night we had 60,000 hits. Patient Zero on the tweets was Shelby Knox, who has 30,000 Twitter followers. Her tweeting about it was the first seeding of it.

Your day job deals with gender politics too, right?

I would say my political work at its best is dismantling systems that disempower people, and I hope that my writing does the same thing.

Some of the work I do in the political-consulting world is very serious work. I’ll be on a conference call about how can we help a trans student that’s been arrested in what may have been bullying situation, so I’ll get off that call and write a horrible joke about the Property Brothers.

Do you have an audience in mind when you write?

I try not to pander too much — the blog is really a reflection of my voice and things I find funny. I grew up on nineties TV, so those references are probably overrepresented. I really did name my breasts Lorelei and Rory (Lorelei’s a little bigger). I guess everyone knows that now. Hi, Dad. 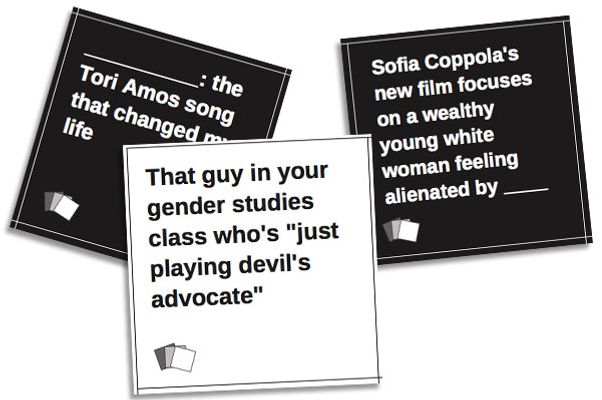 Do you ever feel the need to self-censor?

I’ve noticed that some of the darkest cards don’t get a lot of likes and reblogs. That honestly doesn’t bother me — I think it’s nice to have a range of humor on the site from the fluffier pop-culture references to the gross-out Diva Cup humor to the darker stuff. For me, the line is about who’s the butt of the joke. Hopefully, even my darkest jokes are skewering a misogynist system, or pointing out an absurdity or a hypocrisy or whatever. I’m not afraid of being offensive, but I never want to inadvertently reinforce the systems I’m trying to undermine.

Do you have a favorite card?

As a diehard Mets fan, I’m pretty partial to the one about “Stumbling on David Wright performing as Judy Garland in the East Village.” One of my best friends wrote that, and I just keep picturing it. I want it to be real so much.

Tell me about the sorts of things that come in via submissions. Do you get a lot?

There are 1,305 from the website form — “Mother fucking thigh gap” was the most recent. There are a couple hundred through e-mail and Twitter. Probably 1,500.

I enlisted a few friends to help me cull through the submissions and upvote the funniest ones. Some of them are just so brilliantly worded, like “The new Georgia O’Keeffe biopic, Yeah, That’s Not a Flower.” Some of them are great ideas but not perfect wording, so I tweak them a little but still credit the submitter. And some of them are just obviously, heartbreakingly specific to the person who submitted them: “Saying ‘Yes, I’ve come — don’t hold back!’ when you actually haven’t because you’re getting a bruise on your head from the wooden headboard.”

And men, too! Sometimes men are submitting really funny, really feminist cards. We aren’t going to fix a lack of feminist humor by only women writing feminist humor, and it’s really great to see men interested. 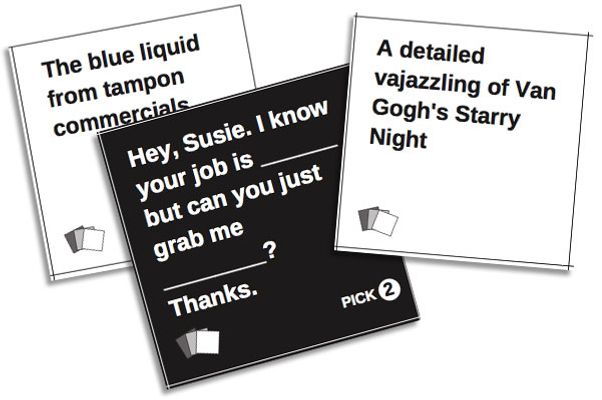 There’s something haikulike to me about the format.

I think the brevity of the format is great, because you know right away if something’s funny or not. It’s really instinctual humor, which is one of my favorite ways to write. You can just hear which words are funnier than others; sometimes I’ll land on the right thing right away, and other times I’ll have to try a whole bunch of options before I figure out what’s best. Like right now, I’m thinking about a black card: “What’s the one super weird thing that helps Emeril stay hard?” But is Emeril the funniest person?

Are you a big Cards Against Humanity player?

I absolutely love Cards Against Humanity. I actually keep my set in the trunk of my car at all times.

Have you played your version?

No! But that’s a great idea. People keep asking me when I’m going to print my own expansion set. I’m like, guys, first of all, I think that’s definitely illegal, and second, I don’t even know where I’d start with that. Maybe I could get a sponsor. AFSCME presents: Ladies Against Humanity. That sounds like a realistic goal.

Cards Against Humanity Gets a Makeover

marketing? 2 mins ago
Lingerie Ad Compares Bra to … Ryan Reynolds? Harper Wilde has pulled a truly bizarre endorsement (?) of their product.
spring fashion 5 mins ago
Everyone’s Dissolving Their Pillowy Filler Faces The filler era has ended. Now, everyone’s scooping out their face.
By Sangeeta Singh-Kurtz
why is your skin so good 18 mins ago
How This YouTube Beauty Executive Gets Her Skin So Good Chanel Tyler isn’t dubbed “the glow expert” for no reason.
beyonce 9:51 a.m.
Hope You’ve Been Saving for Beyoncé Tickets The Renaissance tour dates are finally here.
love and war 9:01 a.m.
What ‘Feminist Tinder’ Promised Bumble set out to make dating better for women. Did it deliver?
By Sangeeta Singh-Kurtz
ask a beauty editor 8:00 a.m.
‘I Love That Lipgloss Is Back, But Are There Any That Actually Last? ’ These are the longest-lasting glosses, according to experts. Follow their application tips if you want better wear.
spring fashion 8:00 a.m.
The Cool Tang of Ice Spice Visiting with New York’s princess of rap.
By Danya Issawi
celebrity Yesterday at 6:15 p.m.
Ashton Kutcher Finally Addressed Danny Masterson’s Rape Trial He hopes his That ’70s Show co-star is “found innocent of the charges brought against him.”
rust Yesterday at 4:00 p.m.
Everything We Know About the Rust Shooting Alec Baldwin and prop armorer Hannah Gutierrez-Reed have been charged with involuntary manslaughter.
spring fashion Yesterday at 3:00 p.m.
Vitamins for Virgos, Candles for Capricorns Truly everybody wants in on astrology.
obsessive tester Yesterday at 2:50 p.m.
Your Guide to the Best Tinted Moisturizers Summer is a makeup mind-set.
By Ashley Weatherford and Chinea Rodriguez
skin deep Yesterday at 2:27 p.m.
Are At-Home Beauty Devices Even Worth It? Should you microcurrent, LED, and microneedle at home?
spring fashion Yesterday at 12:00 p.m.
The Oh-So-Popular Popcorn Dress How a stretchy, nubby bodycon dress with aughts-era Limited Too vibes became the post-pandemic go-to splurge.
By Allison P. Davis
what we know Yesterday at 10:43 a.m.
A Seventh Officer Has Been Suspended After Tyre Nichols’s Death: Updates The officer was relieved of duty the same day the five officers charged with murder were fired for the beating.
celebrity babies Yesterday at 10:24 a.m.
So What Did Adam Levine and Behati Prinsloo Name Their Baby? We’d all like to know.
health Yesterday at 10:00 a.m.
How Our Definition of Healthy Fails Black Women What I’ve learned in my years as a dietitian.
spring fashion Yesterday at 8:00 a.m.
The Laundress Was Supposed to Be the Nice Detergent Until people started breaking out into hideous rashes.
By Emilia Petrarca
power Jan. 30, 2023
Marilyn Manson Accused of Sexually Assaulting a 16-Year-Old Girl In a statement from his attorney, Manson denied allegations he sexually assaulted the minor in 1995.
hairy situations Jan. 30, 2023
Wait, So Now Even My Hair Is Aging? Ugh.
documentaries Jan. 30, 2023
‘For So Long, I Had Larry in My Ear’ In an exclusive clip from Hulu’s Stolen Youth docuseries, Larry Ray survivor Felicia Rosario opens up about the impact of his gaslighting.
More Stories