Early in his tenure as editor of the New York Times’s “Modern Love” column, a journalist interviewing Daniel Jones likened him to a “male Carrie Bradshaw.” At the time, that wasn’t exactly right. Then best known for an anthology, The Bastard on the Couch, Jones had never heard of the fictional Sex and the City columnist. He thought he’d been compared to famed Steelers quarterback Terry Bradshaw, whom he idolized — but wasn’t Bradshaw also male?

Jones got the gig (appropriately enough) through his wife, the novelist and journalist Cathi Hanauer. She edited a 2002 anthology of women’s essays about marriage and feminism called The Bitch in the House; Jones followed that book with a male response, The Bastard on the Couch. The New York Times offered them a personal-essay column to edit as a husband-and-wife team — which they did for about a month, until Hanauer left to work on a novel.

Next month, HarperCollins will publish Love Illuminated, a survey of love’s big questions based on what Jones has learned from his perch at the country’s foremost platform for mushiness, heartache, and painfully acquired romantic wisdom. Drawing from Times columns and his own life, Love Illuminated has the informal, anthropological approach of early SATC and the barely contained sentimentality of late SATC. Jones spares readers gurulike prescriptions for love, instead offering the kind of natural authority that comes with nearly a decade on any beat, but is unusually reassuring in matters of the heart.

The Cut talked to Jones from his home in Northampton, Massachusetts, on Wednesday.

In revisiting all the old columns, did you have any favorites?

Two come to mind right away, from when I did college essay contests in 2008 and 2011. Each contest was such an immersion in the age I was dealing with. Reading them all in a month or two, the trends really leapt out. It was striking that the first time, the winner of the contest — which is representative of what was most on college students’ minds — was writing about hooking up, having one sexual relationship after another, and either not caring or trying not to care. How it’s all about the physical, with no emotion. Within three years, by the 2011 contest, people weren’t really writing about that anymore. They were writing about emotional relationships that were all online that had no physical aspect to them. That’s not to say they weren’t still hooking up all over the place, but what [they] would try to figure out were these relationships that are about having a bond with someone that maybe they met once — and in many cases, not at all — yet they spend all this time obsessing over them and never having sex with them.

Still, the one that got the biggest response was “What Shamu Taught Me About a Happy Marriage,” which was about a woman who used exotic-animal-training techniques on her husband. At the time — I’m not sure how long this record lasted — it was the most e-mailed ever article on the New York Times. It just stayed up there for weeks. 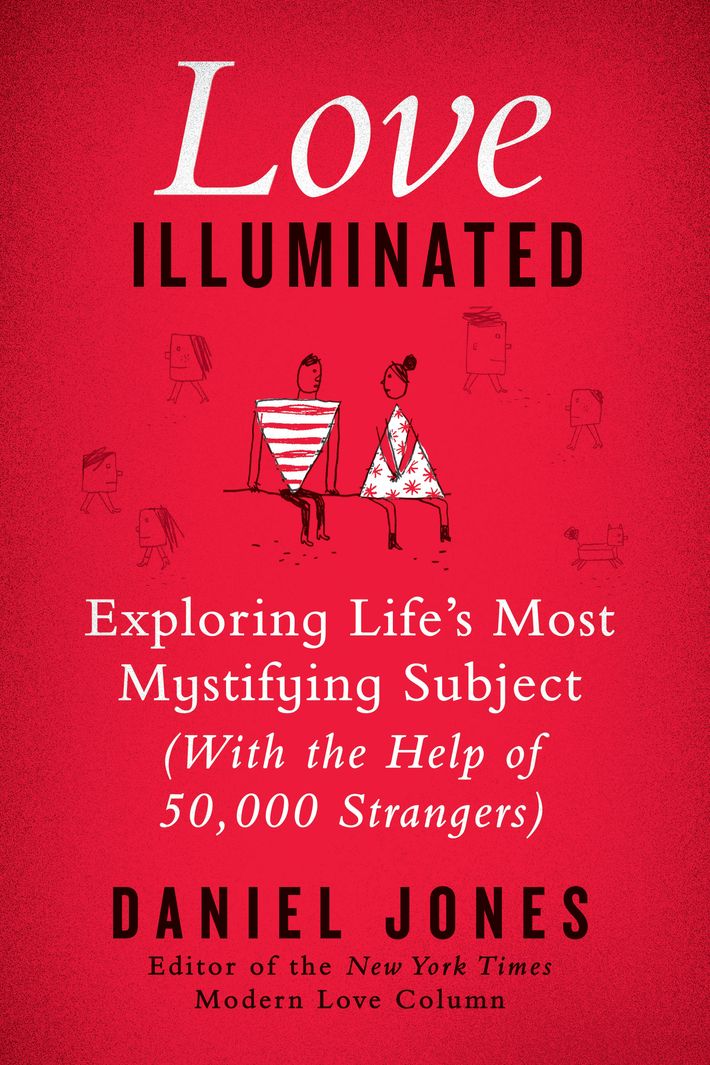 Are there any fact-checking challenges unique to publishing personal essays about love in the paper of record?

I want to feel to my satisfaction that it is true, that it happened, and that certain things are verifiable. But personal essays are one person’s opinion and memory, not a mutually agreed upon version of events. It depends on the essay. Some things are verifiable, some things are not. I routinely have long conversations with the writers and once in a while confirm certain things with their subjects. We can’t change names but we can take names out if they aren’t important to the story. Sometimes essays don’t happen because the people involved say, well, I don’t want you to write about that.

Wait, so once fact-checking forces writers to confront the subject of their pieces, they chicken out?

It’s not so much that they get scared off as they decide to honor that relationship. The essay turns out to be more disruptive than they expected. It can be completely surprising how someone reacts. One essay someone had written about their mother-in-law was a totally flattering portrait. She objected to being to being in their newspaper at all. Then, in a lot of cases, people don’t care a lot about how they’re portrayed, or they think what’s fair is fair, or they brag about it.

Do jilted lovers write in and complain about their treatment?

I can say that most often, you’re not writing a good self-examined personal essay if you’re blaming somebody. So a very low percentage of the essays, if they run, cause that kind of conflict. They’re usually essays where everyone is on board. If the essay is just sort of lobbing bombs — no.

Have both sides of the same story ever been told in “Modern Love”? His-’n’-hers essays, so to speak?

No. There was something that was started on Slate, “Modern Love Revenge.” They contacted people who were in pieces and tried to get their side of it, and they did at a few times. I don’t think it was all that explosive.

The submissions are a time capsule of what’s happening in relationships and how they’re changing. A struggle I’d never heard anything about was the transsexual experience — how they begin to go through sexual reassignment surgery and hormones, and how relationships survive that or don’t. That’s something I didn’t hear about for four or five years, and then I just started hearing about it all the time. It was a stark transition where it had really come into the public eye, and people are feeling comfortable writing about it.

I sort of wonder if the “Modern Love” column helps drive that. There’s this strange intimacy to having this extremely personal writing in such a public venue. For a certain kind of person, it makes them want to do that too. There’s sort of a herd effect. You write about one thing, then you start getting a whole lot more on that topic — people think, well, here’s mine. It’s a shame, because it doesn’t really appeal at that point unless it’s a very different topic.

What is the most popular topic in the submission pile?

There are broad subjects with a lot of areas to explore, but what I continually get is stories about Facebook during midlife marriage stress. People in their thirties, forties, fifties, experiencing a lack of passion, claustrophobia, kids taking all your attention, and the kind of fantasizing that Facebook brings out in them.

People can get a big response, but the response has really changed through the years. It used to be letters and e-mails to the Times. In some cases, we would get hundreds that I would then forward to the writer on Monday and Tuesday. That has pretty much dried up. The writers are much easier to find and get in touch with personally online, so I’m sort of out of the loop. But yes, in the past, people would get proposals and asked out on dates. It’s weird because people feel like they know the person.

Do you apply the lessons of “Modern Love” columns to your own marriage?

It’s going to be hard for me to be specific, but yes. The columns that I’ve picked out spoke to me in some way, and most of them stick with me as touchstones for certain experiences. I think it’s made me a more compassionate person. When you read someone’s account of something personal and you work with them on it, it’s hard not to feel sympathy and understanding for that person. But I don’t think it translates to me being some kind of idealized husband figure.

Do you think you’ll get sick of reading love stories?

I don’t know where the endpoint is. I’ve gotten better at it. The work with writers is always a good experience. The number of submissions has increased, so that strains me. I don’t have another reader, and they back up. I committed early on to responding to everyone — not personally to everyone, but responding to everyone — because I felt like I’d sent things and not gotten a response, and it makes you not want to send out again. If I wanted to get quality stuff, I needed to be responsible on my end. The number of people I need to personally respond to has skyrocketed.

Maria Bello recently came out in your column. How’d that happen?

She reached out to me through her PR person and wanted to talk about it. She had this essay all ready to go, and we worked on it a little bit, and then it was ready to go. It was sort of an over-the-transom submission. Coming out is not exactly a story anymore. Her story was more complicated than that, we were hoping it would be read that way, talking about partnership and family in a different way.

spring fashion 10 mins ago
Mei Kawajiri’s Very Extreme Nails  Her completely over-the-top talons landed her features in magazines and gigs backstage for Marc Jacobs, Tom Ford, Miu Miu, and Moschino.
By Maya Allen
fashion 11 mins ago
Do Not Show Up Late to the Marc Jacobs Show Lourdes Leon was apparently denied entry for arriving after the doors closed.
keeping up with the royals 10:53 a.m.
Will Harry and Meghan Get to Go to the Coronation? Sources suspect they’ll be invited; whether or not they accept is another question.
q & a 10:00 a.m.
Rachel Bilson Has Some Notes for The Bachelor The Accused actress and podcast host also talked about reuniting with her O.C. co-star Mischa Barton.
a choice? 10:00 a.m.
What Is Going On With Austin Butler’s Voice? I fear he may be stuck talking like Elvis forever.
extremely online 9:40 a.m.
I Can’t Shut Up About About Nancy Pelosi’s Hot-Dog Diet The former House Speaker also endorses ice cream for breakfast.
spring fashion 8:00 a.m.
The Woman Who Became McQueen The quiet ascendance of Sarah Burton.
By Cathy Horyn
culture 8:00 a.m.
This Is Pamela, Finally The model-actress’s memoir and documentary reveal only what she wants us to know. It’s about time.
By Roxane Gay
the wedding files 7:00 a.m.
At Georgia O’Keeffe’s Ghost Ranch, an ‘Epic’ Wedding No speeches, just dancing.
By Kaitlin Menza
¡hola papi! 6:00 a.m.
‘I Feel Abandoned by My Friend’ Hopefully the two of you can have a productive conversation that leaves you both in a healthier place.
By J.P. Brammer
power Yesterday at 9:16 p.m.
Dave Portnoy Has Dropped His Lawsuit Against Insider The Barstool Sports founder filed suit last year in response to allegations he filmed women without consent during sex.
culture Yesterday at 8:14 p.m.
Ellen DeGeneres Still Has a Lot of Famous Friends DeGeneres and Portia de Rossi’s vow renewal was officiated by Kris Jenner and attended by Prince Harry and Meghan Markle.
spring fashion Yesterday at 8:05 p.m.
Everyone’s Dissolving Their Pillowy Filler Faces The filler era has ended. Now, everyone’s scooping out their face.
By Sangeeta Singh-Kurtz
it's vintage Yesterday at 6:51 p.m.
How Well Do You Remember Y2K Trends? Put your millennial bona fides to the test.
and just like that Yesterday at 6:15 p.m.
What on Earth Is Happening on the Set of And Just Like That …? Aidan’s back … and smoking?
gone sale-ing Yesterday at 2:56 p.m.
10 Things You Don’t Have to Pay Full Price for This Week Some pre–Valentine’s Day shopping.
crime Yesterday at 2:25 p.m.
A German Woman Has Been Charged for Murdering Her Doppelgänger Authorities believe the crime was part of an elaborate plot to fake her own death.
power Yesterday at 2:03 p.m.
Eagles Player Indicted on Rape Charges Ahead of the Super Bowl, rookie lineman Josh Sills faces felony charges for rape and kidnapping in Ohio.
please clap Yesterday at 12:05 p.m.
Gisele Stays Winning She wishes her newly retired ex the best of luck in all his future endeavors [prayer-hands emoji].
spring fashion Yesterday at 12:00 p.m.
Starting Over With a Divorce Registry “We don’t see these things as gifts.”
By Kathryn Jezer-Morton
More Stories