We’re almost done, and thanks to the current whiteout, we’re excited to finally wear our L.L. Bean boots at least once this #NYFW. We’re sad to see all the good times end, but secretly glad we can retire that hashtag till September. For now, read our roundup of everything that mattered from yesterday.

1. We get that it can be hard to summon up any energy by the seventh day of Fashion Week. Luckily for most of the world, the Michael Kors show Wednesday morning was livestreamed, so you could have the best view of the show from the comfort of your desk. The pre-show livestream was so intimate that one Cut staffer could almost lip-read as Anna Wintour chatted with Blake Lively. Perhaps they were talking about their mutual love of the Cheesecake Factory?

2. All week long we’ve been waiting for two people: Chirlane McCray and Kanye. Bill de Blasio promised the first lady of  New York would “be at Fashion Week” but as the days wore on and she was nowhere to be found, we began to wonder if she might only show at Nanette Lepore (since she wore Lepore to the inauguration). Nope. Kanye West failed to show at both Alexander Wang and again yesterday at Jeremy Scott, where the Kanye-Is-Coming buzz was so strong that a phalanx of photographers guarded his empty seat, willing his arrival. Alas, he must have been busy doing a walk-through of Versailles. Now what was McCray’s excuse?

3. Some stars we expected didn’t show — and others showed up entirely by surprise.  We ran into Wallace Shawn (Mr. Hall from Clueless, the torturer from Princess Bride) on our way to the Marchesa show. We jumped into his cab as he was getting out — long enough to hear him whisper “take care” in that incredible Princess Bride drawl. 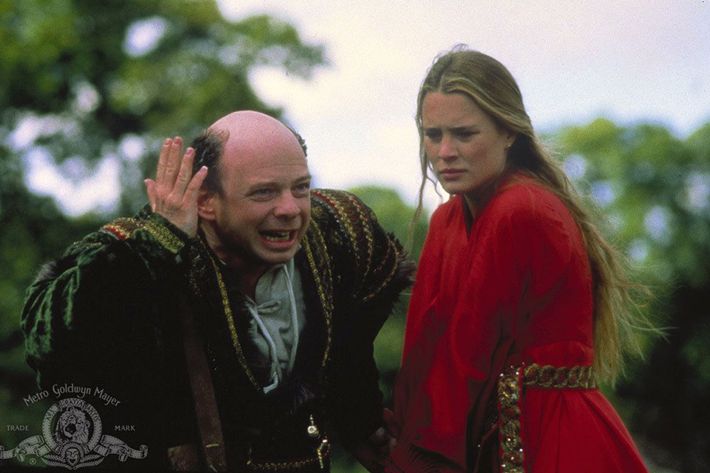 4. Old-school beauties Carolyn Murphy, Frankie Rayder, and Jacquetta Wheeler walked the runway at Michael Kors, looking just as gorgeous as ever — even in denim culottes. Whatever brand of juice they’re drinking, we want some.

5. No surprise, but Reed Krakoff brought out the big guns in the accessories department: mini-bucket bags and cobalt heels with fur strips down the back. The Fendi bug bag of next season?

6. Marchesa designers Keren Craig and Georgina Chapman collaborated with Christian Louboutin on their shoes this season. Perfect for Effie Trinket at a sex club in the year 2114. 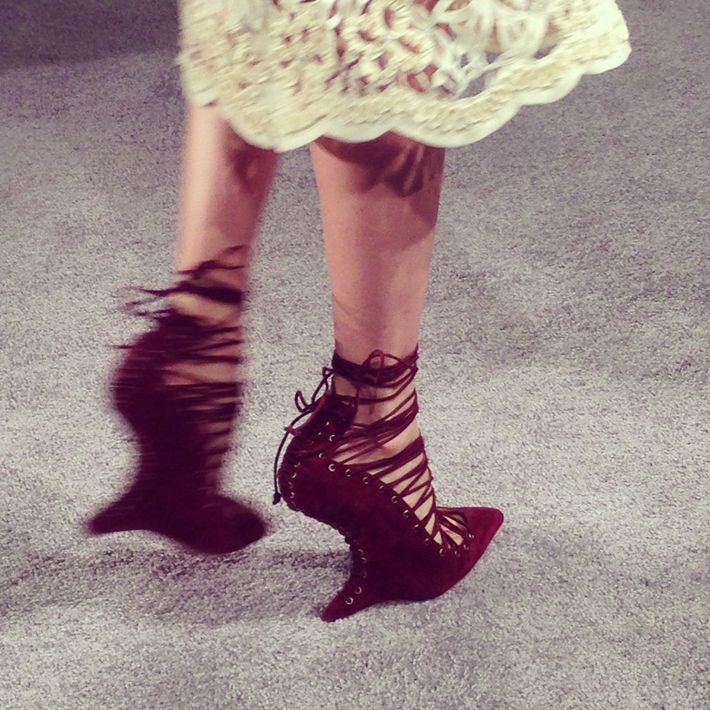 7. It seemed Jason Wu spent more time on his runway debut for Hugo Boss than he had on his own line. The looks at his debut collection for Boss were smart, sophisticated, and polished:

8. The last person to arrive at the Jeremy Scott show was the Patron Saint of Good Roots, Mr. Jared Leto. Afterward, he told us that the collection was “beautiful and wonderful and exciting,” adjectives that could have described anything at any point in history, ever. When asked if he would wear anything from the collection, he told us, “I’m sure I would,” though he wouldn’t say what. We nominate this:

9. Did Jeremy Scott get his inspiration from a jockstrap? You be the judge.

10. This Fashion Week, the Cut hired a virtually unknown young man named Joe Jonas, and asked him to write a few stories. Turns out the kid showed some talent, and today, our little ol’ Joe made it into the paper of record!

11. The inimitable Delfina Delettrez gave us a sneak peek of her new collection at Dover Street Market, including some gravity-defying diamond ear cuffs. They were very cool, but mostly we couldn’t get over her giant, green Oscar the Grouch fur.

13. The best thing we saw all day wasn’t related to Fashion Week: Shoshi Olympics superimposes pictures of Shoshanna from Girls onto Olympians’ bodies. Drop everything (after you read this) and enjoy. 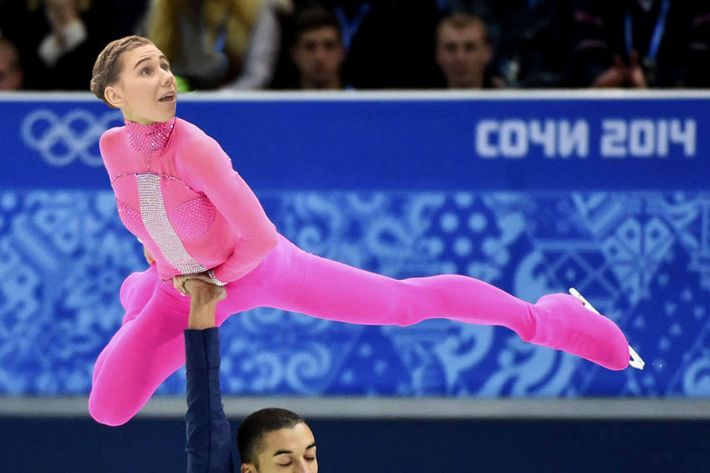 14. A crazy red light bathed the guests at Proenza Schouler before the show, turning our violet lipstick into a sickly brown. It was soothing, if not completely random. No matter, because it made for excellent selfies. #nofilter 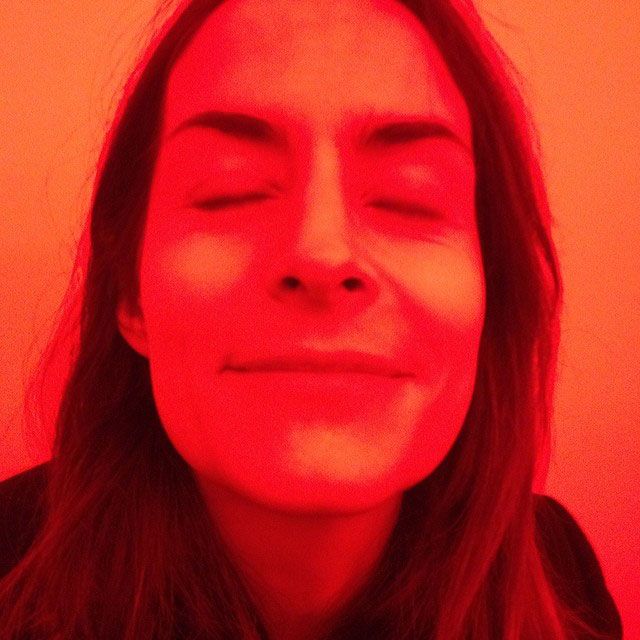 And that’s it! Only one day left. Let’s make it epic, fashion friends.

sustainability 8:00 a.m.
How Interior Designers Make the Most of Facebook Marketplace All you need is a little patience and lots of scrolling time.
collaboration station Yesterday at 6:47 p.m.
Welcome to the Inside of Ye’s Mind Here’s a look inside Yeezy x Gap’s Times Square takeover.
encounter Yesterday at 5:36 p.m.
Alex Wagner Is Ready for Anything The 44-year-old journalist meets her moment as the new face of MSNBC.
By Karen K. Ho
gone sale-ing Yesterday at 3:20 p.m.
Your Wedding Dress-Code Woes Are Solved Reformation is offering up to 40 percent off select items.
cousin greg Yesterday at 3:01 p.m.
Nicholas Braun Has Gone Too Far Cousin Greg dressed up as beloved Friday Night Lights hunk Tim Riggins for W’s TV Portfolio.
power Yesterday at 2:56 p.m.
Florida Court Finds Teen Not ‘Mature’ Enough to Choose Abortion The court will force her to give birth instead.
crime Yesterday at 11:51 a.m.
What to Know About R. Kelly’s Latest Sex-Abuse Trial The singer is headed back to court in Chicago, this time for the alleged creation of explicit videotapes with minors.
breakups Yesterday at 10:48 a.m.
Florence Pugh and Zach Braff Are No Longer Dating In a new interview, Pugh revealed they quietly separated earlier this year.
celebrity Yesterday at 10:40 a.m.
A$AP Rocky Has Been Charged With Assault The musician faces two counts of assault with a semiautomatic firearm stemming from a November 2021 incident with a former friend.
the bachelorette Yesterday at 10:37 a.m.
The Realest Bachelorette Rejection of All Time This episode felt like a big step forward for the franchise.
love island Yesterday at 10:00 a.m.
An Ode to Ekin-Su, TV’s Best Reality Star This season’s Love Island winner is so much more than a wannabe influencer.
sustainability Yesterday at 10:00 a.m.
How to Afford The Row: A Guide Stylist Neelam Ahooja shares her methodology behind building a wardrobe that prioritizes conscious consumerism on a budget.
allegations Yesterday at 9:30 a.m.
Unpacking the Allegations Against Ezra Miller The actor released a statement saying they started treatment for “complex mental health issues.”
breakout Yesterday at 9:00 a.m.
Marisa Abela Is Ready to Take Up Space The Industry star reflects on growing up and landing a part in Greta Gerwig’s Barbie.
By Brooke LaMantia
sustainability Yesterday at 8:00 a.m.
What Is the Weird-Girl Aesthetic? It’s maximalism’s quirky little sister.
love and war Yesterday at 8:00 a.m.
The Astrology Reading That Blew Up My Life A stranger told me my soul mate was a Parisian born on November 2, 1968. So I booked a flight.
By Natasha Sizlo
trump family Yesterday at 6:00 a.m.
The Last, Lonely Days of Ivana Trump Her friends wish she’d never met the rakish young Italian they called the “snake.”
By Nina Burleigh
breakups Aug. 15, 2022
Michelle Branch Files to Divorce the Black Keys’ Patrick Carney She took the step a day after announcing their split online.
celebrity weddings Aug. 15, 2022
Bennifer Is Getting Married (Again) The follow-up party to their small Vegas wedding is happening this weekend in Georgia.
celebrity Aug. 15, 2022
Bella Hadid Isn’t Afraid to Speak Out About Palestine Anymore The model said many companies have stopped working with her following her advocacy.
More Stories