Kate Upton’s two boobs are a source of fascination to many. In fact, for her first feature-film role in The Other Woman, Upton’s character is immediately referred to as, simply, “boobs.”

She calls them “the ladies,” but they aren’t particularly treated as such. Humans like to explore the limits of the things that fascinate them, and in that spirit, Kate Upton’s breasts have been treated as a science experiment. They’ve been sent on roller-coaster rides, turned into a marine habitat, and, most recently, propelled into zero gravity for Sports Illustrated. And why? Just to see if they would survive these trials? Well, they did.

Besides being subjected to innumerable hideous bras, countless photo shoots with no bras, and a parade of tight clothes, Kate Upton’s boobs have also been:

• Thrown into zero gravity, providing a “euphoric” experience for the photographer.

• Treated as a jungle gym by a baby monkey and other assorted wild animals.

• Employed as a marine-wildlife habitat.

• Placed in freezing temperatures in Antarctica, poorly covered, of course.

• Reused without her permission.

• Nearly poked by a rake of sorts that Arnold Palmer was holding. 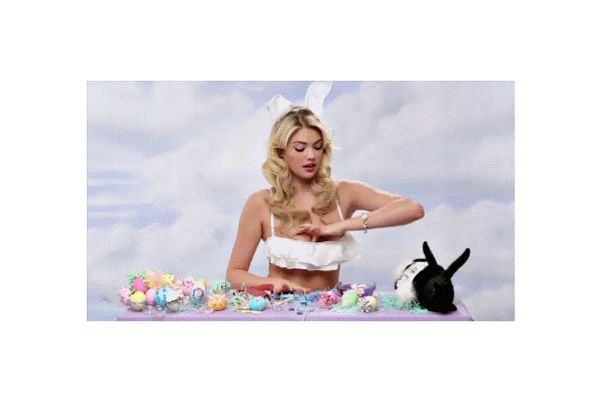 • Forced to lay an egg to entertain a bunny.

• Spliced into a 10-hour-long YouTube video of just bouncing.

• Subjected to a variety of roller coasters as part of Terry Richardson’s thinly veiled attempt to use movement to force some sort of wardrobe malfunction.

• Robbed of proximity to a cross because of some photographer’s rudeness.

• Objectified by cockroaches in this Zoo York commercial.

• Used as a cup holster.

• Made to hold this explosion of glittery jewels.

Supposedly these are the breasts to test. Have we learned anything?