I was standing at a party, chatting with friends, when a man walked directly through our circle and announced, “Maureen O’Connor! You dropped our conversation on Tinder.” What happened next is a blur of awkward terror. (“You look different.” “Because I’m 30 pounds heavier now?” “And you look great! If I’d known, I would have replied.”) The fourth wall of online dating had been broken. “Oh, I know you,” a stranger chimed in. “My co-worker got you on Hinge, but that conversation fell apart, too.”

Last year, the rise of swipe-right dating apps was a breath of fresh air in the often-exhausting world of online dating. Low commitment, pleasantly superficial, and actually fun (“Keep Playing,” Tinder prompts at regular intervals), these apps offered a thrilling sense of freedom and lightness — then paired it with Facebook for accountability in photo selection and lists of mutual friends. But as the novelty wears off and swipe-right dating apps become fully integrated into the social landscape, they have developed their own fatigues and faux pas. 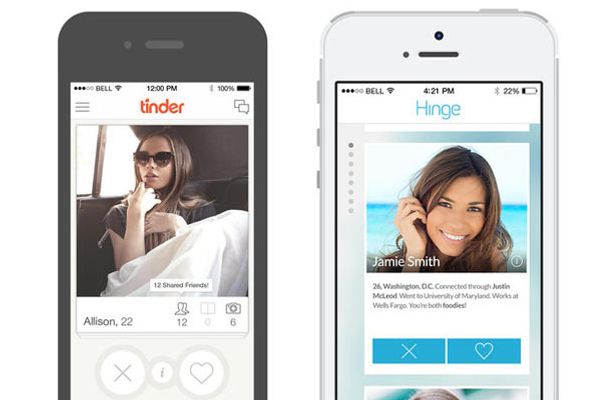 If Tinder is the equivalent of striking up a conversation at a neighborhood bar, then Hinge is the equivalent of meeting at a mutual friend’s house party. Whereas Tinder lists mutual Facebook contacts when they exist, Hinge only matches users who share Facebook friends. It provides full names, work, and education information gleaned from Facebook. (Tinder veterans: If you have ever searched the Facebook friend list of a Tinder “shared contact” to network your way to the full name and profile of a prospective date, then you have performed an analog version of Hinge.) Mutual friends are listed with buttons labeled “Ask!” to encourage behind-the-back social vetting. Back in 2009, the novelist Walter Kirn wrote an essay about friending “the pretty single women who appeared during my initial surveys of my literary acquaintances’ Facebook lists,” until he ended up with a girlfriend. I dimly recall thinking that essay was creepy when I first read it. Four years later, it could be an elevator pitch for Hinge.

As technology, Hinge is horrible; it crashes constantly and messages routinely disappear or send without warning. But users persist anyway. In systematizing the formerly unsavory act of creeping around Facebook looking for dates, Hinge makes indulging your inner Walter Kirn acceptable. What’s more, matches from your extended social network can be unnervingly good: My first Hinge date was with a man I had so much in common with, he actually convinced me we had already met, at a social event he deduced I would have attended. The lie was so brilliantly constructed, I felt compelled to reward him with a date.

But that Saturday I discovered the downside of dating apps’ high-volume browsing advantage: By systematically exposing myself to every single man in my extended social network, I had achieved romantic notoriety without going dates with any of the people in question. It was the worst kind of bad reputation — the kind you didn’t even have the fun of earning.

Among Tinder’s most intoxicating assets is the illusion it creates of a never-ending supply of eligible dates. Sorting dates has become my go-to tool for cell-phone procrastination and entertaining myself while in line at Duane Reade. Before dating apps, I used those moments to browse Twitter, text my mom, and learn languages on DuoLingo. Now I just rate men. I rate men when I wake up in the morning. I rate men before I go to bed at night. I reject men at the bus stop. I block boring conversationalists between courses at dinner. It’s not that I’m disproportionately desirable on Tinder; at least as many men, if not more, have dropped conversations with me than I have with them. It’s a rejection free-for-all.

This is, in part, because dating app rejection is relatively gentle. The time investment is minimal so the stakes are low; the humiliation is softened because you’re not face to face; and there is an infinitely renewable supply of new people to distract you from the ones who slipped away. You can be superficial. You can be brutally efficient. You can walk away from anything. You can’t always forget, though, particularly if the match in question shares 18 “hinges” and is somebody you dimly know. When that happens, you may have no choice but to memorize her name and face, so that you may shout her down at a party later.

I have made 45 matches on Hinge and 186 on Tinder. I have met five in person, including the man who shouted me down at the party. When I got home, I pulled him back up on Tinder. “The stress of getting called out on my Tinder game in public TOTALLY RUINED my night. You now owe me one amazingly glorious date,” I wrote.

“I apologize but not really,” he replied. “I can’t tell you how cathartic that whole experience was. Are you free this week?”

How to Ruin Your Social Life With Dating Apps

power 16 mins ago
Everything to Know About the WNBA Star in Russian Custody After her months in detention, Brittney Griner’s trial will begin on July 1.
the bigger picture 3:15 p.m.
Thirty Years of Community — Not Cops or Corporations — at the Dyke March Scenes from this weekend’s anniversary march in New York City.
By Melissa Kravitz Hoeffner
jussie smollett 3:12 p.m.
What Was Jussie Smollett Doing at the BET Awards? The star, who was found guilty of staging a hate crime in 2019, appeared on Sunday’s red carpet.
celebrity 3:08 p.m.
Ireland Baldwin Opens Up About Her Abortion “I chose me, and I would choose me again.”
celebrity 1:34 p.m.
Ben Affleck Is Looking for Reasons to Be Stressed Why else would he let his 10-year-old son get behind the wheel of a Lamborghini?
budgeting 1:00 p.m.
This Wedding Season Is Going to Cost You Budgeting for someone else’s big day.
By Emma Turetsky
why? 12:20 p.m.
Alec Baldwin Has Taken It Upon Himself to Interview Woody Allen This seems like a bad idea, but carry on.
brooding 12:00 p.m.
What Even Is a Resilient Child? An unexpected Instagram exchange made me consider how growing up with social media affects kids.
bet awards 11:27 a.m.
Jazmine Sullivan Wants Men to Talk About Abortion Too Presenters at the BET Awards were outspoken about the loss of Roe — but the men were noticeably silent.
gone sale-ing 10:00 a.m.
Tatcha Lovers, It’s That Time of Year Again All its products are on sale, but today’s the last day!
how i get it done 7:00 a.m.
How Pro Wrestler and WWE Superstar Bianca Belair Gets It Done And a message to the Rock: You need to put her in your next movie.
By Jane Starr Drinkard
astrology Yesterday at 8:30 p.m.
Madame Clairevoyant: Horoscopes for the Week of June 27 Early Tuesday morning, Neptune retrograde begins. For better or for worse, you’ll have to reckon with the world as it actually is.
By Claire Comstock-Gay
sex diaries Yesterday at 8:00 p.m.
The Editor Tidying Up Just in Case His Lover Calls This week’s sex diary.
wtf Yesterday at 6:08 p.m.
A Truck Driver Ran Into Pro-Choice Protesters in Iowa Other protesters across the country reported instances of violence, including excessive force by police.
abortion Yesterday at 3:27 p.m.
Celebrities, Activists, and Politicians React to the End of Roe The Supreme Court’s Dobbs decision has, as expected, overturned our constitutional right to abortion.
abortion rights Yesterday at 3:19 p.m.
Olivia Rodrigo, Megan Thee Stallion, and Phoebe Bridgers Send SCOTUS a Message The singers expressed anger at the Dobbs decision during their Glastonbury sets.
pride Yesterday at 8:00 a.m.
Why I Won’t Be Wearing Pride Merch Today Each year brands roll out Pride collections, which are often maximalist and just about always an eyesore.
life after roe June 25, 2022
Rage, Fear, and Hope Outside the Supreme Court “We understand that poor women and women that are Black and brown are going to pay the most for this repeal. That’s why we’re here.”
life after roe June 25, 2022
Scenes From Friday’s Abortion-Rights Protest Outside the Supreme Court “I deserve access to health care. My daughter deserves access to health care.”
By the Cut
life after roe June 25, 2022
‘Get in the Streets and Stay in the Streets!’ Abortion-rights protesters channel their rage in Washington Square Park.
By Sarah Jones
More Stories