After bonding while working late hours at Vibe and discovering they had written similar school papers on hair and its deeper cultural and sociological meanings, Lori Tharps and Ayana Byrd published their book Hair Story: Untangling the Roots of Black Hair in America in 2001. The book spans the period from 16th-century Africa to America in the early part of the new millennium.

Last year, though, the authors realized that with the increasing popularity of the internet over the decade since the first edition was published, the conversation about black hair had suddenly changed. At the end of January 2014, they published a revised and updated edition of the book. The Cut talked to the two women about what they want people to learn from Hair Story and the influence the internet has had on the perception of black hair.

Why did you decide to write this book in the first place?

Lori Tharps: I knew there was more to black hair than just style. I wanted to figure out the economics, the politics, the culture of black hair in America … why it seemed like black people and white people were living in two completely different worlds when it came to hair. Ayana was interested in the sociological impact of the European beauty ideal on black women and their feelings of self-worth and self-confidence. We were both obsessed with the backstory of black hair and wanted to document it, so that’s what we did. We always say, “If black hair could talk, this would be its story.”

Ayana Byrd: We met at Vibe in the fact-checking department and that was when we realized that we’d both done these separate projects. I had cut all of my hair up, and I was feeling crazy. After an entire lifetime of having long hair I suddenly had two inches of hair. It really impacted how I felt about myself, my confidence, my identity, and all of these things that I never thought would be connected to a haircut.

What prompted you to decide to update the book?

AB: The internet! The word internet does not exist in the original version of the book. It had no reason to be in there when we first wrote it in 2000. There is now this whole natural-hair movement that did not exist that was really getting a lot of its life on the internet. There were also places like Birchbox and Sephora, and independent websites. Black female entrepreneurs who made hair products were finally finding distribution a lot easier than it had been before. I used to trek to Bed-Stuy, Brooklyn, to Lisa Price’s house to buy Carol’s Daughter out of her kitchen. Only 13 years passed, but because of the internet we could have written five more chapters about this community of black hair that was springing up online. When we first met, we always spoke about how if you watched The Brady Bunch growing up you saw Marcia brushing her hair 100 times every night. I don’t even own a brush! That has nothing to do with how I do my hair. But I knew how white women take care of their hair. I knew all these practices just from being a part of pop culture, but you didn’t learn that about black hair. So we felt like, with the internet, more people were more interested and educated about black hair.

LT: The new access to black hair wasn’t just on the internet. [There was] Chris Rock’s movie Good Hair, and  a lot of other new artistic expressions, but still a gaping hole of knowledge. Non-black people don’t know what’s going on when it comes to black hair. In 2007, we had incidents like Don Imus calling the Connecticut basketball team “nappy-headed hos,” and that caused a huge uproar. People didn’t realize that it was the “nappy” not the “hos” that got so many black people upset. We still have black men, women, and children fired from jobs and sent home from school because of their hair. And of course there’s the Obamas. Michelle Obama’s hair is always a topic of conversation. There are still so many questions about black hair in America. 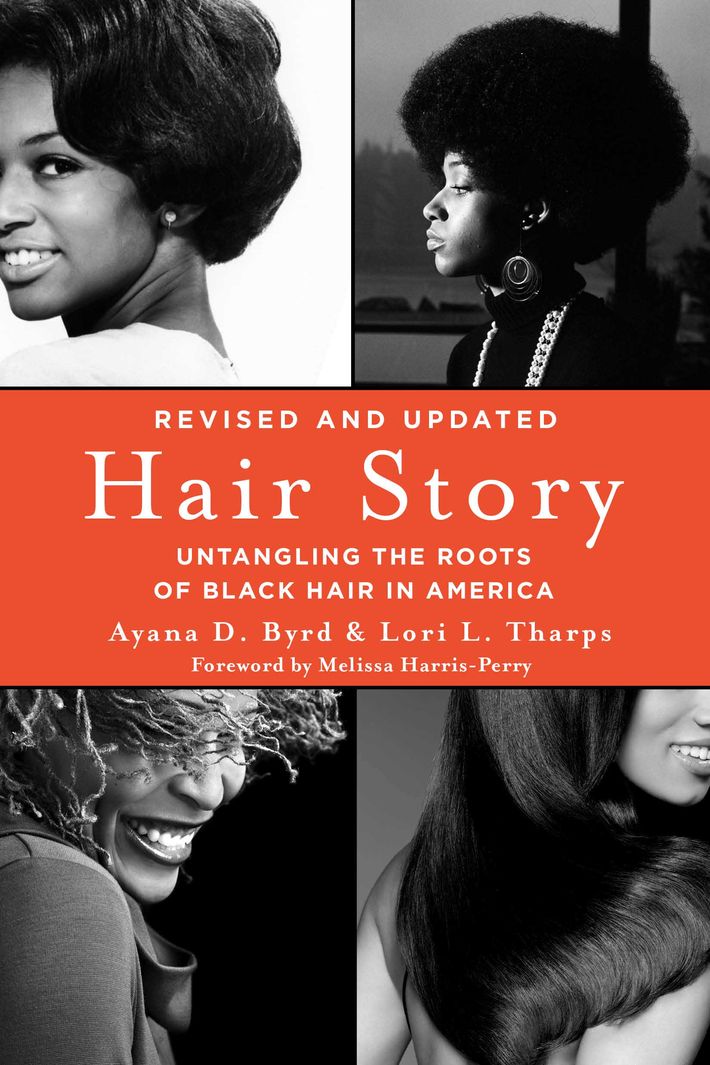 One of the topics that always generates a lot of discussion online is natural hair. How do you guys define “natural hair”?

AB: We often get in trouble talking about this. I usually define natural hair as what grows out of your head without adding any chemicals. But now I hesitate to say that because I consider myself natural, but I have all sorts of color in my hair that I was not born with. So it means you haven’t altered the texture of it.

LT: I liken it to people who are vegetarians versus vegans. If you’re vegetarian, you don’t eat meat, but maybe if your mom puts chicken stock in the beans you’ll eat that. But if you’re vegan, you’re hard-core. There’s no give. The natural-hair movement has plenty of vegetarians in it, and then there are the vegans. The problem we have in this natural-hair community is people want to be the gatekeepers of who is natural and who is not. And there is such a variety of what one can do with black hair and that’s what makes it so wonderful. This kind of policing of natural hair comes more from the idea that if you are natural you are embracing your blackness to a certain extent. If you are putting in weaves or straightening it or even coloring it, somehow you are still falling into the trap of wanting to have European-looking hair. That’s why Ayana and I wanted to write our book. It was to make people understand how exciting and glorious and versatile and beautiful black hair is.

How do celebrities influence perceptions of black hair?

AB: In one way I think it’s positive that celebrities — like Beyoncé and Rihanna in particular — have pushed a lot of the secrecy away about women who wear weaves. Twenty years ago if you had a weave, it was your secret. There was this idea of secrecy and shame around it not really being your hair. Rihanna posts things on Instagram like, “New week, new weave.” I’ve seen her do that a couple of times. When Beyoncé’s videos came out, she had a different hairstyle in almost every scene. Celebs are a major reason why we have the open-door policy about talking about whether your hair’s been purchased.

So many controversial conversations take place on social media. How does this play a role in the conversation?

LT: The biggest problem that we’ve seen when it comes to black hair is how social media is talking about black hair on children. That’s what we find extremely distressing. Their hairstyles are barely formed, and we see people talking about Beyoncé’s baby’s hair or Zahara Jolie-Pitt. These are little children, and we are criticizing and critiquing their hair. There’s no excuse for it. It’s about really damaging our young black girls’ self-esteem and self-image.

AB: For Blue Ivy and Zahara, the attacks are usually on their mothers. It’s vicious. Adults know better than that, but when you get Twitter in someone’s hand, we revert back to things we were doing in sixth grade in the school yard.

What’s the message you want people to take away after reading your book?

When we wrote this book there were a lot of cultural history books coming out, like the history of salt and the history of lipstick, and even garbage. We were like, “This book belongs in that same pile.” The black hair story is truly an American story.

Q&A: The Women Who Wrote the Book on Black Hair

power 5:48 p.m.
Andrew Cuomo Sexually Harassed Women, According to New Investigation A new report by State Attorney General Letitia James’s office details misconduct allegations from 11 women.
congrats 3:58 p.m.
Amanda Knox Is Having a Baby She and her husband announced the news via podcast.
the cut podcast 3:04 p.m.
Why Does the Internet Hate Black Women? In this episode, exploring the mental-health impact of misogynoir.
By the Cut
sports! 2:22 p.m.
The Best Things We’ve Seen at the Olympics So Far A swim coach horny for gold, teens shredding the skateboarding category, and more.
tastemakers 2:14 p.m.
The CEO Who’s Buying Our Used Clothing Kristy Caylor says that fashion’s “old way is broken.”
big lil boys 2:13 p.m.
Introducing Bigger Sean The rapper says he grew two inches taller?
scent memories 2:08 p.m.
Jackie Aina Loves the Scent of Oud and Having Secret Perfumes Talking to perfume snob herself.
self 1:26 p.m.
Thank You for Talking About Your Botox An ode to the public service of keeping it real.
By Claire Zulkey
bitch better have my money 1:24 p.m.
The Only Acceptable Billionaire Rihanna is officially worth ten figures.
power 12:40 p.m.
Cori Bush Kept Millions of People From Losing Their Homes The freshman Congresswoman slept on the Capitol steps for days, pushing the White House to extend the eviction moratorium.
art and soul 12:34 p.m.
An Awakening in Aspen Colorado’s frenetic art scene is drawing comparisons to the Hamptons and Palm Beach, but it’s also facing familiar growing pains.
By Laura van Straaten
bibbidi bobbidi boo 11:45 a.m.
Girlboss Bravely Contemplates Wearing Pantsuit to Ball The new Cinderella trailer has arrived.
gone sale-ing 10:30 a.m.
I’ve Already Started My Fall Shopping Thanks to Nordstrom’s Anniversary Sale From Rag & Bone accessories to the perfect block-heel boots.
By Asia Milia Ware and Olivia Evans
auto-refill 10:00 a.m.
The 11 Products Cosmopolitan’s Beauty Director Uses to the Last Drop Julee Wilson’s go-to lipstick has a ten-hour wear time.
By Daise Bedolla
eat the rich? 8:00 a.m.
Salt Fat Acid Paris Paris Hilton’s new cooking show? That’s hot.
black beauty matters 8:00 a.m.
Welcome to Black Beauty Matters A series celebrating Black excellence and influence in beauty.
By Lindsay Peoples Wagner
fiction 8:00 a.m.
Other People’s Kitchens In this original piece of fiction from Bryan Washington, a private chef spends lockdown cooking for Houston’s wealthiest.
By Bryan Washington
power Yesterday at 7:49 p.m.
USA Gymnastics Isn’t in Charge of Its Future Simone Biles’s moves at the 2020 Tokyo Olympics are a sign of what’s to come for the sport, its governing body, and its athletes.
the object of our affection Yesterday at 7:40 p.m.
One-of-a-Kind Sunglasses Built for Home Improvement Wear a level on your face.
power Yesterday at 6:19 p.m.
We’re Done Here  It’s time for Andrew Cuomo to go.
By Camonghne Felix
More Stories