As soon as I saw the doe-eyed mother played by Cristin Milioti walk into MacLaren’s Pub in her wedding dress, I knew this ending was going to blow hard. Milioti, who’s beautiful, was for some reason clad in ill-fitting, high-shine poly-satin (?!): It practically sounded a death knell in my head.

It looked like a bad costume rental; probably handmade, based on the side view. The glare of studio lights on the fabric seemed to expose the glitches of an amateur sewing job. It appeared to slightly shirr along the seam. “Is that a huge snag in her dress?” I wondered. No, the freeze-frame revealed: It was just an unfortunate seam job joining the bias train. It didn’t fit her body as well as the silhouette could have. And lo and behold, the hem: The dress wasn’t even properly hemmed. 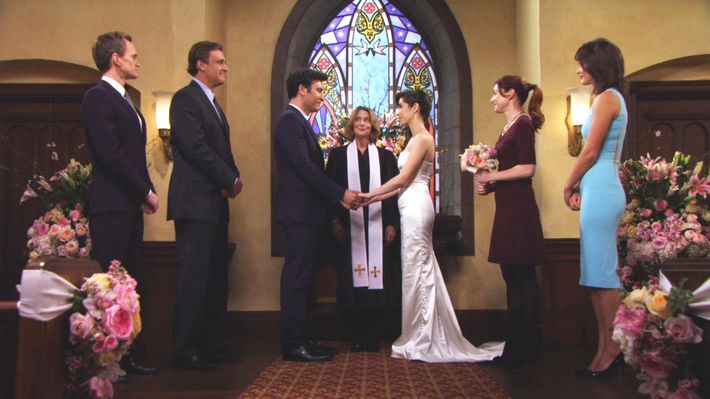 We receive our last image of the two clasping hands and exchanging vows — and she appears to be wearing slight platforms in order to mitigate her too-long dress, which should be just grazing the ground at her toes. This is the title character of a beloved nine-seasons-long show!

While some fans are complaining about the way the episode resolved the show’s arc (Really? That was the culmination of all that brilliant repartee and narrative curve-balling?), I am taking arms against the show’s stylist and art director for such a gross oversight. While the plot line called for a last-minute wedding dress, couldn’t the costume department have afforded a different dress or, at the very least, a tailor? If only to stay on par with that other leading lady’s Monique Lhuillier gown. 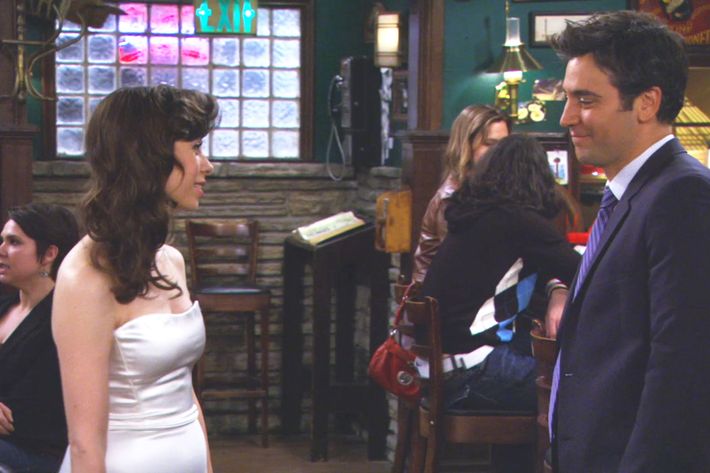 E!, who approved of the dress, spoke with the show’s stylist, Reiko Kurumada:

While I appreciate the intended simplicity, the rest of Kurumada’s comments give me pause:

Mrs. Mosby deserved to wear something befitting of both her body and the mythology built up by the hapless Ted Mosby. And we, like Ted, had waited in suspense for the universe to perform its grand reveal. The very least this woman deserved was something equal to that.

I don’t mean something fussy. But at least let me bury the memory of her in a funeral bier of real, ivory satin. Natural fibers, please.

what we know 26 mins ago
Texas Officials Acknowledge Botched Police Response to School Shooting The local police chief in charge delayed confronting the gunman — while kids trapped inside the classroom repeatedly called 911 asking for help.
burnout Yesterday at 4:00 p.m.
When to Just Quit Already How to figure out it’s time to move on — and be okay with it.
uvalde Yesterday at 2:40 p.m.
What We Know About the Police Response to the Uvalde Shooting Authorities have now said that not breaching the classroom the shooter occupied for more than an hour was “the wrong decision.”
obsessive tester Yesterday at 2:24 p.m.
I’m On the Hunt for the Best Sunscreens Without a White Cast These are my current favorites.
gone sale-ing Yesterday at 2:10 p.m.
I Didn’t Know Luxury Until I Got These Linen Sheets And they are currently 15 percent off.
q&a Yesterday at 2:00 p.m.
Is Somewhere Good the Future of Social Media? We spoke to Annika Hansteen-Izora, the designer of the app, about slowing down and truly connecting.
as told to Yesterday at 1:48 p.m.
How Teachers Talked About Uvalde With Their Students After the Texas school shooting, educators share their fears and frustrations.
By Bindu Bansinath
style Yesterday at 1:41 p.m.
The Best Looks From the Cannes Film Festival All hail the ball gown.
action item Yesterday at 1:15 p.m.
How to Help the Uvalde Community From supporting Robb Elementary School families to pressing for gun-control legislation.
gun control Yesterday at 1:06 p.m.
Jacinda Ardern’s Commencement Speech Could Not Be Timelier “We knew we needed significant gun reform, and so that is what we did,” New Zealand’s prime minister said.
q & a Yesterday at 12:36 p.m.
Meet Koa, the Beauty Brand Celebrating Hawaiian Culture The company is making it a priority to share the culture of Hawaii with the world.
celebrity Yesterday at 12:27 p.m.
Another Celeb Has Shared Their Thoughts on Depp v. Heard Dominic Fike said during a performance that he has “visions” of Amber Heard “beating me up.”
gun violence Yesterday at 12:24 p.m.
The Supreme Court May Be About to Expand Gun Rights Even More In June, the Court could rule New York’s concealed-carry-license regulations unconstitutional.
i tried it Yesterday at 12:00 p.m.
Can Reciting a Daily Mantra Make You Treat Yourself Better? For weeks, I’ve been repeating kind messages to my reflection.
father's day Yesterday at 10:28 a.m.
What Our Editors Are Gifting Their Dads Spoiler warning for Cut dads.
gun control Yesterday at 9:45 a.m.
The NRA Will Still Hold Its Conference in Texas This Weekend Ironically, attendees will not be allowed to bring guns to the event.
health Yesterday at 8:49 a.m.
The Baby-Formula Shortage Won’t Get Better Anytime Soon FDA commissioner Dr. Robert M. Califf said that shelves should be restocked by late July.
encounter Yesterday at 8:00 a.m.
The Hostess Who Kept Their Secret Grace Faison — the 97-year-old Brooklyn Heights fixture — opens up about secretly housing women seeking illegal abortions in the late ’60s.
By Eliza Gray
lawsuits May 26, 2022
Amber Heard Says Her Defamation Trial Is ‘Humiliating’ and ‘Painful’ On the last day of testimony, Heard again denied claims from Team Depp that she lied and falsified evidence.
uvalde May 26, 2022
‘As Teachers, We’re Expected to Put Our Lives on the Line’ An educator near Uvalde feels the weight of the Texas school shooting.
More Stories