What could serve as a palate cleanser after twisted, non-consensual twin sex? How about taking a moment to appreciate the bond between Tyrion and his squire, Podrick Payne? They’re a reminder that, at the very least, friendship, loyalty, and hard cheese exist somewhere in King’s Landing. On the heels of Joffrey’s murder, Tyrion is quickly finding he has no allies (his father and sister are having him tried for murder) — except for dear Podrick, his highly competent, highly devoted squire.

Who They Are: Tyrion Lannister appreciates whores, booze, and biting wit; he’s a one of the noblest men in Westeros but still an outsider to his own family. Podrick Payne is his shy, sweet servant.

Why They Rule: In season three, Podrick saved Tyrion’s life on the battlefield, and Tyrion returned the favor by treating Podrick to three of the most talented prostitutes of King’s Landing. We then learned that Podrick had abilities even more impressive than loyal service and knowledge of sigils. In the seemingly unassuming Podrick, Tyrion found a true ally (who happens to be a lion on the battlefield and the bedroom — just ask those prostitutes); in Tyrion, Podrick found a teacher, a friend, and a supplier of hot ladies. Last night, Podrick was Tyrion’s sole prison visitor. He came bearing duck sausage, cheese, and seriously bleak news. The lesson here is simple: A real, enduring  friend is one who’ll help you smuggle sausage, one way or another. 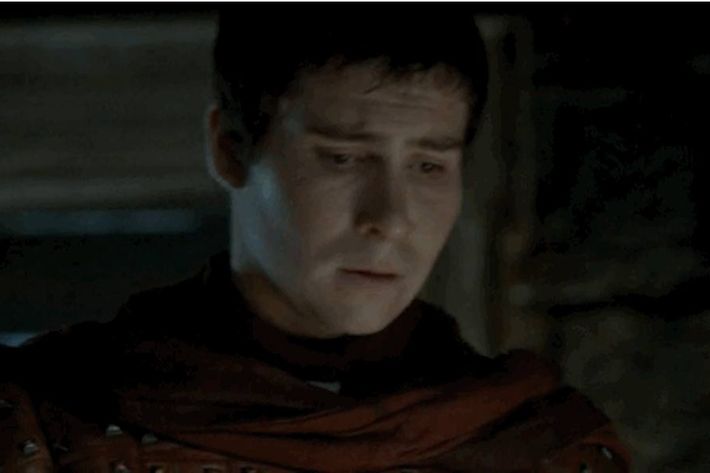 Best Couple Moment: Tyrion knows he’s in real danger; Podrick knows he will either have to betray Tyrion, flee, or be killed. They’ve come to the end of the road, and Tyrion refuses to let faithful Pod die on his behalf. As farewell, the two exchange a tearful, emotionally loaded look. I may have cried excessively.

Game of Thrones Couple of the Week: Episode 3

parties! Yesterday at 6:39 p.m.
Crying Into My Chanel Handkerchief at MoMA Guillermo del Toro was honored by the fashion house and art museum last night, and, yes, I cried.
parties Yesterday at 6:02 p.m.
All the Baddies on the Ice Luar’s Williamsburg holiday party brought only the finest furs, honey.
shopping Yesterday at 5:01 p.m.
10 Things You Don’t Have to Pay Full Price for This Weekend From winter essentials to luggage.
holiday gifts Yesterday at 3:30 p.m.
40 Last-Minute Gifts That’ll Arrive in Time for the Holidays Nothing fast shipping can’t solve.
friday sales Yesterday at 2:59 p.m.
24 Things on Sale You’ll Actually Want: From Birkenstock to Charlotte Tilbury Including a K-beauty gift set and a highly giftable record player.
parties! Yesterday at 1:48 p.m.
Cardi B, Katie Holmes, and More of the Bestest Party Pics This Week Celebrating with Chanel, Saks, Nordstrom, and more.
drama Yesterday at 12:00 p.m.
Why Is Everyone Suddenly Talking About Something Navy? After wild rumors about a divorce and embezzlement scandal, it turns out influencer Arielle Charnas’s lifestyle brand is simply not doing well.
ghislaine maxwell Yesterday at 10:34 a.m.
Would You Buy Ghislaine Maxwell’s Former Beach House? Proceeds from the seaside property will reportedly help fund her legal fees.
extremely online Yesterday at 10:00 a.m.
I Can’t Shut Up About ‘Goblin Mode’ It’s the perfect summation our post-pandemic selves: overwhelmed, underdressed, and depleted of all ability to act normal.
2022 fashion year in review Yesterday at 10:00 a.m.
It Was Julia Fox’s Year And Julia Fox’s year only.
power Yesterday at 8:16 a.m.
Brittney Griner Has Been Released From Russian Detention The WNBA star arrived back in the U.S. on Friday morning.
¡hola papi! Yesterday at 6:00 a.m.
‘Why Do I Always Have to Be the One to Initiate Plans?’ Most people are waiting for someone else to break through the quiet.
By J.P. Brammer
celebrity Dec. 8, 2022
Toni Collette and Dave Galafassi Split After ‘Substantial’ Separation The two were married for almost 20 years and share two children.
celebrity Dec. 8, 2022
Drew Barrymore Thinks Bad Dates Are ‘Awesome’ She may be the most optimistic single person on the planet.
keeping up with the royals Dec. 8, 2022
Of Course Harry and Meghan Have Matching Penguin Suits Our king and queen of corniness.
always shopping Dec. 8, 2022
16 Matching Sweatsuits You’ll Want to Live In All Winter Long Our favorites include ones you should especially wear outside of the house.
health Dec. 8, 2022
Celine Dion Diagnosed With Rare Neurological Disorder In a video posted to Instagram, the singer said she was suffering from stiff-person syndrome.
where did you get that? Dec. 8, 2022
Madison Utendahl on Nose Rings and Discounted Prada The entrepreneur shares her favorite NYC spots and her nightly routine.
grief Dec. 8, 2022
My Dad’s Jeep When my father died, I got his car. Eight years later, it’s falling apart. How am I supposed to say good-bye again?
By Katie C. Reilly
royals Dec. 8, 2022
Everything We Learned From Harry & Meghan Takeaways from their highly anticipated Netflix docuseries.
More Stories