As Patrick Stewart and Ian McKellen’s joint turn in Waiting for Godot on Broadway came to an end last week, the British thespians went on a PDA-heavy victory lap of New York City sights, documented on Twitter. Wearing their bowler-hat props, they struck intimate poses in front of landmark buildings and at the top of skyscrapers, clinging to each other on the Coney Island Wonder Wheel and walking down the boardwalk hand in hand. It was possibly the cutest social-media marketing campaign ever, and quickly all over the news media, too.

Of course, by then, Stewart and McKellen’s “adorable bromance” was already a burgeoning meme (Picard and Gandalf, holding hands!) covered by a BuzzFeed panel, during which the two played the Newlywed Game. That’s because — for all our talk of bros in this country — platonic-male PDA is still the rarest and most fraught of all social intimacy, which also makes it the most viral.

It wasn’t always this way. As sensitive-lad blogs like the Good Man Project have written, the homosocial love common in black-and-white photographs of men all but went extinct in the middle of the 20th century in America, when homosexuality changed from practice to pathologized identity. The shift meant sitting for a portrait in your best bro’s lap was verboten; more important, though, some have argued that it has led to a wide-scale deprivation in boys and men of intimate touch that is important to their development and mental health. Men who hold hands, sling an arm around each other, and say “I love you” risk being labeled gay at best and violent homophobic backlash (either from observers or their beloved bro) at worst. Yet I submit that they might also be rewarded by attracting straight women.

I first revealed my thing for lovey-dovey dudes to a friend as we pored over BuzzFeed’s “Which Two Members of One Direction Are Most Likely in a Gay Relationship?” — a conspiracy theorist’s compendium of GIFs comparing all permutations of the purportedly straight boy-band members touching each other. It was serving some murky, heterosexual purpose for us, too. 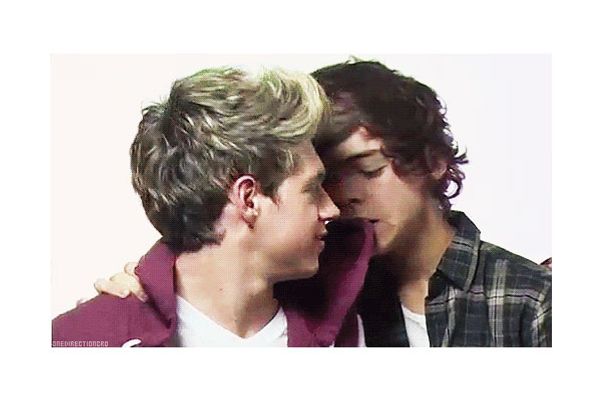 “I love them,” I declared. “They’re like puppies.” On- and offstage, the band members alternate between headlocks and head rubs, terrorizing each other with either surprise kisses or nips at their clothes. It’s not just a young mammalian thing, though it might be a British thing. Consider the twentysomething bloke-rock band Palma Violet’s “We Found Love”: The lyrics are about a “ladyfriend,” but the video’s all clean-shaven male cheeks, getting squeezed and smooched and smushed together in the pub. “Unrelated, I swear, but I’m always attracted to guys that are affectionate with their male friends,” my friend replied. “Haven’t ever totally unpacked that.”

Pressed to unpack it, she guesses that the straight woman’s love of bromance amounts to a variation of penis envy. Emerging from middle or high school with girl-clique PTSD, we yearned for the relatively uncomplicated group dynamics of our boyfriend’s friends, whose mutual affection appeared steady and manifested in piggyback rides and weirdly harmonious wrestling matches. She liked that her boyfriend (unlike, say, Paul Rudd in I Love You, Man) didn’t rely on her for 100 percent of his emotional needs. I probably liked that my high-school boyfriend and his friends were practicing this non-goal-oriented affection on one another, and not the other girls I considered my vague competition. There’s also the possibility that my love of affectionate bros is founded in basic sexual greed, no better than the male-oriented fantasies of naked-slumber-party pillow fights and Coors Light commercials about twins.

Either way, I missed bro love when I arrived on a college campus where hipster aloofness served as a default response to the crude enthusiasm and unwitting homoeroticism of the fraternities and their “mainstream” denizens. That is, until a group of transfer students arrived from a two-year men’s college located on a working ranch — one of whom I fell hard for in poetry class. He posited that Walt Whitman’s famously homoerotic “28 young men sousing each other with their spray” could actually just be about splashing around in a river with your buds, as he had done at his old school, and not in a gay way.

Bros — and the single-sex institutions that produce them — get a bad rap these days, and for good reason. The role of fraternities and athletic teams in propagating white-male supremacy and protecting rapists is measurable, and probably requires reform. (They have also left many a bro hopeless, style-wise, as Jezebel expertly delineated last week.) But let no one say that bros have done nothing good! Their capacity for unbridled man-on-man affection — a tired lean here, a cheek kiss there — flies in the face of homophobic gender norms and melts my cold, feminist heart.

Why I Love Guys Who Hug Other Guys