“I am a gay man now,” declared British diver Tom Daley yesterday. In a “Born This Way” era when many people see sexuality as determined at birth, the now had sort of a strange ring to it. Daley was drawing a distinction between his current identity and the one he described four months ago, when he announced he was in a relationship with a man but still fancied girls, too. At the time, Twitter erupted with charges that he was totally gay and just in the closet, and I wrote about how bisexuality is more socially acceptable for women than for men.

And so Andrew Sullivan, who’d been among the chorus expressing skepticism at Daley’s professed interest in women, was understandably triumphant at yesterday’s statement. Ta-da! Here’s the proof that Daley was never really bisexual! 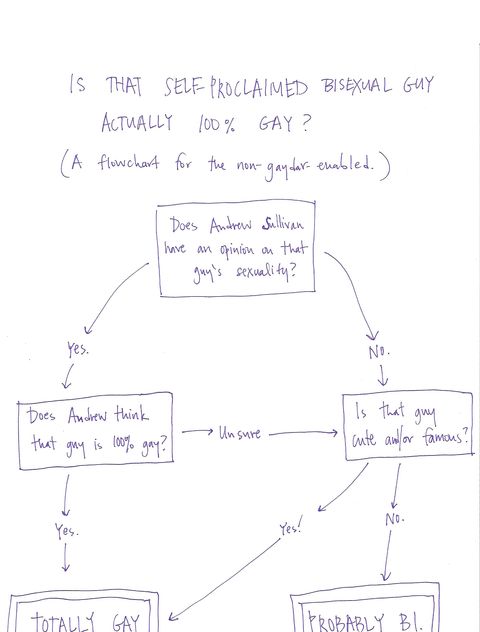 I’ll grant that it’s too soon to judge whether we’ve definitively entered a new era of male sexuality where being bi is more accepted. But I still think it’s damaging to leap to the conclusion that every guy who comes out as bi must actually be gay and looking for a way to “ease into” his real identity. Some men do identify as bisexual — and researchers have a hard enough time figuring out what percentage of the population is bi and what percentage is gay, let alone what percentage embraces one term while secretly identifying more strongly with another.

The public reaction to coming-out stories like Tom Daley’s is one way we signal to bisexual men — small percentage though they may be — whether their identities are acceptable. I don’t think coming-out pronouncements should be followed by a sexual-identity polygraph test administered by the media to figure out whether a person is actually bi or truly gay. I’m for letting people call themselves what they want to call themselves. Sullivan wrote at the time, “Daley will never have a sexual relationship with a woman again, because his assertion that he still fancies girls is a classic bridging mechanism to ease the transition to his real sexual identity.” I don’t doubt that many men have used bisexuality as a bridging technique as they come to fully inhabit their identities as gay men. But I also don’t presume to know what’s in Tom Daley’s head, then or now.

With all due respect to the power of gaydar (and its quaintness in the era of Grindr), I support Tom Daley calling himself bisexual, then calling himself gay, and I’d support him claiming an entirely different label another four months from now, if that’s what he’s comfortable with and identifies with most. If he says he’s bi, he’s bi to me. If he’s a gay man now and forever, that’s cool, too. Labels can help some people find community or clarity, but I don’t think they should be required — of Tom Daley or of anyone. And I certainly don’t think they should be permanently fixed.

After saying publicly that he now identifies as gay, Daley went on to emphasize that he stands by his decision to come out the way he did: using ambiguous language that avoided terms like bisexual and gay. “I was terrified,” he said. “I did not know what the reaction was going to be.” I know that I’d rather live in a world where people can honestly express their sexuality in the way that makes the most sense to them, without fearing a backlash. And I think the way to get there is to allow public figures like Daley to come out the way they want to, not to cry “gotcha!” if they change the terms.

Let People Coming Out Choose Their Own Labels