There were so many contenders for this week’s award. Brienne and Pod continue on their fun road trip, this week sharing kidney pie and eye-rolls. On the much darker end of the buddy spectrum, the Hound explained the heartbreaking origin of his burns and deep-seated dislike for most of humanity before letting Arya stitch up his wound. There’s a real hard-won bond between those two misfits.

But, listen, I’m only human. And humans, even if they’re icy blonde warrior queens who control dragons and free slaves, are not immune to a sexily gruff voice, five o’clock shadow, and floppy hair — as Daenerys revealed last night. So: For finally giving in to half a season’s worth of foreplay and bouquets of wildflowers, and for granting the audience a scene that was presumably so hot we didn’t even need to witness it (for those left unsatisfied, some fanfic), Daario and Daenerys are the king and queen of our hearts and libidos.

Who They Are: As the mother of dragons, war strategist, and freer of slaves, Daenerys has been so focused on her pursuit of the throne that she’s neglected to treat herself. Sexually. Enter Daario, her faithful solider who humbly confesses to having only two talents: war and women. Guess which one Daenerys was more interested in.

Why They Rule: It’s so refreshing to see a GOT woman using sex for her own indulgence. When Daenerys tells Daario to “take off your clothes,” it’s not a power play, not a move in her chess game — it’s simply for her own pure, lip-parting lust. Thank you, Daario, for obliging, and thank you HBO for the gift of shameless Michiel Huisman objectification. 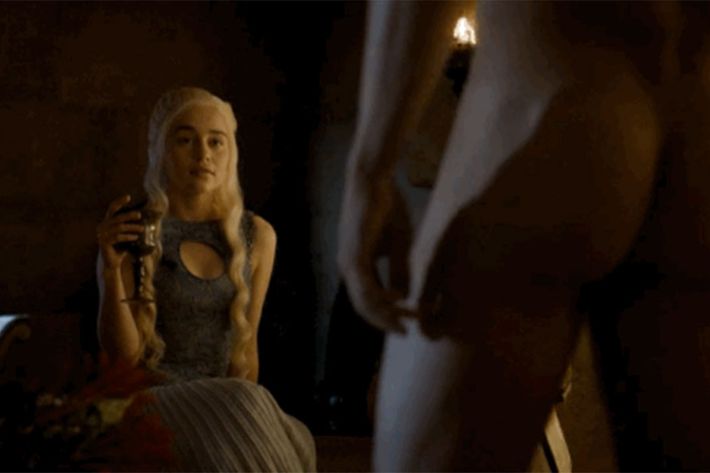 Game of Thrones Couple of the Week: Episode 7

rust Yesterday at 5:50 p.m.
Everything We Know About the Rust Shooting An FBI report concludes that the trigger must have been pulled.
sure why not Yesterday at 4:49 p.m.
Are Brad Pitt and Emily Ratajkowski Really Hanging Out? Rumor has it EmRata has “the vibes that Brad likes.”
soho grifter Yesterday at 4:34 p.m.
Anna Delvey Is Getting Out of Jail Having “demonstrated interest in pursuing legitimate employment in the United States,” a judge ruled.
pfw spring 2023 Yesterday at 4:26 p.m.
The T-shirt, Beloved by All, Gets a New Look By Miu Miu, nonetheless. Plus: Louis Vuitton shows a trove of great accessories.
By Cathy Horyn
what the what Yesterday at 4:16 p.m.
Carrie Is a Pigeon Lady Now Is that a real-life bird? No, it’s an $890 designer clutch.
celebrity Yesterday at 3:37 p.m.
What’s Going On With Harry and Meghan’s Netflix Docuseries? The Duke and Duchess of Sussex are reportedly at odds with the producers.
obsessive tester Yesterday at 3:00 p.m.
21 Self-tanners to Maintain Your Summer Glow Through Winter Natural and easy to apply.
power Yesterday at 2:51 p.m.
Iranian Forces Led Brutal Crackdowns Against University Protesters Despite forceful government intervention, women continue to take to the streets in defiance of government orders.
tv Yesterday at 2:32 p.m.
Excuse Me, Who Is This British Baking Show Hunk? Hellooo, Sandro!
what's the reference? Yesterday at 2:15 p.m.
An Early Aughts Staple Has Us in a Hold A personal shopper gives us tips on how to wear a camo miniskirt.
art and soul Yesterday at 1:50 p.m.
The Art of Motherhood In paintings, illustrations, and ceramics, artist Madeline Donahue captures the ecstasy and agony of being a mom.
By Amil Niazi
holiday gifts Yesterday at 1:31 p.m.
16 Gifts That Keep On Giving Whether they’re bandanas for abortion rights or cutting boards to feed the elderly.
power Yesterday at 1:01 p.m.
This Congressional Candidate Gave Birth On-camera “It’s important for folks to see how pregnancy and birth is a medical event that occurs in a hospital with doctors,” says Louisiana’s Katie Darling.
style Yesterday at 1:00 p.m.
Gigi Hadid Called Out Ye for ‘Bullying’ After His YZY Show Ye went after Vogue contributing editor Gabriella Karefa-Johnson on Instagram after she disapproved of his “White Lives Matter” shirt.
celebrity Yesterday at 12:51 p.m.
Angelina Jolie Claims Brad Pitt Choked One of Their Children Pitt’s rep called the allegations “completely untrue.”
pfw spring 2023 Oct. 4, 2022
A Comedy of Errors at Paris Fashion Week This has been an utterly ridiculous Paris season, in the best and worst sense. And it’s not over yet.
By Cathy Horyn
fashion Oct. 4, 2022
How Bella Hadid’s Spray-on Dress Was Made We were just as confused. So we found out.
power Oct. 4, 2022
‘Pro-Life’ Candidate Denies Report That He Paid for an Abortion Herschel Walker’s own son denounced him after an alleged ex-girlfriend told the Daily Beast that Walker had paid for her abortion.
always shopping Oct. 4, 2022
12 Best Pairs of Leggings for Running in the Winter We spoke with runners to round up the warmest leggings so you don’t have to.
blackpink Oct. 4, 2022
What’s Going on With BLACKPINK’s Leaked-Photo Drama? Everything to know about Jennie and V’s photo leak.
More Stories