In reality, the Carter-Knowleses didn’t need a bionic publicist to help them save face. They only needed Instagram.

As the news cycle speeds up and the public becomes increasingly jaded about traditional PR, Instagram has emerged as a go-to space for celebrities ranging from Beyoncé to Justin Bieber to Jill Abramson. There, they can winkingly acknowledge, toy with, apologize for, and dismiss rumors as quickly as the gossip starts. Modern celebrity relies on the illusion of intimacy, and Instagram PR is the ultimate tool for pseudo-intimate fan management: It emphasizes the celebrity’s direct connection with her fans (illusion) without forcing her to reveal any facts (reality). It feels more genuine than a press release, but still allows for meticulous image control. 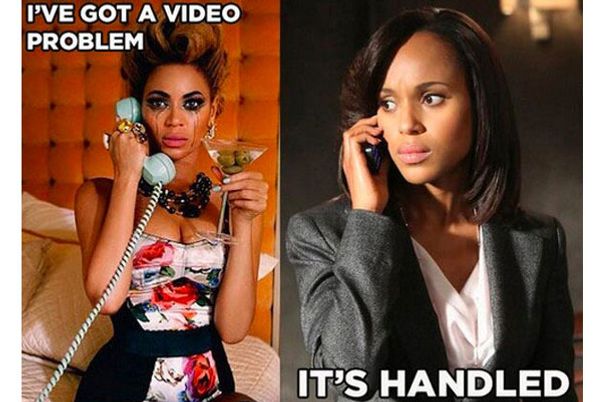 Let’s start with the Carter-Knowles fiasco. After TMZ posted the video, rumors about the cause of the fight flew across the internet. Initially, the Knowles sisters communicated with the public only through the coded language of Instagram: Solange deleted pictures of her sister from her Instagram feed, suggesting a rift between siblings. The next day, Beyoncé posted four happy sister pictures on her account, and Solange followed suit. Soon thereafter, a public statement that “Jay and Solange each assume their share of responsibility … and we have moved forward as a united family” confirmed the reconciliation. For transfixed fans who despaired at never knowing what happened in that elevator, the statement was blandly perfunctory. Instagram, however, provided a satisfying narrative arc. Regardless of how Beyoncé and Solange intended their actions (Passive-aggressive communication? Gestures of remorse? Machiavellian audience manipulation?), the actions allowed them to claim a share of the social-media capital they’d generated.

The clusterfuck of controversy surrounding Jill Abramson’s forced exit from the New York Times also showed how the sly ambiguity of Instagram PR can control a narrative better than corporate PR doublespeak. When initial reports cited Abramson’s “pushy” demeanor and introduction of lawyers to investigate concerns that she was being unfairly compensated compared to male peers, Times spokesperson Eileen Murphy fell into an argument that read like a philosophical causality problem: When Abramson lawyered up, “it was part of a pattern that caused frustration,” but “I NEVER said that it was part of a pattern that led to her firing.” As the Times’ own media reporters tried to sort out what all this meant, Abramson’s daughter Cornelia Griggs used Instagram to provide the battle’s enduring image: a picture of Jill posed in boxing gloves, captioned “Mom’s badass new hobby #girls #pushy,” which made the cover of the New York Post the next day. Good boss or bad boss, the tale of Abramson’s exit imbroglio was cemented as the sexist kneecapping of a woman who dared to “lean in.” (Griggs posted a comparison to Sheryl Sandberg on Instagram, too.)

In some ways, Griggs’s charm offensive was easier than the Times’ task, or even her mother’s. Since Griggs doesn’t need to discuss specifics, she can skip the exhausting task of splitting hairs about the who, what, when, and why of Abramson’s firing. Instead, she can rally good will and keep Team Jill’s momentum up without getting into specifics: “Big thank you to all the #pushy #bossy #polarizingwomen and men who get it. The story isn’t over, not even close,” Griggs wrote next to a screenshot of texts wishing “love to your mom.”

Even when a PR professional probably is involved, Instagram allows the celebrity to seem as though he is speaking directly to his fans. Take Justin Bieber’s latest micro-scandal and hasty apology: After a visit to a controversial Japanese war memorial drew outrage, Bieber apologized by posting a screengrab of a critical headline. The caption: “While in Japan I asked my driver to pull over for which I saw a beautiful shrine. I was mislead to think the Shrines were only a place of prayer. To anyone I have offended I am extremely sorry. I love you China and I love you Japan.” Though Bieber was likely alerted to the controversy and encouraged to apologize by someone in his entourage, executing it on Instagram in his own voice (typos and all!) made the appeal seem more genuine. The subtext: This apology is not a cynical attempt to appease critics in the press, but a direct appeal to “you,” fans in China and Japan.

Still, Instagram PR has its limits. Some messages are too transparently pandering to be effective, even through the Valencia filter. After Macklemore swept the Grammys, he texted the critically beloved Kendrick Lamar to apologize for the upset — then took a screenshot of the text and posted it to Instagram.

“You got robbed,” Macklemore wrote. “I wanted you to win. You should have. It’s weird and sucks that I robbed you.” But the image was such an obvious response to the anti-Macklemore backlash that it came across as “a transparent ploy to win himself plaudits for his graciousness,” Gawker’s Hamilton Nolan wrote in an article entitled “Macklemore Is a Ho Bag.” What’s more, the screenshot revealed that Macklemore has 1,133 unread text messages, a number so egregiously large that I can only conclude that Macklemore is terrible at using his phone, too. He may know his way around Instagram, but that man sucks at texting.

* Correction: This article initially said Solange deleted all pictures of her sister. In fact, she deleted all but one.