Supermodels are chameleons, known for their ability to shift into different looks and faces. But at the Greenwich Hotel recently, Christy Turlington displayed just two. On a wide screen in front of us, a beach-waved Turlington cavorts and makes out in the sand with her husband in the new remade ad for Calvin Klein Eternity. But the woman in front of me, in a classic Calvin Klein navy blue shift dress, looks like the prettiest, most elegant mom at the PTA meeting (who just so happened to make this year’s list of Time’s 100 Most Influential People). The Cut talked to Turlington, who has become a champion of a maternal health rights with the organization Every Mother Counts, about her morning and night beauty routine, the classic and remade Eternity ads, and her life as a part-time supermodel and full-time philanthropist.

How was the experience of shooting this new Eternity campaign different from the one you shot in 1995?
[In 1995], I wasn’t a mother. And [this time] I’m with my husband [Ed Burns], which is different, since we’ve never really worked together before. It’s also the first time doing Eternity with Inez and Vinoodh. But it’s like a family even though a lot of the people are different. This concept of Eternity also isn’t a “concept.” Inez and Vinoodh are unique in that they are a couple and people who have been together a long time. Eddie and I are a couple and have been together for fourteen years. It’s not a role that we’re playing; we’re playing ourselves. Eternity is what it is. It’s forever. It’s a continuum. It’s going the distance. It’s commitment. It’s all the things that originally were the inspiration to begin with.

Your husband is an actor and a director. Did you give him any modeling tips?
[Laughs.] Every actor is a model to a certain extent, since they have to do so much press. But we were joking that he was just like, “I just follow your lead.” I work so well with Inez and Vinoodh; I know what they want. It’s just an unspoken thing. It’s funny for him to be the outlier and to be like, “What do I do now?” But he did great.

How was it rolling around in the sand?
[Laughs.] Oh, we do that all the time.

Just a normal Saturday afternoon for you guys.
[Laughs.] We barely go anywhere without our children and they were with us, too, just not on the set. They were on vacation. [Turks and Caicos] is such a beautiful place and we go there frequently as a family. To have to work and roll around in the sand with your husband, not bad.

What was your first scent memory?
For some reason, I can very vividly recall loving violets. I don’t know if I have a sensory smell of it, but I loved the flower. It was my favorite; I used to have a plant and my mom got me an African violet. It was also my favorite color at the time. And then later, when I started to travel, I was in London and discovered a violet Penhaligon’s fragrance. It reminds me of being a little girl. It’s not a sophisticated scent at all, but that was probably my first.

What is your morning and nighttime beauty routine like?
It’s pretty basic. I started my day getting ready with hair and makeup in my house, which doesn’t really happen normally. When I opened the door to my kids, I was like, “Bear with me.” Two dogs barking, kids scrambling. As a family, we tend to sleep as long as we possibly can and then a mad dash out of the door to go to school. So I wash my face and put a little bit of cream on. And then after I drop my kids off, I’ll go for a yoga class or a run.

After my kids go to sleep, I wash my face and put on a little bit of moisturizer. I’m more into skin care in the sense that I like smells and things that feel nice. But depending — if I’m getting dressed up or working, then I enjoy makeup like every other girl. I’m not an everyday fragrance person usually. I wouldn’t put fragrance on before dropping off my kids or going to the gym. It’s an uplifting thing I do for myself.

What moisturizer are you using?
Well, I get exposed to so much. I love that Rodin oil; it’s great for your skin and hair. Everything I have is kind of dry. I work for Imedeen, so since June, I’ve been taking those [supplements] in the morning. But then I put on lots of oils. Any kind of essential oils. I’m an oil fiend. There’s a company that makes essential oils that I’ve been using for years and years. You have to get them through doctors. I like those but don’t use them on my face so much. Then I use a Rodin or Vitamin E or almond oil. I love the smells of things that are more earthy.

As a champion for maternal health rights with your organization, Every Mother Counts (EMC), how do you feel about the concept of Leaning In?
I’m for it. I’ve not worked or grown up in a corporate setting, but I have worked closely around women in leadership positions. I understand the importance of mentoring and encouraging other women to speak out and use their voice. But I hate when the media takes over things and people are so critical of Lean In in some cases. They love and then they don’t love it. Then there’s the anti–Lean In. I feel like, it’s all good. What’s important is that we keep dialogues going. There should be more men reading those kinds of books and that’s obviously not happening. Some men have a hard time speaking up, too.

Hillary [Clinton] is famous for saying human rights are women’s rights and women’s rights are human rights. That’s a given. A lot of men would never even consider that or how that might not be equal, especially in this country. I have a son and a daughter; I try to teach them equally about balance, gender, and gender equity. As far as some countries and people have advanced, I don’t think we’ve arrived there until everyone has those qualities.

What are the greatest challenges today facing maternal health?
Well, education and access. There’s still not a lot of girls and women having access to reproductive health education, early on. It’s something lacking and it’s a political thing. In terms of budget, maternal and child health are at the bottom of the barrel. We could do a lot to make that a bit higher and not the last thing we think about.

Why do you think it is at the bottom of the barrel?
I can only say what I see. I think in part, the reason why there has been this extreme flip of power is because women are considered to have so much power in their capacity to give birth. That is very threatening for a lot of other human beings. There have been phases of more or less consideration of that power. That and the sometimes ignorance on the part of the other sex in that it does take both sides and would improve the lives of most people, if there was equality. That’s an education challenge.

You’ve said before that you feel like there’s a sense of duality in every woman. Do you still feel that sense of duality in your life as a model and in your work for EMC?
I wouldn’t say there is really duality there — I model so infrequently. When I do, it’s usually with companies like this that are supportive of EMC. One enhances what I can do with the other. My day-to-day life changes; I don’t have any standard day. I’m mostly in my office working on EMC. There’s the random photo shoot, that’s not normal, for me, even if it’s my husband. It’s a tenth of my existence.

I don’t even consider it duality at this point. I’ve grown up being a model. I see what I do now as an extension as a human being who has evolved and everything in my world evolves with me. The way I look at them, I still have such a short attention span for [modeling]. I’d still rather be organizing my strategy for the next year. That’s what I need to do, that’s the most important thing, but I’ll get to that tomorrow. 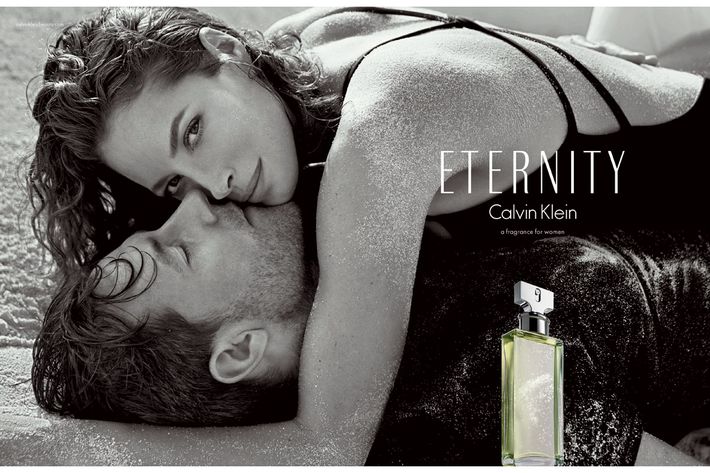 Should Women in Their Forties Model Underwear?

obits 3:04 p.m.
Anne Heche Has Died at 53 The actor suffered severe injuries after a car crash in L.A. earlier this month.
fashion 3:00 p.m.
Julia Fox Is Back! And she is giving us the latex looks we’ve been so thirsty for.
feminism 2:05 p.m.
Who Actually Lost the Sex Wars? And were there any winners? A conversation with Christine Emba, Nona Willis-Aronowitz, and Lorna Bracewell.
friday sales 1:49 p.m.
19 Things on Sale You’ll Actually Want to Buy: From Ninja to Isabel Marant Including the most effective foot peel and some Chuck 70’s for just $35.
i'd buy that 1:37 p.m.
Drop Everything, Joan Didion’s Estate Sale Is Coming How much would you pay for a mohair throw that once graced her couch?
do i need this? 1:28 p.m.
Do I Need Lori Harvey’s Gym Outfit? I couldn’t get with Pilates, but this I can do.
breakups 12:35 p.m.
Michelle Branch Announces Her Separation From Black Keys’ Patrick Carney Branch was arrested for misdemeanor domestic assault shortly after the announcement.
selling sunset 11:35 a.m.
Looks Like Jason Oppenheim Has Also Moved On Surprise: His new girlfriend isn’t an O Group agent.
celebrity 11:15 a.m.
Kim Kardashian Bravely Takes Shot On-Camera Behold, the face of someone who’s made a huge mistake.
extremely online 11:09 a.m.
I Can’t Shut Up About This Photo of Austin Butler’s Girlfriends Vanessa Hudgens and Kaia Gerber met each other long before they both dated Butler.
5 questions with... 11:09 a.m.
Chanté Adams Is Redefining A League of Their Own The star hits a home run in Prime Video’s new series.
parties! 10:46 a.m.
Beyoncé, Remi Bader, and More of the Bestest Party Pics This Week Celebrating the release of Renaissance, the launch of the Remi x Revolve collab, and more.
seeing someone 8:00 a.m.
Help! Both Women I’m Seeing Want to Be Instagram Official You don’t have to “launch” a relationship if you don’t want to.
By Randa Sakallah
style Yesterday at 7:01 p.m.
Hey Fashion Friend: How Do I Wear Fashion Cargo Pants? We provide you with 15 non-ironic pairs to go with your tiny shirts.
anne heche Yesterday at 5:05 p.m.
Anne Heche in a Coma, Under DUI Investigation, Following Car Crash According to a representative, she has remained in a coma since shortly after the accident.
ugh why Yesterday at 4:16 p.m.
Britney’s Lawyer Has Some Words for Kevin Federline “Britney Spears is a brilliantly talented, extremely hardworking icon … The same, unfortunately, cannot be said about Mr. Federline.”
sigh Yesterday at 4:00 p.m.
Male Actor Doesn’t See the Point of Intimacy Coordinators Emma Thompson and Kumail Nanjiani disagree.
5 questions with... Yesterday at 3:27 p.m.
Gugu Mbatha-Raw Takes on the Neo-Noir In Surface, she plays an amnesiac trying to uncover her truth.
wtf Yesterday at 2:42 p.m.
Watch Kathy Hilton Learn Lizzo Is Not Gabourey Sidibe It’s as cringe as it sounds.
panties we love Yesterday at 1:00 p.m.
Kim Kardashian on How She Made Her Skims Underwear A deep dive with Kardashian on what makes Skims panties so special. (Hint: It’s the fit.)
More Stories