When I first heard about ThirdLove — a lingerie app that uses selfies to determine your “real” bra size — last fall, I was pretty skeptical. I should be clear that I am not someone who takes bra sizing very seriously. I’m positive I’m among the “85 percent of women wearing the wrong bra size”; I don’t even think I’ve ever been fitted. After spending most of high school with a fraudulent-seeming air gap between bra and boob, I upgraded to conveniently trendy bralets in college — essentially glorified training bras in handy small, medium, or large sizes, presumably intended to provide nipple coverage for professional settings.

So, I was cautiously optimistic the first time I opened the ThirdLove app, which is easy and quick to use: You stand, tank-top clad, in front of a mirror and take two selfies, one head-on and one from the side. Using the size of your iPhone as a rubric, the app calculates your measurements instantly, and gives you a ThirdLove size, which looks similar to industry sizing, but claims to be more precise. In addition to traditional cup sizes, they offer half-sizes between A, B, and C cups, as well as sizing up to an E cup (they plan to add F and G sizes this summer). You can then shop their selection of correspondingly sized bras, which range from $40 to $75.

Though I’m not convinced the resulting bras have any effect on the appearance of my waist or posture, there’s no question that they fit better than any I have bought before. My life was not changed, but I was impressed: The shopping experience was painless, and I would both use the app again and recommend it to my mother and sister. I talked to ThirdLove co-founder Heidi Zak and designer Ra’el Cohen about bra shopping and why it’s so difficult to find one that fits.

Where did the idea for ThirdLove come from?
Zak: For me, it was really just the dread and frustrating experience of having to go bra shopping. I kept putting it off and putting it off, and I said, There’s got to be a better way to get fit for a bra, to shop for a bra, and also, to get a bra that’s of good quality and beautiful that isn’t crazy expensive. Women should get a really high-quality bra if they’re paying $50 to $70.

The idea for innovations in sizing technology was part of the business model from the very beginning, because really what it boils down to is fit. And I think more broadly, even outside of the lingerie industry, the issue with e-commerce is generally around fit. That’s why you see initial return rates from online shopping are 40 to 50 percent, because people are buying two to three sizes — because, you know, you don’t know what size you are, so you order a bunch, and then you have to send them back. It’s a cumbersome process.

I would usually go into a department store and get fit. I hadn’t done a lot of measuring myself at home, because I was always afraid I was going to mess up — and now that I’ve used a measuring tape a lot I know that it’s actually really hard to measure another human being, let alone yourself. Using the mobile phone as a platform for both fitting and shopping for lingerie is completely unique — we’re leveraging the mobile phone to create a better fitting and shopping process than customers can get going into a store. 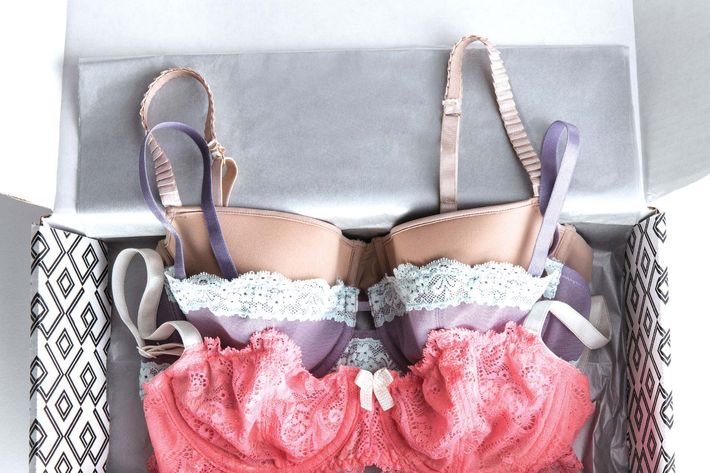 Is sizing bras difficult simply because industry sizes aren’t always consistent?
Cohen: Yeah, there’s no standardized sizing in the U.S. Brands decide, This is what our lady looks like, and we’re going to make all the clothes to fit her and people of her similar body shape. That’s why a certain brand will fit you better, whereas another brand won’t fit you well. Most brands create sizing that they think their customer will wear, whereas we set out to design not for a certain type of woman but to actually create more sizes to fit more women and more body shapes. So, we have half-cup sizes. In analyzing a lot of other bra companies and looking at their sizing, we noticed that between an A and B and a C and D cup there was such a huge jump. We did focus groups with hundreds of women and realized that there were all these women falling between these sizes.
Zak: And we’re finding, as you would imagine, that 50 to 60 percent of women are falling into the half-sizes, so that’s pretty exciting.

Why has it taken so long for additional sizes to exist? That seems so simple.
Zak: There are a few reasons. One is that, as a brand, it’s expensive. The more sizes you carry, the more it costs — that’s just a simple equation. And then, a lot of brands are constrained by actual physical space for inventory. When you’re talking about an actual brick-and-mortar store, or a department store, there’s only a certain amount of storage, there’s only a certain amount of floor space, and if you’re talking about adding cup sizes — that’s a lot of sizes. It doesn’t necessarily make sense for other companies to do it.

What’s the deal with cross-grading — how brands will sometimes tell you that a 32C is the same cup size as a 34B?
Cohen: It’s a problem, because it’s just really confusing. I don’t know if you know, but if you’re a 34B, that doesn’t mean that you’re 34 inches around. It actually means that you’re 30 to 31 inches around. In the industry you add three or four inches to your under-bust measurement — it’s just very confusing. And so then, if you’re a 34B and you want your band to be bigger, you would think, Oh, I’m a 36B — but you’re not. You’re actually a 36A.

You can see where I’m going with this. It’s very, very confusing. So, what we set out to do was use the app to get the actual under-bust and over-bust measurements — and if you’re a B cup, you’re a B cup no matter what your band size is. We want our sizing to be as transparent as possible, which is different from the industry, but, you know, this can be easier.

Do you believe those statistics, mostly touted, it seems, by lingerie companies, that 85 percent of women are wearing the wrong bra size?
Zak: Well, from experience, I’d say, yeah. Well, maybe it’s not 80; maybe it’s 70, but it’s definitely over 50, because we’ve done a ton of testing. Every time someone uses the app, we first ask them, What do you think your bra size is? And yes, most of the time women were wearing the wrong bra size.

Does it matter? What are the benefits of wearing the right bra size?
Cohen: Basically, the more supportive the bra is and the more that your breasts are held up, the smaller your waist is going to look — especially if you’re larger-chested, you’re nipping in the waist, you’re getting a nice smooth line because you’re not having the bra pull-down. So, when you’re well supported, you’re getting a really great shape. Your posture improves, if your straps fit correctly and if your band fits correctly.

What we’ve actually found is that many women are wearing a band that’s too big and a cup that’s too small. What happens over time is that your bra stretches out, and once you lose the support of the band, that’s really where the support of the bra comes from. So when you’re buying a bra you should always be wearing it on the very loosest hooks, so that as the bra stretches you can tighten it. When you buy a bra in a store, you’ve been wearing your old bra for a year and it’s probably kind of stretched out, so you put on the new one and think, Oh my gosh, this is too tight, but it actually probably isn’t.