On last night’s very special episode of The Bachelorette, the gang went to lovely Marseilles, the city south of the City of Love, where they visited a food market and a scary mime studio. But that’s not all: ABC also thought this was the perfect chance to enter into a conversation about race. So while some guys made out, some guys learned to mime, and Andi learned to cook frog legs and overcome her PJPSD (Post Juan Pablo Stress Disorder), the rest of us were obliged to grapple with the underlying racism that has been a problem throughout the whole franchise. Was anyone surprised that the conversation was so unsuccessful in this context?

But first, the dates.

Josh the Jock gets the first solo date of the night: grabbing sandwiches and taking a boat tour of Marseille. Neither Josh or Andi spoke French very well, so they strolled around screaming Merci! Merci! to the sky as if the heavens would give them more baguettes. Fortunately, they are fluent in make-out, so they proceeded to molest each other while missing all of the sights Marseille had to offer. Brian, on the other hand, was a dud on his culinary themed one-on-one date — so much so that Andi up a flaccid asparagus to illustrate both the death of her lady boner for him and his manhood in general. The other nine got to go to mime school! They wore stripes — but didn’t paint their faces because asking Marquel to go whiteface for love would have crossed so many lines — and humiliated themselves by performing for strangers who immediately hated them.  As JJ put it, “Am I an amazing mime person? No.” Truth. 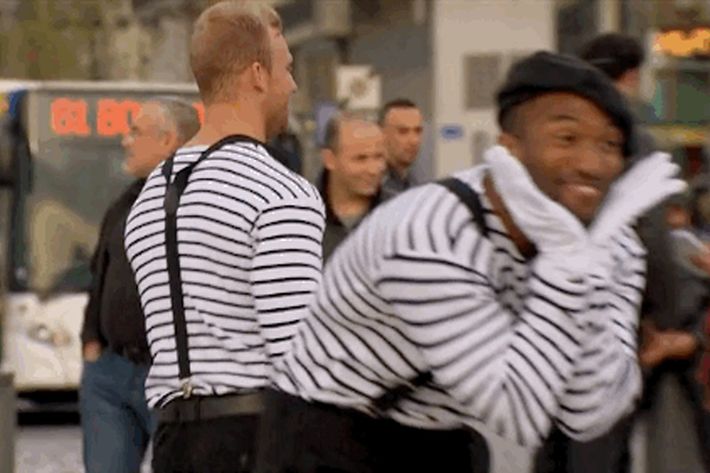 Meanwhile, back at the Men Den, things were getting heated.  JJ the Panstrepreneur decided to be a “good friend” and tell Marquel that Andrew had called him a “blackie.” I didn’t know this was a commonly used slur; regardless, he was rightfully upset. Generally when a Bach contestant gets this much screen time, it foreshadows their departure. Marquel has been a standout character, but last night he got more than one monologue, including a tearful one where he explained how frustrating it was to not be seen as a “good guy” or a guy who was raised well, but rather as  “the black guy” first and foremost.

In the past few years, ABC has come under criticism for a lack of diversity on The Bachelor. Every time there is a black contestant, especially one that makes it past the first few episodes, it feels like ABC is gesturing wildly like See! We have a black friend! Even if his season, the show gave Marquel this moment to say, “I’m not your token, I’m a real person” but then treated him like one anyway. It wasn’t really helpful, just some awkward meta-moment made all the more uncomfortable when he didn’t get a rose, and his exit from the show felt totally unexplained and abrupt. I can’t really suggest a fix, but it was an unfortunate ending to ABC’s kind of hackneyed first attempt at acknowledging race.

Given all the tension, Andi decided to skip the standard cocktail party before the  rose ceremony. She was mad, so selected a strapless, corseted gown and did her hair in a crazy sidebraid— proving that grown women also emulate Elsa from Frozen, and also suggesting that she is ice cold and will axe any troublemakers. She did so by kicking off Marquel in a group that included Patrick, the boring guy and Andrew the maybe-racist. 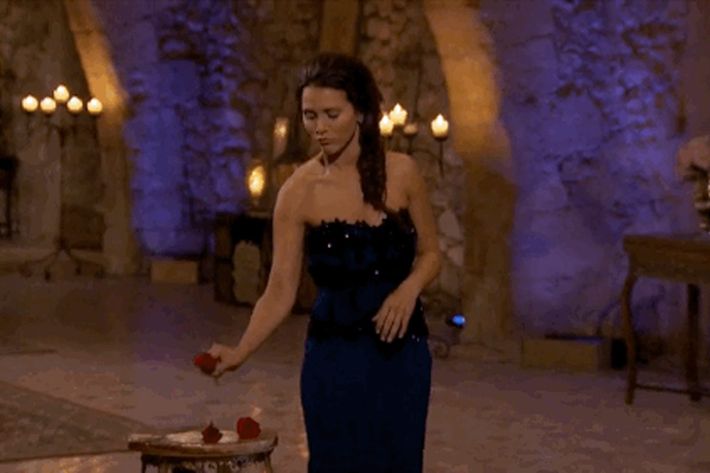 Farewell Marquel, sensitive, self-aware, Marquel. We will miss your bold pattern mixing and commitment to the performing arts. Also your abs.

The Bachelorette Tried to Have the ‘Race’ Talk

sober questioning 12:00 p.m.
Ask Ana Marie Cox (Almost) Every Question You’ve Ever Had About Sobriety The Cut’s new biweekly column is talking drinking, not drinking, and everything in between.
no please 11:30 a.m.
I Refuse to Know Any More About This Monkey The celebs are trying to make me care about their latest NFT trend. I won’t let them.
spider-couple 9:45 a.m.
A Brief History of Zendaya and Tom Holland Flirting Publicly They’ve reached the “walking with coffee mugs” stage.
hmm 9:39 a.m.
Marc Jacobs Shoppers Scored Free Bags. So They Thought. A website glitch made bags 100 percent off.
now smell this 8:00 a.m.
Thierry Mugler Changed the Perfume World Forever With his perfume Angel.
By Kathleen Hou
power Yesterday at 4:44 p.m.
The Lives They Want You to Forget Anti-choice activists try to erase the patients who need — and benefit from — abortions.
anti-vaxx Yesterday at 2:26 p.m.
Cheryl Hines Condemns Husband RFK Jr.’s Comments About the Holocaust Robert F. Kennedy Jr. brought up Anne Frank during a recent anti-vaxx rally.
couture fashion week Yesterday at 2:18 p.m.
At Couture, Embracing Hard Chic What Daniel Roseberry’s Schiaparelli collection, Maria Grazia Chiuri’s Dior, and Virginie Viard’s Chanel had in common was precision.
By Cathy Horyn
racism Yesterday at 1:41 p.m.
Bravo Fires Jennie Nguyen from The Real Housewives of Salt Lake City “We recognize we failed to take appropriate action once her offensive social media posts were brought to our attention.”
recap Yesterday at 12:29 p.m.
A Bachelor Villain and Her Garlic-Butter Shrimp Shanae takes food fights to the next level.
celebrity Yesterday at 12:07 p.m.
Pop Quiz: Do You Know Who This Man Is? Wheel of Fortune host Pat Sajak recently confessed that he had no idea.
ask a boss Yesterday at 12:00 p.m.
‘I Hate My New Job. Can I Quit Yet?’ Before you make any moves, have a straightforward conversation with your boss.
health Yesterday at 11:00 a.m.
Is the Pain All in My Head? A new treatment called pain-reprocessing therapy promises to cure chronic pain — but maybe not for everyone.
By Eleanor Cummins
celebrity Yesterday at 10:41 a.m.
John Mulaney Has Perfected the Dad Selfie And he posted a picture of Olivia Munn for the first time.
let's makeup Yesterday at 10:35 a.m.
Is Kanye West Doing Makeup Now? He’s partially responsible for at least one of these looks.
By Erica Smith
power Jan. 24, 2022
Evan Rachel Wood Says Marilyn Manson ‘Essentially Raped’ Her On Set In her new documentary, she said Manson penetrated her while filming a 2007 music video.
culture Jan. 24, 2022
And Just Like That … We’re Being Threatened With a Season Two Sources say those involved are “feeling good” about a possible return.
fashion Jan. 24, 2022
Thierry Mugler, Fashion’s Greatest Showman The designer, who died Sunday, was force in ‘80s fashion. A new wave of celebrity fans and a museum retrospective have brought his influence back.
By Matthew Schneier
in memoriam Jan. 24, 2022
13 Out of This World Thierry Mugler Looks From inventive silhouettes to theatrical productions, Mugler’s unique approach to glamour will be celebrated forever.
sorry to this man Jan. 24, 2022
Doubt Taylor Swift’s Songwriting at Your Own Peril One cannot simply insult her skills.
More Stories