Last night’s battle for the Wall was really just a vehicle for the showdown between star-crossed lovers Jon Snow and Ygritte. Oh, Ygritte: betrayed by her crow, she’s spent this season trying to patch up a broken heart by killing and pillaging her way to the Wall. But what would happen when she got there? A tender reunion? Total slaughter? All of the above! For their all-too-brief yet still emotionally gutting battlefield reunion, Game of Thrones Couple of the Week goes to Jon and Ygritte.

Why They Rule: Jon Snow, Ned Stark’s bastard, fell in love with a red-headed Wilding, Ygritte, while embedded with the enemy during Season 3. Ygritte, a fierce yet vulnerable warrior, taught Jon the ways of the world beyond the Wall. She also taught him about sexytime in caves. (Still one of the sweetest scenes in GOT history.)

Why They Rule: They are the Romeo and Juliet of Game of Thrones: two kids from opposite sides of the Wall, who just want to be together.  He broke his celibacy oath for her, and she didn’t kill him, which is pretty much all you can ask for in this world. Every sharp arrow she loads into that bow is meant for Jon Snow —  but here’s hoping the one aimed at his heart is actually Cupid’s. 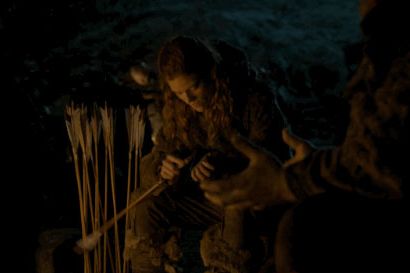 Best Couple Moment: When the two finally locked eyes on the battlefield and you saw so many tortured emotions in Ygritte’s eyes and cheek twitch — relief, joy, pain, murderous rage, etc. I wanted to punch Ollie in the face for killing her right when Jon gave her that big smile and it seemed like she might lay down her weapon and run into his arms. At least she got to see those bouncy curls one last time. 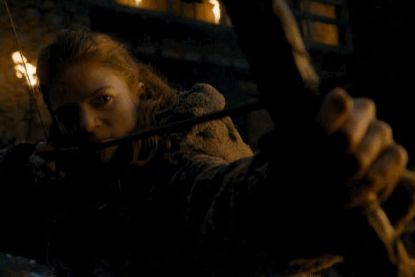 Game of Thrones Couple of the Week: Episode 10

hairy situations 24 mins ago
Wait, So Now Even My Hair Is Aging? Ugh.
By Parizaad Khan Sethi and Shanna Shipin
tyre nichols 3:16 p.m.
A Sixth Officer Has Been Suspended After Tyre Nichols’s Death: Updates The officer was relieved of duty the same day the five officers charged with murder were fired for the beating.
documentaries 1:31 p.m.
‘For So Long, I Had Larry in My Ear’ In an exclusive clip from Hulu’s Stolen Youth docuseries, Larry Ray survivor Felicia Rosario opens up about the impact of his gaslighting.
keeping up with the royals 12:37 p.m.
Could the Spice Girls Get Harry to the Coronation? Sources are saying the palace is “super keen” to get “Britain’s biggest girl band” involved.
sparking joy 11:00 a.m.
Marie Kondo Has ‘Kind of Given Up’ on Being Neat Validation for messy homes everywhere.
transgender rights 10:59 a.m.
Utah Bans Gender-Affirming Care for Trans Youth Already this year, Republican lawmakers have proposed more than 150 bills limiting the rights of trans people.
spring fashion 8:00 a.m.
The Promise of Pyer Moss Kerby Jean-Raymond was one of fashion’s most celebrated young designers. Then what happened?
By Tahirah Hairston
spring fashion 8:00 a.m.
It’s Glo Time Grammy nominee GloRilla is figuring out how to be famous while staying F-R-E-E.
By Tirhakah Love
spring fashion 8:00 a.m.
The Hustle of Women in Hip-Hop Editor-in-chief Lindsay Peoples on launching the celebration of 50 years of women in hip-hop who’ve changed the game.
By Lindsay Peoples
how i get it done 7:00 a.m.
How Political Commentator Molly Jong-Fast Gets It Done “We’re a pretty sedentary bunch, but we do a lot of dog-walking. Also, I try to visit my mom once or twice a week depending on how guilty I feel.”
sex diaries Yesterday at 8:00 p.m.
The Creative Director Getting a Little Tired of Feeld This week’s sex diary.
snl Yesterday at 3:48 p.m.
Michael B. Jordan Is a Different Kind of Jake From State Farm See him rock the red polo and khakis on SNL.
celebrity couples Yesterday at 12:28 p.m.
This Good Morning America Romance Keeps Getting Messier Amy Robach and T.J. Holmes are out at ABC.
astrology Yesterday at 8:30 a.m.
Madame Clairevoyant: Horoscopes for the Week of January 30 The overarching astrological story right now is one of growth, action, and following through on intentions.
By Claire Comstock-Gay
spring fashion Jan. 27, 2023
12 Ways of Looking at André Leon Talley The friendships and love stories found inside his estate auction, as told by Anna Wintour, Marc Jacobs, and Tom Ford, and more.
By Cathy Horyn
wait what is happening on tiktok? Jan. 27, 2023
Everything We Know About TikTok’s Lashgate Drama Did Mikayla Nogueira add false lashes or not?
parties! Jan. 27, 2023
Teyana Taylor, Anna Camp, and More of the Bestest Party Pics This Week Parties with Gucci, Sundance, and more.
gone sale-ing Jan. 27, 2023
10 Things You Don’t Have to Pay Full Price for This Week Deals from Dyson, Nordstrom, Shopbop, and more.
friday sales Jan. 27, 2023
19 Things on Sale You’ll Actually Want to Buy: From Lunya to Areaware Including fuzzy Birkenstock clogs, a teensy Cricut heat press, and our favorite weekender bag from Patagonia.
recommendations Jan. 27, 2023
20 Best Butt Plugs You Can Buy Online According to experts.
More Stories