Though we are all still haunted by — spoilers all over this thing, obviously — the truly horrifying sounds of Oberyn Martell’s head being popped like a pimple, we must continue with the proceedings. R.I.P., Oberyn, you sexy man. We’ll miss your surprisingly effective dance-fighting.

As poor Tyrion is officially condemned to death for murder, his fugitive wife is faring pretty well in the Eyrie. After shoving Lysa through the moon door (not mad at you, Littlefinger) Petyr “Littlefinger” Baelish has his back against the wall — which provides an opportunity for Sansa to gain the upper hand. In a surprising display of cunning, Sansa delivers a teary lie that confirms her aunt’s suicide — and saves both their lives. So for finally getting her head in the damn game, this week’s reigning couple is Sansa and her creepy father figure/teacher/possible (shudder) lover, Littlefinger.

Who They Are: Portrayed early on as helpless (relative to Arya), Sansa has never been a threatening figure. She has been abused, pushed around, pawned off, and occasionally pitied. Littlefinger, on the other hand, is Westeros’s version of Anonymous: hiding in the shadows, constantly playing puppet-master. He has also spent most of his life pining for Catelyn Stark, and “heroically” bailed out her daughter from King’s Landing.

Why They Rule: It’s unclear if the Sansa/Littlefinger relationship will stay father/mentor or turn into something else that nobody wants. But it’s obvious that his fixation with her, and her mother, is edging into some pretty dodgy territory. Does she choose to protect him because of Stockholm syndrome or self-preservation?  Either way, Sansa — who has been at the mercy of others for so many seasons — had to make a decision in last night’s episode: life with Littlefinger or the unknown? With so few options, she hedges here and goes with the former. In doing so, she reveals that she’s cunning enough to capitalize on Littlefinger’s unrequited feelings for her mother. She tells him, “I know what you want,” and much to Littlefinger’s dismay (and ours) she totally does. Sansa finally gains the upper hand. Hopefully she can keep it.

Best Couple Moment: A new, and more interesting, Sansa emerges as some kind of smoking-hot Black Swan Ice Queen, and presents herself to Littlefinger like they are about to go to prom, but so much darker. 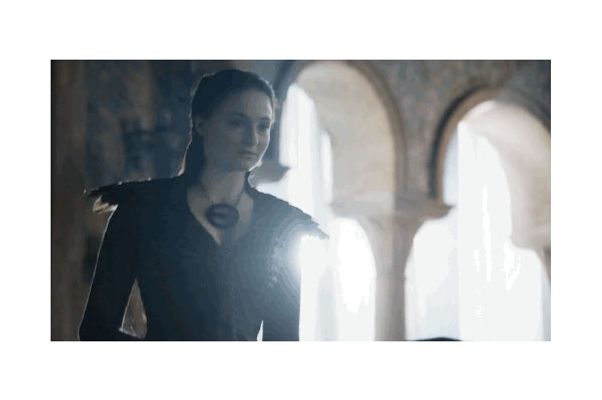 Game of Thrones Couple of the Week: Episode 8