When Michael Angelo of Wonderland Beauty Parlor and I talked about inspiration for this series of GIFs, we were both immediately drawn to the same iconic image of Claudia Schiffer. “It’s that one of her with a ribbon — ,” I started. “And it has the teased ponytail!” he finished. It’s an iconic image of Schiffer with a bouffant pony — reminiscent, too, of Brigitte Bardot — secured with a coquettish ribbon. In this week’s hair tutorial, Angelo modified the look slightly with a bun to make it more of a special-occasion style. Angelo and model Britt Bergmeister show us, in a few easy GIF steps below, how to create the look.

Step 1: Prep the hair with a liberal spray of Oribe’s Dry Texturizing Spray to give the hair some grip and texture.

Step 2: To give the front of the bun some slight volume, Angelo back-teases the hair slightly using a rat-tail comb. Do not back comb more than three times, as we only need a slight bit of volume in the front to balance out the bun.

Step 3: Gather the hair into a pony to secure it. Angelo prefers using bungee cords, because they hold the hair (no limp pony!) without causing damage. Make sure the pony is at the crown in the back of the head.

Step 4: Angelo wants to create a full bun, so he uses a mushroom-fluffing technique. He twists the pony and, starting at the base, fluffs it using his hands. Yes, it sort of looks like he’s milking her hair.

Step 5: He then takes the full hair from Step 4 (note that he does not twist the pony) and creates a bun around the base of the elastic. He secures it with bobby pins.

Step 6: Using a wide black one, Angelo ties the ribbon around the elastic. With the bow facing the base of the bun, he cuts the ends at a slant using scissors.

Step 7: He sprays the bun with a final dose of Oribe Superfine Strong Hair Spray. 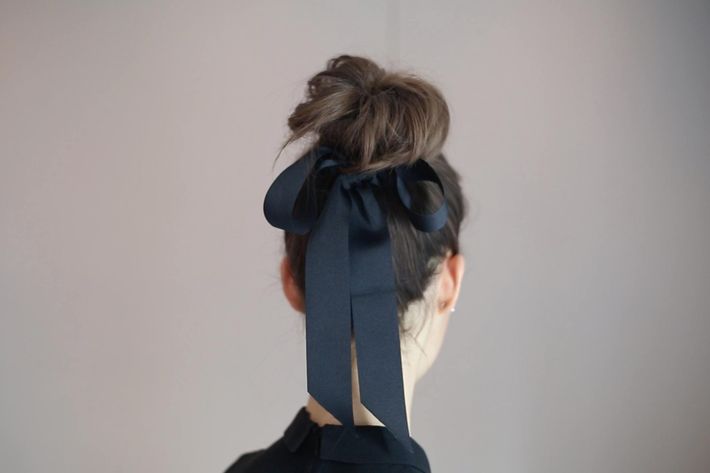 Beauty GIF: How to Get Commercial-Girl Hair

GIF Tutorial: How to Create a Ribbon Bun

hospitalization Yesterday at 7:41 p.m.
Travis Barker Has Been Hospitalized His new wife, Kourtney Kardashian, is by his side.
5 questions with... Yesterday at 5:10 p.m.
Taraji P. Henson Wants to Move to Spain, Italy, or the South of France “Yeah, ’cause … I don’t know about this place anymore.”
celebrity Yesterday at 5:04 p.m.
Chris Pratt, Noted Bible Quoter, Says He’s Not Religious “I’m not a religious person,” says the man who posts Bible verses on Instagram.
gone sale-ing Yesterday at 4:15 p.m.
Ulta Beauty Is Doing a Sale It’s Never Done Your favorite hair products are on sale thanks to its Summer of Hair Love Event.
maxwell trial Yesterday at 2:42 p.m.
Ghislaine Maxwell Sentenced to 20 Years in Prison The judge ruled that Maxwell “directly and repeatedly and over the course of many years participated in a horrific scheme” of sexual abuse.
life after roe Yesterday at 2:40 p.m.
Major Retailers Are Rationing Morning-After Pills Purchase limits on Plan B are the latest ripple effect of the SCOTUS ruling overturning Roe.
gone sale-ing Yesterday at 2:22 p.m.
Your July 4 Sale Shopping Guide That NuFACE you wanted? It’s on sale.
immigration Yesterday at 1:39 p.m.
46 Migrants Were Found Dead in a Truck Near San Antonio Officials suggested they had overheated in a tractor trailer after being abandoned by the truck’s driver.
abortion Yesterday at 1:18 p.m.
Laura Prepon Recalls Her Choice to Terminate a Pregnancy “Everyone has their own story for seeking out this medical procedure.”
drugs Yesterday at 1:00 p.m.
Tripping Down the Aisle Mushroom microdoses are the new signature cocktails.
By Jenni Avins
abortion Yesterday at 12:10 p.m.
Another GOP Candidate Fails to Understand Rape, Possibly Also Sex Yesli Vega claimed that rape rarely results in pregnancy because “it’s not something that’s happening organically.”
ask a boss Yesterday at 12:00 p.m.
‘The New Hires at Work Are Driving Me Up a Wall’ Clarifying for yourself what you do and don’t need to act on will help make the situation more bearable.
huh! Yesterday at 9:58 a.m.
Ghislaine Maxwell Reportedly Offered Yoga Lessons in Prison A letter written by a fellow detainee characterized the convicted sex offender as “genuine and kind.”
life after roe Yesterday at 9:30 a.m.
How to Protect Yourself When Seeking an Abortion Learn your legal risks and take control of your digital privacy.
life after roe Yesterday at 9:30 a.m.
Don’t Trust the DIY Abortion Advice You See on TikTok These are the risks involved.
life after roe Yesterday at 9:30 a.m.
How to Have a Medication Abortion Where to find the pill and what to expect.
life after roe Yesterday at 9:30 a.m.
The Crisis Pregnancy Center Trap And how not to fall for it.
life after roe Yesterday at 9:30 a.m.
How to Get Help for Your Abortion The abortion mutual-aid network getting patients the funds, travel, and child-care assistance they need.
celebrity June 27, 2022
Jodie Sweetin Won’t Let Police Brutality Stop Her From Protesting The actor spoke out about the viral video of police pushing her to the ground during an abortion-rights protest.
celebrity June 27, 2022
Machine Gun Kelly Reveals He Attempted Suicide in New Documentary He was on the phone with Megan Fox at the time.
More Stories