It was a simple tweet, including a photo of two NYPD officers outside their precinct house — the taller one looking dour with his hand resting on his gun, his partner barely cracking a smile. But the text, from police commissioner William Bratton, signaled a sea change: 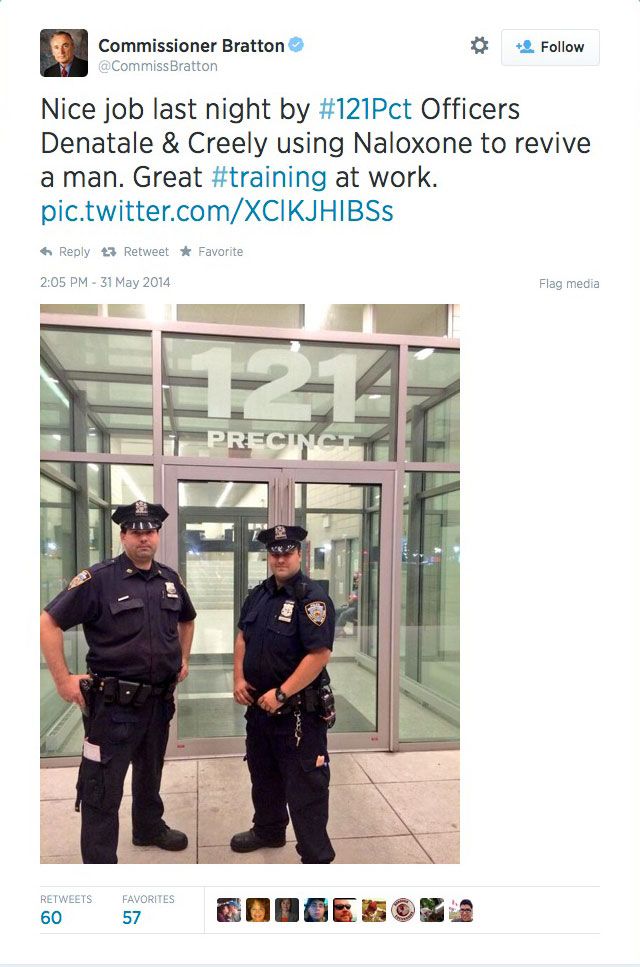 That’s right: New York’s police chief was commending his officers not for arresting a drug user — but for saving his life.

The cops had been trained as part of a new program that will ultimately provide naloxone — the antidote to overdoses that include opioid drugs like heroin or prescription pain relievers — to patrol officers and others in the police department likely to be in contact with the public. State attorney general Eric Schneiderman has budgeted $1.2 million for 19,500 naloxone kits and training for the police.

Previously, it was only available in hospitals and ambulances, but since 1996, community organizations like needle exchanges, rehabs, and hospitals have distributed the antidote to drug users and their family members, mostly on a small scale. This year, the Obama administration has pushed to make it even more available to such groups and to all types of first responders, including firefighters and police (find out where to get them here). Since overdoses now kill more Americans each year than car accidents, it’s a lifesaving initiative.

The NYPD’s naloxone program was piloted in Staten Island, where Friday’s rescue took place. A Port Richmond mother, concerned that her 27-year-old son had overdosed, called police. Once officers arrived on the scene, they assembled the naloxone nasal spray device, administered the drug, and revived the victim, who was then taken by paramedics to Richmond University Medical Center for further treatment.

We’ve come a long way from the late 20th century, which saw the NYPD’s Operation Pressure Point in the East Village, mass arrests of drug users, and widespread adoption of harsh mandatory minimum sentences for even nonviolent drug crimes. From the mid-1980s to the 1990s, widespread opposition to providing clean needles to drug users to stop the spread of AIDS was based on the idea that saving addicted people from HIV would “send the wrong message.” Nancy Reagan even argued that “if you’re a casual drug user, you’re an accomplice to murder,” while LAPD chief Daryl Gates, founder of the hugely popular but ineffective D.A.R.E. drug prevention program, said in 1990 that “casual drug users should be taken out and shot.”

Luckily, though, these attitudes seem to be dying away as public opinion drifts toward more liberal policies, such as marijuana legalization. In New York, it isn’t just the embrace of naloxone kits that’s signaling a shift in direction. The state’s “Good Samaritan” law, which went into effect in 2011, also improves matters by providing victims and those who call for help during an overdose with limited immunity from drug possession charges. This helps avoid potentially deadly delays in getting medical care owing to fear of legal consequences. Finally, we’re starting to treat drug users as human beings, not criminals.

gone sale-ing 1:13 p.m.
32 Amazon Gift Ideas That Are Also On Sale For Cyber Monday Kill two bird with one stone.
celebrity 1:00 p.m.
Is Minka Kelly Dating the Imagine Dragons Guy? She and Dan Reynolds went out for dinner for … five hours?
chaos 12:16 p.m.
Elon Musk’s Bedside Table Is Even More Terrifying Than You’d Expect Which is more concerning: the multiple guns or the cans of caffeine-free Coke?
gone sale-ing 12:04 p.m.
21 Cyber Monday Lifestyle Deals to Make Your Humble Abode a Little Less Humble It’s all in the details.
brooding 12:00 p.m.
Are There Any Kids’ Books Out There That Are … Actually Good? Wizards and dragons need not apply.
By Kathryn Jezer-Morton
celebrity 9:40 a.m.
Pete Davidson and Emily Ratajkowski Hit a New Relationship Milestone They appeared very happy to be together at Sunday night’s Knicks game.
gone sale-ing 8:06 a.m.
The 29 Best Cyber Monday Beauty Deals Tatcha, Sephora, and Nordstrom are already offering some great discounts.
how i get it done 7:01 a.m.
Aurora James Is Too Busy For This Interview The Brother Vellies designer talks 80-hour workweeks, supporting Black entrepreneurs, and wearing Issey Miyake to the gym.
astrology Yesterday at 8:30 p.m.
Madame Clairevoyant: Horoscopes for the Week of November 28 Jupiter retrograde is ending, so you can put the rose-colored glasses back on.
By Claire Comstock-Gay
sex diaries Yesterday at 8:00 p.m.
The Divorced Lawyer Who Loves Getting Ready for Dates This week’s sex diary.
snacks Nov. 25, 2022
I Can’t Shut Up About Spam Figgy Pudding It’s so wrong, and yet so right.
black friday Nov. 25, 2022
22 Best Black Friday Fashion Deals From Everlane, Nordstrom, Saks, and more.
culture Nov. 25, 2022
Rebranding Midlife Celebrities like Naomi Watts, Stacy London, and Judy Greer are determined to make a business out of menopause.
5 questions with... Nov. 25, 2022
For Quentin Plair, Stripping Wasn’t Always on the Menu But the Welcome to Chippendales star’s confidence was renewed after playing an exotic dancer on TV.
5 questions with... Nov. 25, 2022
How Amanda Gorman Fostered Her Confidence It didn’t always come naturally, but the poet built it with affirmations from her mom and using her imagery as activism.
¡hola papi! Nov. 25, 2022
‘I Lost My Creative Spark’ Don’t think about the book you haven’t written or the drawing you haven’t sketched out. Think about what role you want art to play in your daily life.
By J.P. Brammer
star material Nov. 24, 2022
A Handy Guide to Astrology’s Black Moon Lilith Lots of mystery and intrigue with this one.
5 questions with... Nov. 24, 2022
Pauline Chalamet Shares Her Most Embarrassing College Story Live lobsters were involved.
my two cents Nov. 24, 2022
How to Buy the Best Gifts With Less Money and Time It’s simple: Ask people what they want.
By Charlotte Cowles
chaos Nov. 23, 2022
Taylor Swift’s Ticketmaster Disaster Is Going to the Senate Congress will hold a hearing on competition in the ticketing industry.
More Stories