It’s official: Kendall Jenner has landed her first advertising campaign. After walking the Givenchy runway back in March, she’s now been cast in the house’s fall 2014 ads, alongside Mariacarla Boscono, Jamie Bochert, and Julia Nobis. (Always one to crash a party, Peter Brant snuck his way in there, too.) Also featured in the images, which were shot by Mert and Marcus: 61-year-old French actress Isabelle Huppert, who, if you ask us, is giving the kids a run for their money. 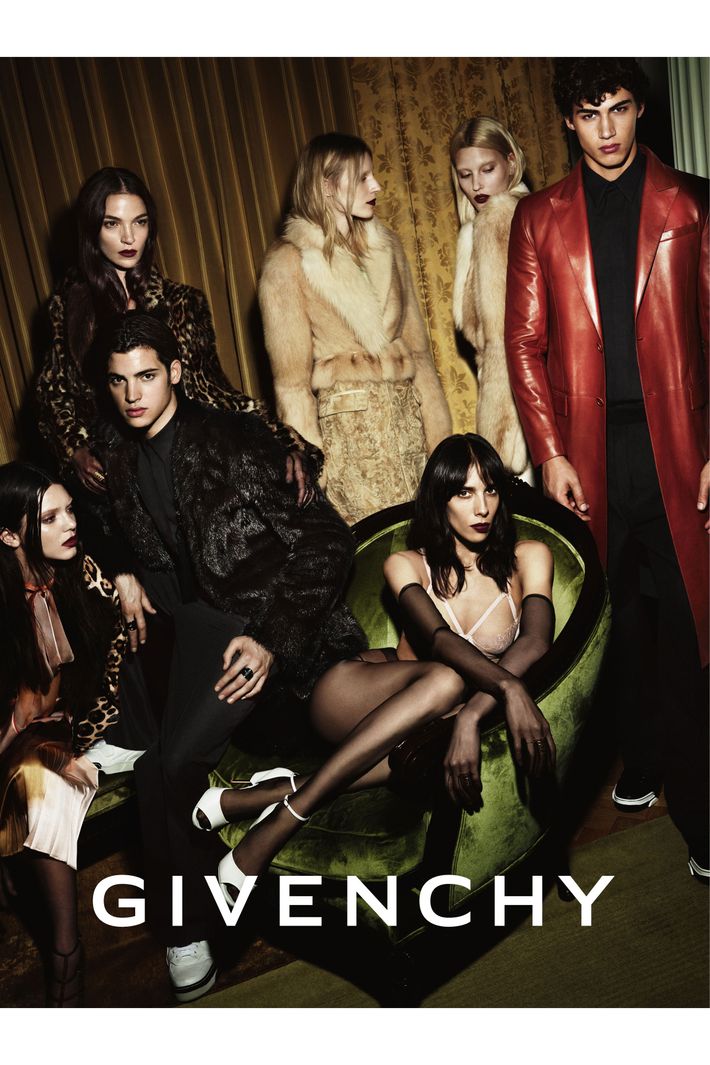 black friday 2021 Nov. 26, 2021
Do you like sales? Right this way… All the sales from J.Crew, Macy’s, Outdoor Voices, and more.
house of gucci Nov. 26, 2021
The Real Stars of House of Gucci Are the Powerful Noses We love seeing the schnoz get the appreciation it deserves.
black friday 2021 Nov. 26, 2021
The Best Black Friday Fashion Deals, All in One Place Major deals from Net-A-Porter, Everlane, Lululemon, and more.
black friday 2021 Nov. 26, 2021
All the Best Black Friday Deals at Target Adding to cart is my religion.
black friday 2021 Nov. 26, 2021
All the Best Beauty Black Friday Deals Tom Ford, Sunday Riley, Briogeo, and more.
By Kathleen Hou
house of gucci Nov. 26, 2021
A Studio 54 Doorman Tells Us How to Get In The club keeps coming up in pop culture, from Netflix series to House of Gucci. Bobby Sheridan takes us back.
By Claire Lampen
¡hola papi! Nov. 26, 2021
‘I’m So Insecure in My Bisexuality’ It sounds like you yourself have some internalized tropes about bisexuality to work through.
By J.P. Brammer
black friday 2021 Nov. 26, 2021
All the Best Black Friday Deals on Amazon These are all the best Black Friday deals on Amazon in fashion, tech, and beauty.
what's this? Nov. 25, 2021
So You Want to Talk About the Supply-Chain Crisis Everything you need to know about holiday shopping, shipping delays, and why everything is out of stock.
fixations Nov. 25, 2021
I Think About This a Lot: Lady Gaga Edition Talented, brilliant, incredible, amazing, show-stopping, spectacular, never the same, totally unique, completely not ever been done before …
tis the season Nov. 25, 2021
Every TV Show Needs a Good Holiday Episode If you’re still thinking about the time Aaron Carter said, “Merry Christmas, Lizzie McGuire,” you might love the rest of these too.
$$$ Nov. 25, 2021
Patrizia Reggiani Really Loved Being Rich Some actual quotes from the ex-wife of Maurizio Gucci that prove she is the perfect villain.
shopping Nov. 25, 2021
Glossier’s Black Friday Sale Everything from the milky cleanser to the new eyeshadow palettes are on sale.
tis the season Nov. 25, 2021
46 Gifts for the Dad Who Doesn’t Want Anything He’ll love a new sweater, cozy slippers, or a fancy coffee maker.
By Andrew Nguyen
cousin greg Nov. 24, 2021
Greenpeace Kindly Asks Cousin Greg Not To Sue Don’t worry, Nicholas Braun promises Save The Children is safe.
the bachelorette Nov. 24, 2021
The Mess Continues For This Bachelorette Blake Moynes has some thoughts.
nope Nov. 24, 2021
Behold, Aaron Rodgers’s Foot Aaron Rodgers wants you to look at his toe.
style Nov. 24, 2021
What Hanifa Wants the Fashion Industry to Learn A decade ago, Anifa Mvuemba, the founder of the label Hanifa, wanted to create more size-inclusive clothes. Here’s how she did it.
By Asia Milia Ware
crime Nov. 24, 2021
Three Men Found Guilty of Murdering Ahmaud Arbery The white men who shot and killed an unarmed Black jogger in a Georgia suburb have been found guilty of murder.
encounter Nov. 24, 2021
Christine Quinn Understands the Assignment The Selling Sunset star will do anything to make great reality television.
More Stories