Last May, Brooklyn-based carpenter Isaac Nichols made a few ceramic pots shaped like female torsos, and Instagrammed them. The pots each had two relatively natural-looking breasts and outsize nipples. Soon Isaac was bombarded with orders from his followers: friends, friends of friends, and eventually high-profile admirers like The Sill and the Wythe Hotel. In the past year, he’s sold hundreds of pots through flash stoop sales, Instagram (#freethenipple notwithstanding), and even Urban Outfitters.

The Cut met Isaac, 29, at his Greenpoint studio, where he works under the pseudonym Group Partner, to share a carton of strawberries, and talk about his surprise success, his thoughts on areolas, eroticism, and carved, wooden vaginas. (Check back later in the week for New York’s “Everything Guide to Ceramics”).

How did you get into ceramics?
Around the time I graduated from Cooper Union, I got really into collecting weird succulents and cacti. But I hated the classic terra-cotta pots that they came in. I figured that if I could just make one ceramic pot, poorly, someone out there would want to buy it. 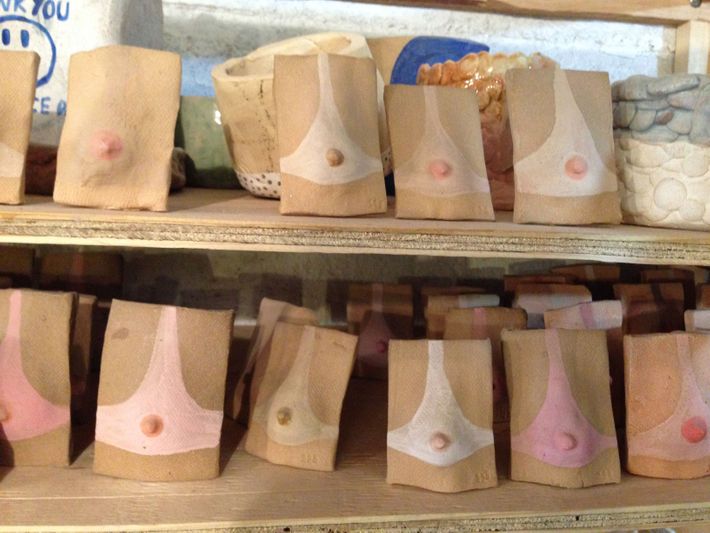 What’s the logic?
The worse you are as a craftsman, the more the response is like, Great! I can clearly see the mark of your hand on this! I realized my work would be poorly done, and thus marketable.

So you went into this pretty blind.
I was a total outsider. My first batch was 60 clay pots with faces on them. They were pretty wonky, because I rolled everything with a rolling pin, and then just tried to make the slabs of clay stick together. I figured out most of the steps online — rolling clay, and staining it, and firing it.

Then you switched over to breasts.
If you look through my Instagram, you’ll see the first breast pot I ever made. I started using Instagram the same month that I started making breast pots.

Is that where you found your customers?
Definitely. I mean, you know about my work, and I’ve probably only sold 300 pots through retailers, ever. People in Tokyo and Australia know about me, and it’s all because of Instagram — not galleries, not stores. I bet this is all going to tank eventually, but for now we’re living in the golden age of self-promotion, and it’s awesome.

Your clay nipples are pretty consistent.
It took lots of practice. Starting out, I wanted every aspect of this project to be carefully considered. So, I did dozens of these nipple test tiles. You can see which ones worked well, and which ones are pretty awful.

I keep staring at that pot that’s touching itself.
My friend Emily painted this one with me, and now all I want to do is make more of them. But I don’t have any vendors who would want this. It’s not a good business model. If I want to grow this company and sell to like, Steven Alan or something, I need to pair down and find an identity.

Well, aren’t breast pots an identity?
I mean, I definitely didn’t invent the terra-cotta pot, and breasts are probably one of the oldest subjects around. I truly believe that if you leave a guy alone with clay for long enough, he’s going to make some breasts.

Still, you’ve definitely got a type of breast that seems pretty signature.
In the beginning, I made really small breasts, based off of my own research online. I really didn’t want to do anything confrontational. I wasn’t trying to sell breasts. I was trying to sell this ode to femininity.

Like the Venus.
Yeah, well, I don’t know. Sometimes I have this weird reality check when I’m like, I’m 29, I make breast pots, and I just might get rich off of them. That’s weird! But then other times I’m like, Wait: Most of my clients are women. And a lot of lesbians, and a lot of gay men. I assumed that my first pot was going to be one of those things you only do once. But then I got really positive feedback. Everyone was like, That’s awesome. I want one. And that was really encouraging. Still, I kept thinking that the bubble would burst, and someone would be like, Dude, that’s fucked up. You shouldn’t do that. But it still hasn’t happened. 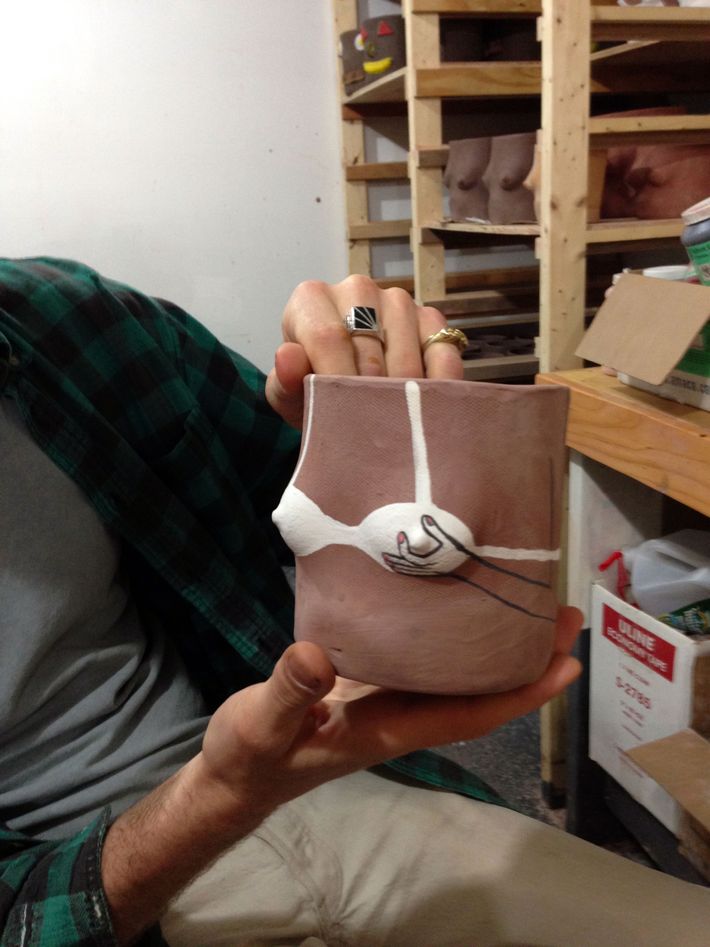 Do you have non-torso ceramics projects in the works?
Petra [Collins] and I are going to make a cast of her nose. I think it’s my new direction: a cast pot, really clean, with Petra’s nose on it. I’ll do different colors.

Just Petra Collins?
Well, I want to start with her, since she’s a big name. Plus she’s got this feminist stance. And it’s just funny. I’ll tell people, Look! Now I’m objectifying a woman.

But what about the male form?
I’ve done a few male pots, but they’re so much harder. I have to sculpt the groin and the butt, and also make hipbones that look natural. It’s formed all the way around.

So it’s a full sculpture.
Yeah. And it’s a gamble. If I want to retail the breast pot for $45, that means I have to sell it wholesale for $22. Minus my materials, my overhead, the electric bill, I’m paying myself less than $10 an hour to do this. For the male form, I’d have to sell it for close to $160 retail. I don’t want anyone to spend that much money on this thing.

You must be upping your production, now that you get so many orders.
American Apparel told me that they would order 1,000 from me once I’ve got the infrastructure. That’s like a $20,000 order. 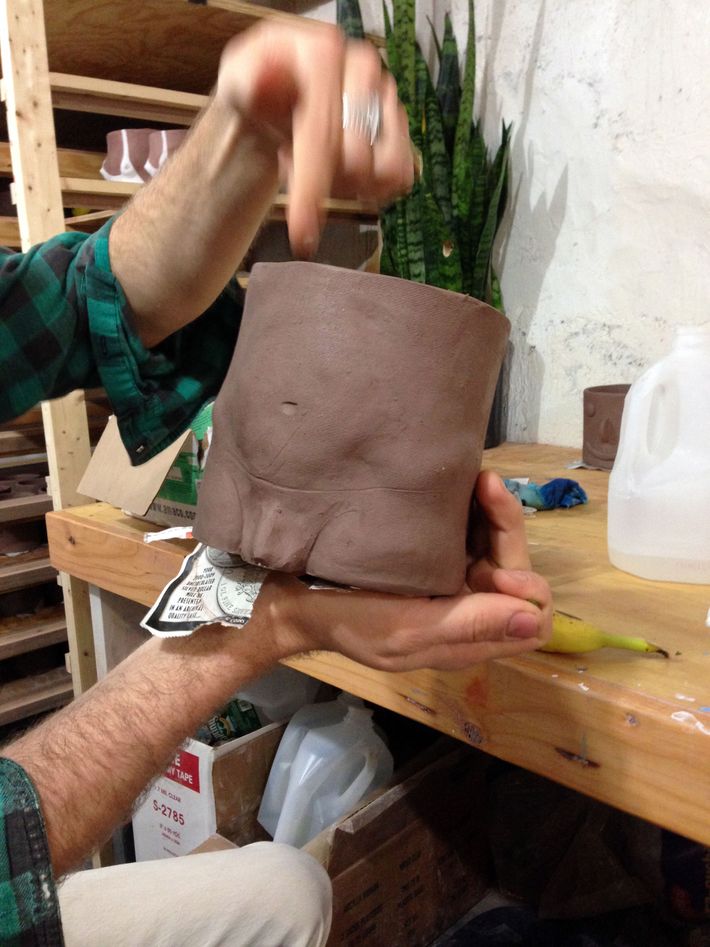 With American Apparel calling, you kind of look you’re playing into trends.
I’ve definitely thought about that. But if you try to fight it, they’ll just knock you off. I want to really own this. And that means owning the breast shapes. I have six different breast shapes that I do. They’re all within the range of what I consider natural. Plus, I’ve got six different “skin” tones, from light to dark. So the idea is I can let retailers pick the bathing-suit pattern, but not the breast size or skin tone. If they’re willing to carry my pots, they’re going to have to accept this sort of egalitarian view of femininity.

I’m picturing those T-shirts with bikinis printed on them, and huge breasts. On Canal Street.
Oh, I’m definitely aware of dancing that line. I have to be really careful, because if someone knocked off my breast pot in a tasteless way, that would be it. Game over.

How to Show Nips on Instagram and Not Get Banned

going out? 12:24 p.m.
Is This King Charles’s Getting-Ready Playlist? Selections include Michael Bublé and “Daddy Cool.”
why is your skin so good 12:15 p.m.
How This OG YouTuber Gets Her Skin So Good Deepica Mutyala on being tokenized in the beauty industry and creating a community for brown girls like herself.
style 12:03 p.m.
The Toddlers in the $600 High-Tops Luxury brands target kids, and the parents are buying.
By Matthew Schneier
celebrity 12:02 p.m.
No, Adam Levine Is Not Going on Call Her Daddy Though the suggestion that he might be prompted an interesting reaction from his wife.
always shopping 11:20 a.m.
16 Wool Coats Under $400 Because it’s getting cold out there.
keeping up with the royals 9:48 a.m.
Will Harry and Meghan Get to Go to the Coronation? Sources suspect they’ll be invited; whether or not they accept is another question.
love and war 9:00 a.m.
Can “Niche” Dating Apps Save Us? Services like Grindr, Feeld, and Muzz offer frustrated daters an alternative to Tinder and Bumble. But are they any better?
By Sangeeta Singh-Kurtz and Lakshmi Rengarajan
"wellness" Yesterday at 9:11 p.m.
Of Course Aaron Rodgers Is Going on a ‘Darkness Retreat’ It’s all part of his “era of contemplation.”
yikes Yesterday at 7:50 p.m.
Ashton Kutcher Purposely Chose To Pose Like That The awkward photos of Kutcher and Reese Witherspoon were all by design, apparently.
oscars Yesterday at 6:46 p.m.
Gina Prince-Bythewood Weighs In on the Best Actress Debate The Woman King director called out the lack of Oscar nominations for Black women.
teens Yesterday at 3:06 p.m.
Leonardo DiCaprio Is Not Currently Dating a Teen Why would you think that??
goodbyes Yesterday at 12:30 p.m.
RIP, Stripper Web For 20 years, the forum was a haven for new dancers seeking community.
ask a boss Yesterday at 12:00 p.m.
How to Answer ‘Why Are You Interested in This Position?’ in a Job Interview This is usually one of the first questions asked in an interview, and you shouldn’t wing your answer.
auto-refill Yesterday at 11:58 a.m.
The Beauty Products Beyoncé’s Makeup Artist Sir John Uses to the Last Drop Including Barbara Sturm’s Lifting Serum, Supergoop’s Unseen Sunscreen, and SkinMedica’s TNS Serum.
grammys 2023 Yesterday at 11:21 a.m.
Jay-Z Thinks Beyoncé Deserved Album of the Year Too In a TIDAL interview, he said that Renaissance “has inspired the world.”
action item Yesterday at 10:35 a.m.
How to Help the People of Turkey and Syria Two powerful earthquakes have killed more than 5,200 people.
power Yesterday at 8:00 a.m.
Inside the ‘Rampant Culture of Sex’ at ABC News T.J. Holmes and Amy Robach weren’t the only ones — “It felt like everybody was sleeping around,” said one former GMA staffer.
By Angelina Chapin
reality tv Yesterday at 7:00 a.m.
Real Housewives Helped Heather Gay Actually Get Real Her new memoir, Bad Mormon, recounts how Bravo delivered her from the church.
copenhagen fashion week Feb. 6, 2023
9 Things I Learned at Copenhagen Fashion Week Scandinavian style and its purveyors might be onto something!
power Feb. 6, 2023
What to Know About the Protests in Iran Since Mahsa Amini’s death, Iranian forces have killed more than 500 protesters, including women and children.
More Stories