Both common sense and a bunch of social-psychological literature suggest that when resources are scarce, folks tend to get more territorial and possessive, to stick with people whom they view as members of their in-groups more tightly than they usually would. An interesting new study in Proceedings of the National Academy of Sciences used face-morphing to show that white people, in one experiment at least, actually perceive black people differently when primed to think about situations in which resources are scarce.

The study mostly revolved around getting a group of white respondents to react to a range of faces generated by morphing the features of a stereotypically Caucasian face with a stereotypically African-American one. Here are some of them, from most white (left) to most black (right): 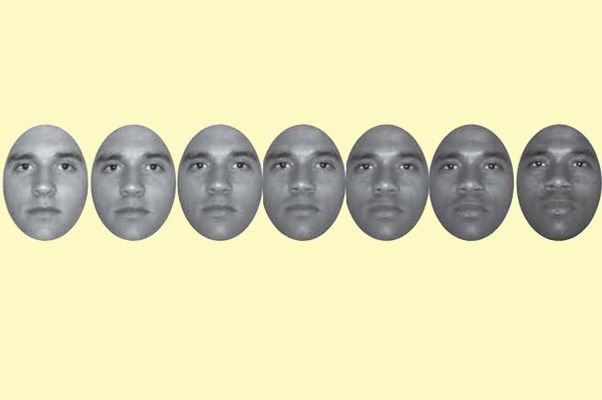 The researchers sum up their findings:

Together, our results provide strong converging evidence for the role of perceptual bias as a mechanism through which economic scarcity enhances discrimination and contributes to racial disparities. Studies 1 and 2 demonstrated that perceptions of scarcity, whether based on one’s economic beliefs or manipulated nonconsciously, increased subjects’ tendency to view mixed-race faces as “Blacker.” Studies 3 and 4 revealed that when resources were framed as scarce (versus neutral), decision makers’ mental image of African American faces became “Blacker,” and this perceptual shift was sufficient to cause a disparity in the allocation of resources. These findings demonstrate that socioeconomic context can shape perceptions of minority racial group members, and this process may contribute to the widening of racial disparities during economic stress.

The second study is probably the most interesting. In it, the researchers quickly flashed positive, neutral, or scarcity-related words, then flashed a face that was 100 percent black or white, or somewhere along the spectrum at 25 percent intervals. (The word-flashing thing is an established way of detecting bias when people might be reluctant to admit it, and forms the backbone of respected so-called implicit association tests.) Respondents were asked to determine the race of the face.

Those who had been primed with the scarcity words were more likely to see middle-of-the-road faces as black — on average, faces were identified as black if they were only 35 percent to the right on the spectrum, as compared to 40 percent for the neutral and negative groups (interestingly, there was no difference between these groups). This suggests that in-group/out-group perceptions — which we know are correlated with all sorts of not-good aspects of human nature — were heightened when the white subjects were made to think about scarcity, to the point where they were identifying faces that were more white than black (stereotypically speaking, at least) as black. Another one of the studies carried this a little further, showing that people divvied up hypothetical money-pies less equitably to a fictional black co-player in a game when scarcity-priming was used.

The standard caveats apply: This was a lab setting; in real life people make these sorts of decisions differently; and so on. But given previous research on race, scarcity, and bias, it’s a useful data point, and a useful reminder that scarcity has a lot of negative effects on human behavior — some of them a bit surprising.

first person 9:00 a.m.
Easy Target I was harassed and assaulted in broad daylight. Would bystanders have intervened if I was white?
By Vanessa A. Bee
"try everything" — shakira 8:50 a.m.
Bye, Guy In their first video as an official trio, the Try Guys say they were just as shocked by Ned Fulmer’s behavior as you were.
cut covers 8:00 a.m.
The Pain and Glory of Cori Bush In less than two years, the congresswoman built a base of power in D.C. by wearing her hardships on her sleeve.
By Rita Omokha
wtf Yesterday at 7:16 p.m.
Everything We Know About Kanye West’s Harmful YZY 9 Show At his YZY 9 show, West printed on shirts a slogan used by white-supremacist groups.
review Yesterday at 6:38 p.m.
Balenciaga Says, ‘Here’s Mud in Your Eye’ Demna toasts the wild and real.
By Cathy Horyn
power Yesterday at 5:57 p.m.
Iranian Forces Led Brutal Crackdowns Against University Protestors Despite forceful government intervention, women continue to take to the streets in defiance of government orders.
fashion Yesterday at 5:46 p.m.
Beyoncé Gave Us, Ahem, Some Visuals It’s a new Tiffany & Co. campaign, but still!
always shopping Yesterday at 5:15 p.m.
17 Work Blazers to Wear This Fall They’ll make even jeans and a T-shirt look professional.
By the Cut
power Yesterday at 4:52 p.m.
Everything to Know About the WNBA Star in Russian Custody As negotiations for Brittney Griner’s release continue, a Russian court has set a date for her appeal.
scene report Yesterday at 3:15 p.m.
Every Man at This Party Is Vouched For Tired of “liars and manipulators,” a group of single women started a mixer for meeting guys you can actually trust.
thanks i hate it Yesterday at 3:06 p.m.
Planned Parenthood Is Not a Fan of Blonde’s Talking Fetus The organization accused the Marilyn Monroe–inspired film of contributing to “anti-abortion propaganda.”
uh oh Yesterday at 1:03 p.m.
Kim Kardashian Is in Trouble for Promoting Crypto She recently paid the SEC $1.26 million for illegally plugging EMAX tokens.
brooding Yesterday at 12:00 p.m.
My Family, My Playlists The soundscape of a house is a shared space where we can expand into our feeling of belonging.
By Kathryn Jezer-Morton
bros Yesterday at 11:47 a.m.
Billy Eichner Is Disappointed With the Straights Eichner’s gay rom-com, Bros, opened in theaters this weekend, but the box-office performance was less than stellar.
how i get it done Yesterday at 7:00 a.m.
How Pantheon Editor Concepción de León Gets It Done She doesn’t write about self-help anymore, but she still had a lot of valuable career, money, and life advice to share.
By Bindu Bansinath
rip Oct. 2, 2022
Sacheen Littlefeather, Actress and Activist, Dead at 75 She famously refused Marlon Brando’s Oscar for him in 1973 and was blacklisted for it.
astrology Oct. 2, 2022
Madame Clairevoyant: Horoscopes for the Week of October 3 Mercury retrograde has finally ended. Although its effects will take time to wear off completely, we can all breathe a sigh of relief.
By Claire Comstock-Gay
sex diaries Oct. 2, 2022
The Writer Staying on Her Crush’s Couch This week’s sex diary.
thanks i hate it Oct. 2, 2022
Kylie Jenner’s Bleached Eyebrows Look Very Familiar Kim Kardashian’s little sister is following in her footsteps.
celebrity Oct. 2, 2022
Britney Spears’s Mom Apologized to Her in an Instagram Comment “I am soooo sorry for your pain,” Lynne Spears wrote in part.
More Stories