For every one marginally viable message I receive on Tinder, I get at least three that are offers of dick pics, requests for quickies, or polite invitations to sit on a new friend’s face. It’s like some horrible hydra — cut off one head, and three creepier things sprout forth.

Enter Wyldfire, an invite-only dating network where women are the gatekeepers — female users can sign up freely, but any man on the app has to be invited, theoretically creating a network of only women-selected desirable, dateable, single men. “Everyone has that one friend who they think is a great-quality guy but they either don’t want to date themselves or want someone else they know to date,” says brand manager Jesse Shiffman. Founders Brian Freeman and Andrew White created the app,“designed specifically around the needs of women,” after hearing several of their female friends complain about “getting creeped on” whenever they used Tinder. 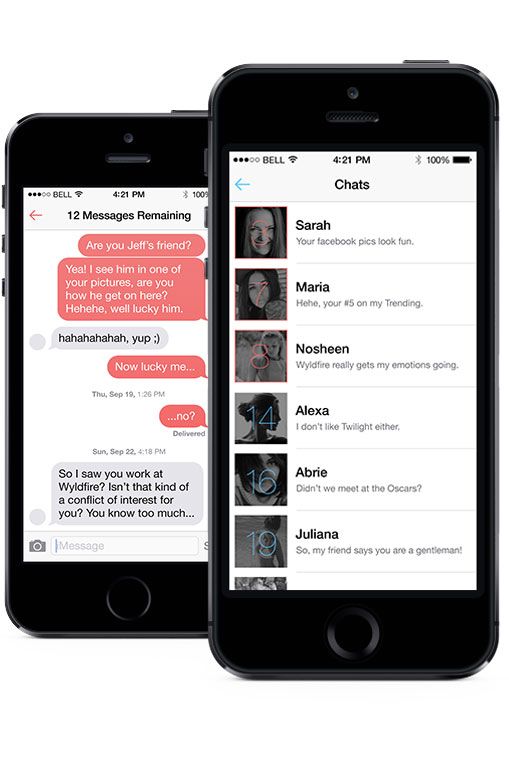 While creep elimination is the first priority, Wyldfire introduced a few other features to try to improve on other common complaints people have about online dating: Every profile photo is run through a black-and-white filter (“everyone looks their most attractive in black and white”), conversations are limited to 20 exchanges to expedite people meeting IRL, and information is culled from Instagram and Facebook, therefore profiles are effortless to create.

An automatic filter in place to keep out the sleazeballs, unlike the free-for-all that is Tinder? Sounds great in theory. By using existing social networks to build an expanded dating pool, it simulates a more desirable, “organic” dating experience — like Hinge, but with more options. Wyldfire isn’t the only company to go this route; two Seattle-based developers Katrina Hess and Susie Lee are also in the early stages of making a female-friendly app, Siren. Set to launch in the fall, Siren attempts to put the control in women’s hands — they are the only ones who can admit “good men” to use the app.

But here’s a problem: How many men in your inner circle do you consider dateable that you don’t want to date yourself? I have maybe two. On a good day. Will  “female-centric” dating networks turn into a smorgasboard for dudes? They might be “safer,” but they don’t necessarily increase chances of dating success for the female user.

White concedes, “You might be right that there will be some imbalance in the beginning, but it’s not the worst-case scenario because it’s so much better than what exists out there right now in the sea of misery [laughs]. At least you know that the guys you’re talking to have been approved by somebody.“

“Most dating sites suffer from somewhere around 60 to skewing as high as 80 percent male-to-female ratio,” explains Freeman.“Women aren’t comfortable being surrounded by a sea of men. We’re trying to create an app that is more of a 50-50 balance. It’s more like your real life, just better.”

I wasn’t quite satisfied with that answer, so I reached out to Robyn Exton, the creator of Dattch, the first dating app specifically tailored to lesbians, to ask what it would take to make a creep-proof dating app for women. When creating Dattch, she thought a lot about the ways women prefer to communicate and what kind of a network would attract them. “I mean, there’s not just one thing that you can say, That’s the thing! This is what works well for women. It’s a myriad of all these tiny, small, different things, as women process information and deal with things differently. It’s not just one fix. That’s what we discovered,” she says.

With that in mind, Wyldfire might offer a feature to address the wide array of problems that make app-based dating kind of awful. The “metrics” tool provides detailed statistical data from your own profile that serves as real-time feedback. For example, users can see how many likes they get versus how many they give, how many visitors they get in a day, etc. If a user changes a photo, she can see how many more visitors she gets. Freedman says, for example, men see the most positive results when they take down the ever-popular shirtless selfie snapped in the bathroom. If data is telling people how bad (or good) they are at this, we all might be reprogrammed to do it better — and with fewer pornographic opening messages.

So, for now it seems creating a better dating app for women means teaching men to eliminate the unsolicited dick pics once and for all. Easy, right?

This App Will Make Online Dating Safer for Women