The first few shows of Fall 2014 Haute Couture Week — which kicked off Sunday in Paris — brought the expected grandeur of intricate beading and fanciful dresses, but also some of the more interesting ways to wear them. From Dior to Giambattista Valli, we saw actually wearable, albeit luxe, looks in bold hues and creative new silhouettes. Below, our four favorite looks from yesterday’s shows.

1. Last night’s Giambattista Valli show featured a very different take on its traditional finale: A couture bride came down the runway in an everyday pajama top. It was paired, of course, with degradé, feathery tulle ball skirts — which looked nearly effortless when paired with the silky separate.

2. Raf Simons again shows us why Dior remains so exciting season after season. The voluminous Marie Antoinette silhouettes dominated Instagram, but it was his evolution of the house’s Bar jacket that stood out to us. Beaded, layered for effect, and worn over black turtlenecks and slim pants, it was couture styled in a surprisingly wearable way. 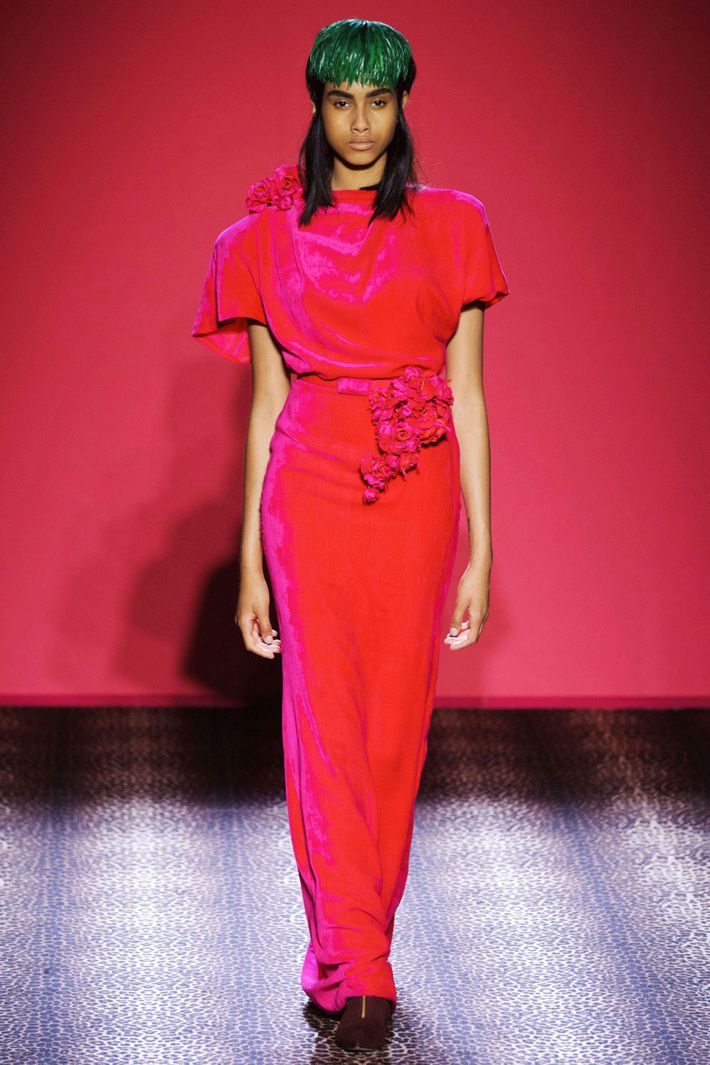 3. Marco Zanini’s second outing for Schiaparelli featured headpieces and many a petit chapeau designed by Stephen Jones. While there was a madcap explosion of sequins and animal prints (even the runway was dressed in leopard), we loved a shocking pink velvet gown with floral appliqués — and paired with, brilliantly, a jungle-green feather headpiece. 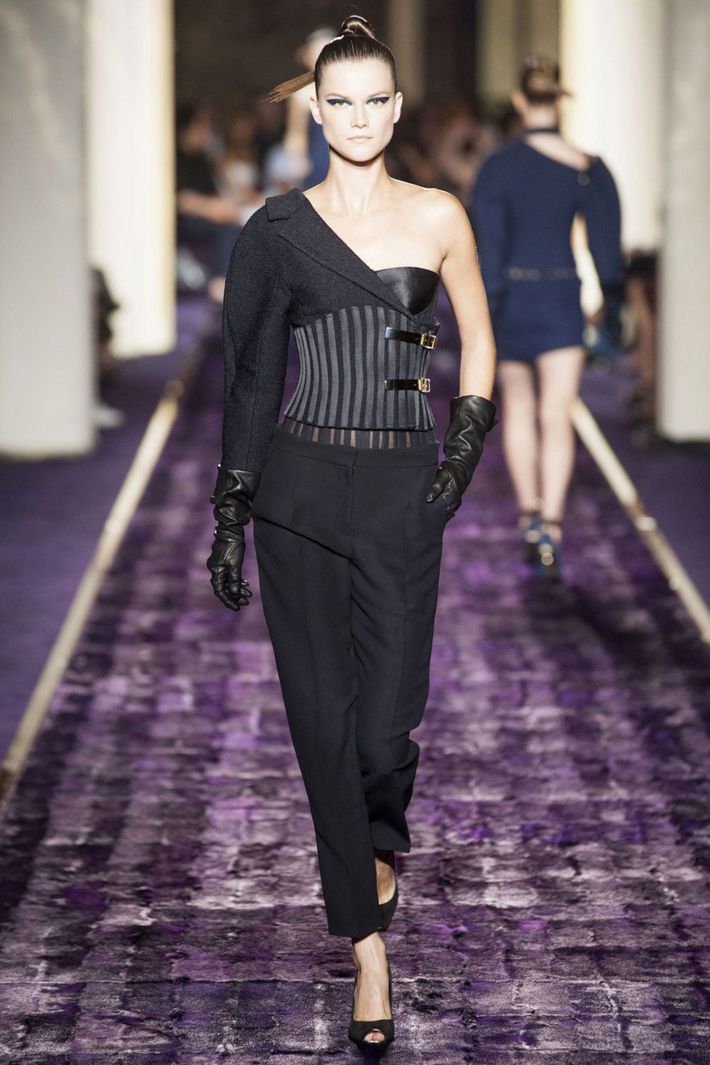 4. At Sunday evening’s Atelier Versace show, asymmetric silhouettes dominated the runway, with both sleeves and pants alternating in starring roles (and even a few one-legged jumpsuits). This one-shouldered power suit with boned and buckled corsetry looked strong and sleek.

5 questions with... 9:15 a.m.
Billie Eilish on Her Style Changes and Smelling Like a Christmas-Tree Lot We have the exclusive on her second fragrance, Eilish No. 2, which is woodsy and spicy.
look book 8:00 a.m.
The Look Book Goes to We Met IRL  We talked to singles at the speed-dating series for people of color, whose tickets tend to sell out minutes after they go live.
money talks 8:00 a.m.
3 Women on How Much It Cost to Get Married in 2022 “My sense of money got so warped that it stopped being real to me.”
By Charlotte Cowles
grief 8:00 a.m.
‘Nature Has Its Own Way of Ending Life. I’m Changing the Manner and the Time.’ Days before her grandfather-in-law was set to fly to Switzerland for a voluntary assisted death, Rachel Handler called him to say good-bye and more.
By Rachel Handler
obits Yesterday at 9:14 p.m.
‘Gangsta’s Paradise’ Rapper Coolio Dead at 59 A legend of ’90s hip-hop.
review Yesterday at 6:28 p.m.
Excess Everywhere at Paris Fashion Week Dior showed nudity with a youthful eye. Saint Laurent hit repeat.
By Cathy Horyn
culture Yesterday at 4:06 p.m.
Riverdale Chooses Chaos With ‘Don’t Worry, Darling’ Episode The show’s season seven premiere has a very interesting title.
celebrity Yesterday at 4:00 p.m.
Sounds Like Hailey Bieber and Selena Gomez Are at Peace On a new episode of Call Her Daddy, Bieber denied the rumors that she and Gomez are feuding after she “stole” Justin Bieber.
where did you get that? Yesterday at 3:34 p.m.
Reign Judge on Her On-set Essentials and Wes Anderson Films Plus the beauty products she always keeps on hand.
breast cancer Yesterday at 3:10 p.m.
Katie Couric Opens Up About Breast-Cancer Diagnosis In a new essay, Couric encourages her audience to get regular mammograms.
always shopping Yesterday at 3:10 p.m.
18 Rain Boots to Wear Even When It’s Not Raining From affordable Hunter dupes to edgy lug-style boots.
your next move Yesterday at 1:36 p.m.
‘Why Do I Outgrow Jobs So Quickly?’ It’s your responsibility to make each role your own once you settle into a new company.
sports Yesterday at 1:08 p.m.
What Exactly Is Going on With That Disgraced Celtics Coach? Ime Udoka’s suspension over inappropriate relations with a fellow staffer leaves his team and the public with questions.
how i get it done Yesterday at 12:52 p.m.
How Makeup Artist Katie Jane Hughes Gets It Done During Fashion Week “I feel weirdly unfulfilled if I wake up at nine o’clock; I feel like I’ve wasted half of my day.”
By Asia Milia Ware
sober questioning Yesterday at 12:00 p.m.
Following the Rules Won’t Keep Me Sober Making recovery a contract with myself kept me from the shame spirals that lead to relapse.
By Ana Marie Cox
culture Yesterday at 11:00 a.m.
The Deadly Glamour of Blonde How much of the depicted violence Marilyn Monroe endured was necessary to tell her story in this film?
celebrity Yesterday at 10:48 a.m.
Hayden Panettiere Calls Losing Custody of Her Daughter ‘Heartbreaking’ In a new interview, she opened up about her split from Wladimir Klitschko and her struggles with addiction.
shakira Yesterday at 10:43 a.m.
Shakira Could Face Jail Time Over Alleged Tax Fraud A Barcelona judge has approved Shakira’s tax evasion case to go to trial.
student loans Yesterday at 10:28 a.m.
How to Get Your Student Debt Canceled Applications for student-debt cancellation should be available in early October. The sooner you file, the better.
holiday gifts Yesterday at 10:10 a.m.
43 Gifts for the Dad Who Doesn’t Want Anything He’ll love a new sweater, cozy slippers, or a fancy coffee maker.
By Andrew Nguyen and Brooke LaMantia
More Stories