VH1’s Dating Naked continues to push the boundaries of courtship and creatively expand the list of activities you can do in the nude. Last night, Steven (the self-proclaimed “King of the Nerds”) and San Francisco babe Taryn disrobed to find eternal love. Steven is a jolly Australian with the approximate size and spirit of a leprechaun. Even though he loves to tell dirty jokes and really, really loves girls, he keeps choosing the wrong girls, and so is alone. As is Tayrn, a blonde San Franciscan who can’t seem to escape the douchebags that infest the Bay Area. Naturally the producers set them up first for a naked-waterskiing date.

Date 1:
While Taryn takes to the sport like a water nymph, poor jolly Steven struggles to stand up, no matter how hard he tries. He exposes himself in so many ways, but just can’t stand and master the wave. And that, my friends, is how love works for some of us. This show is full of metaphors. 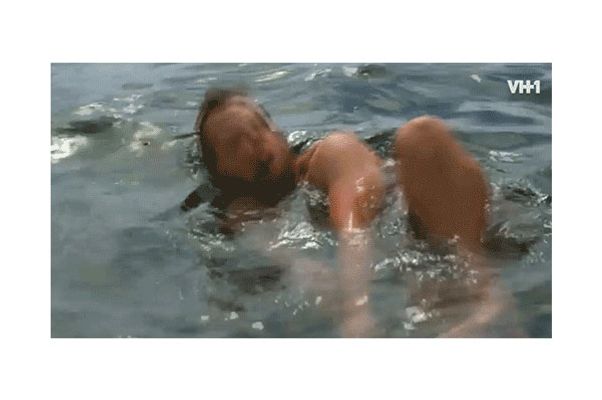 The Passion of Steven culminates in him trying to get out of a chair while a pillow sticks stubbornly to his bare butt.

Date 2:
After the trials of Date 1, Steven is excited to meet his second lady. Because he’s naked, we watch his entire body clench in anticipation as he meets Ashley, a sassy, curvy southern lady. She looks like she wants to drink Steven under the table and then crush him against her forehead like a beer can.

While riding an ATV through the jungle, Ashley observes that Steven has more of a “feminine touch” so insists on driving. You might wonder, “Does anybody get a surprise erection, on this show?” But please note that this date involves two sweaty people riding an ATV, casually pressing their genitals into each other’s grass- and mud-covered backs. No, sir. No erections today. 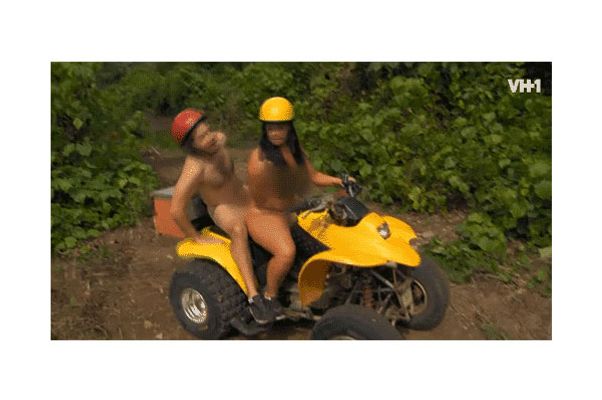 Over on the beach, Taryn awaits her second suitor — and in walks Dar, an Israeli who lives in Portland, Oregon. Dar has flowing hippie locks and an ill-chosen septum ring, none of which matters, because he struts across the sand and presents himself as a proud, naked lion. He’s the kind of guy who would seem naked even if he was fully dressed, and is into “making art” and “taking pictures” and massaging you with handmade essential oils. 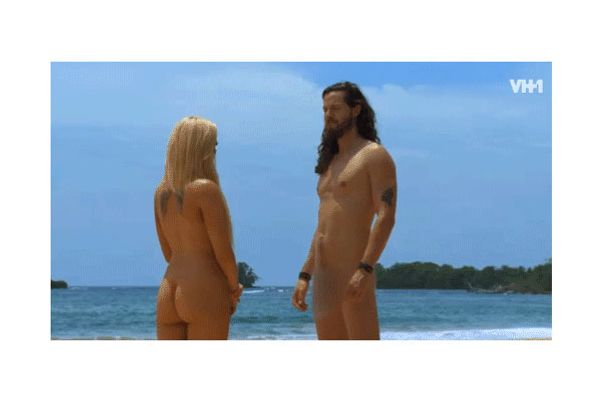 Time for the first photoshoot date! Dar has obviously done this before. Taryn has not. But she goes with it and makes dead-eyes for the camera.  Since she is nude and Dar has just made love to her with his camera lens and his soft words, she feels comfortable enough to ask Dar’s opinion of her fake nails, fake hair, and fake tan:

High off her tantric-sex encounter with proud lion Dar, Taryn meets megabro Andrew. To be honest, I’m not sure what happened on this date. I was too busy trying to deduce the exact size of Andrew’s junk based on the size of his blur. It was an uncommonly large, blurry triangle. Later, over fondue, VH1 made a funny joke by providing large, uncut bananas. Taryn used this opportunity to fellate said banana. Andrew knew what was up.  She has found her soul’s counterpart.

And then, finally, Steven gets a break. Marissa (into cosplay, designs video games, sounds like an anime character) is a worthy queen for his nerd kingdom. The conversation goes something like this: I live in Hollywood. I live in Hollywood! You’re naked in this weird place? Me too! Let’s get married! 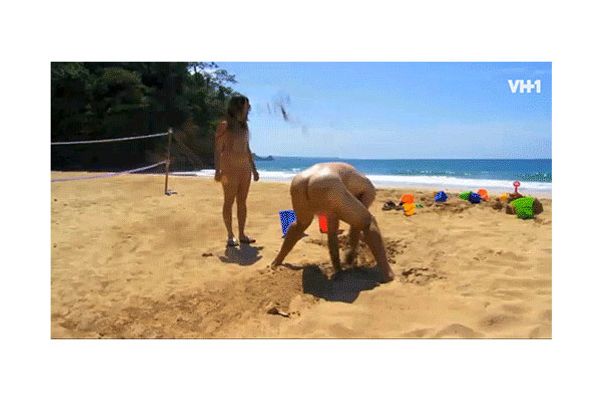 But after stealing his heart by building him a dick-shaped sand castle, she reveals that she’s a total cos-playa and would most likely crush his tiny leprechaun heart to bits.

After the dates, all six contestants head back to the Jungle Villa for one last final skinny-dipping session.

Now, let’s take a moment to discuss the show’s commitment to naked pool time. We’ll be dealing with it for the rest of the series, and it’s horrible, because at some point we are forced to watch each contestant get out of the pool by throwing his or her leg over the edge, splaying their butts to the world, thereby turning every viewer into an amateur proctologist. This is where love comes to die, VH1. In the pool of butts in the Jungle Villa.

I digress. Everyone is naked and drinking! But while they strip down for a nakey-swim, they also strip down to reveal their soul’s very essence: Dar is jealous and judgmental and hates body shots. Andrew is a bro. Taryn loves bros. Steven is sad and tries to have the DTR talk with Marissa, because he’s really afraid of having his heart broken.

In the end, the King of the Nerds takes a chance on his Poly Queen of Cosplay. Taryn sends Dar back to Burning Man, and naked-frolics into the sunset with her big-blur bro-y bro.

Most awkward naked activity of the episode: A push-up competition. 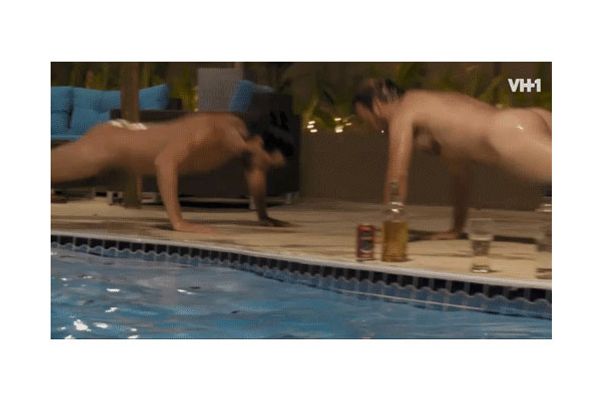