Ariel Schrag’s new novel, Adam, is every bit as juicy as the plot synopsis suggests: An awkward, insecure 17-year-old straight boy visits his cool lesbian older sister in New York for the summer, goes to a gay club, discovers he passes as a trans man, seduces the (lesbian) girl of his dreams — and continues to lie to her about his age, identity, and anatomy for the rest of the summer. The resulting book is both mortifying and hugely entertaining, not to mention hilariously graphic (imagine a straight teenager losing his virginity with a strap-on, carefully camouflaging his dick with a tightly wound ACE bandage) — but it’s also a nuanced representation of the New York LGBT scene in the mid-2000s.

Schrag — who’s best known for her graphic memoirs about her Berkeley High School years ( Awkward and Definition, Potential, and Likewise), as well as her stint as a writer for The L Word — moved to New York in 1998, when she was 18, and the characters in Adam reflect some of the self-righteousness and misogyny she observed among her young lesbian and trans friends. “On TV and in YA novels, there’s often this sort of preciousness around queer characters,” Schrag told the Cut. “I just find that boring.”

The Cut spoke with Schrag about YA morals, mortifying narrators, and making fun of her former self.

To start with the obvious, where did the idea to have a 17-year-old cis straight boy pretend to be a trans man come from?
I was really interested in this phenomenon from my early 20s where a lot of my friends who were lesbian-identified were transitioning into men — and a lot of my friends who were lesbian-identified were dating trans men. I was fascinated by how that shifted people’s sense of identities. With lesbian communities, there’s this sense that they’re man-hating. Sometimes it is true, but I think it’s more that there’s a freedom lesbians feel expressing dissatisfaction with men because they don’t have to date them. So when a lesbian is suddenly dating someone who is very male-identified — and not just trans-identified, but male-identified — I was interested in how that changes. I thought it would be really interesting to insert the “enemy” — this privileged, white, straight, cisgender boy — into that space, since it felt like lesbians were either dating or becoming this thing.

You’ve said in other interviews that you wanted Adam to be as mainstream and conventional as possible. Why?
I was interested in what happens when the most privileged person intersects with a group of marginalized people. There are so many stories where you see a misfit trying to prevail in the mainstream, so I was curious: What if the mainstream needed to prevail in the marginalized space?

It’s interesting — Adam felt much younger than the protagonists I’m used to reading about, and he can be really mortifying. He’s incredibly insecure, and he’s often saying and thinking really naïve and offensive things. What was it like to write in his voice?
It really felt very natural. I’m not sure what that says about me. Actually, when I first conceived of this book, I thought about making the Adam character a man in his mid-30s, but I just couldn’t get into his head. I hated him — it just wasn’t working. As soon as I thought about him as a teenager, it made a lot of sense and his voice just felt very natural. In terms of his emotions and inner life: That’s just something that comes from me. And the specifics of being a teenage boy — the internet porn, and some of his more clueless, naïve attitudes — I took from the straight men in my life. Friends of mine who are very open-minded and good-hearted people, but are just sort of clueless about a lot of things about queer life and the queer community, and sometimes say things that come across as offensive.

The book is full of relatively graphic, anatomically detailed sex scenes. Did it feel important to include that?
It just wouldn’t make sense not to include it. If you’re having somebody pretending to be born into a different body than he’s saying he was, you have to talk about what that body is, and how he deals with that.

Also, the sex scenes are hilarious. Having a straight boy lose his virginity with a strap-on is pretty genius.
Well, that was sort of like my own revenge. Having had to have done that myself, I want to make all straight teenage boys do that. I mean, that was a big motivation for the book — I was like, This is going to be so fun to write. 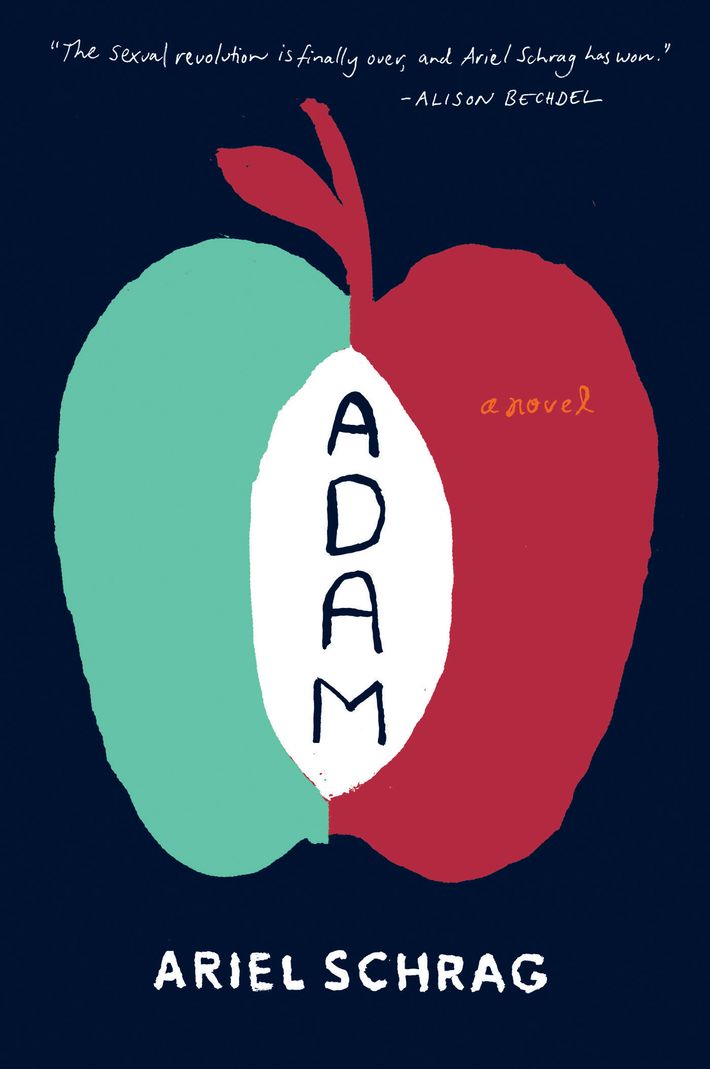 The whole time I was reading this book I was so anxious for Adam. I’m a terrible liar, and watching this lie go further and further, I was sure it was going to end horribly. But it was interesting that the ending suggested maybe his lies weren’t as big of a deception as I was assuming.
It’s really interesting. Just in the past few weeks that the book has been out, I’ve been following reviews and I’ve seen a lot of people saying, I loved this book until the end, and then I wanted to hurl it against a wall. There’s a lot of rage at the way the end plays out, and I find that really interesting. Rather than people saying Is this believable, and if it’s believable what does it mean?, they’re sort of angry at me, the author, for not punishing somebody for doing this. But fiction is not always a moral lesson. I think part of the reason it’s getting that response is because there’s sort of a YA crossover — since it’s very much in the head of a teenager, a lot of people are approaching the book as a YA novel. I think the YA/adult divide is pretty silly and arbitrary, but YA books generally tend to have a moral or lesson at the end — whereas adult fiction is allowed to be a little more ambiguous and let people think about things. Really it should be like, What does it mean if this could happen, and what are the issues that brings up? And instead, people are just really angry that a straight white boy gets away with something.

To me, the more interesting reveal isn’t so much in the way Adam changes, but in the way [Adam’s girlfriend] Gillian changes. And a lot of people have been upset — Oh, this lesbian didn’t want to have sex with a penis, and now she’s doing it, and what does that mean? And I actually think that Gillian is somebody who had this political lesbian identity forced on her. In the story, she gets a lot of attention as a teenager for having an ACLU court case about bringing her girlfriend to prom, and ends up getting all this fan mail from lesbians all over the country, and is very set in her lesbian identity — and I think that’s something that happens to a lot of people who come out early, especially when sexuality becomes the defining factor of their existence. And I’m really anti that — if anything, I would say the book is very much an assault on that kind of labeling. Gillian is someone who, in my mind, is interested in men — trans or cis — and she almost needed Adam to get to the point where she could acknowledge her attraction to men. So to me that’s the shift in identity that happens, even more so than Adam’s.

You went to Columbia for undergrad, right? Were there specific elements of your own experience as a young person in the New York LGBT scene that you wanted to represent in the book?
Yeah, I moved to New York when I was 18, in 1998, and then I was here until 2006, when I moved to L.A. for four years, and then I came back here in 2010. I had always really romanticized New York, and a lot of Adam’s experiences are based on my experience of moving to New York from the Bay Area, and falling in love with this place, and being excited and scared and confused. That’s not so much about sexuality or gender identity, but it is about the experience of feeling like you’re starting your adult life. And also, I was interested in looking at the specific self-righteousness that was prevalent in our crowd. I found it really funny. And I think that’s something most people in their late teens and early 20s have — they’re self-righteous about whatever it is, and we happened to be self-righteous about gender and sexuality. I found the idea that somebody would have a feeling of power and superiority because of a marginalized status really interesting. And I did that all the time when I was in my early 20s — I would just spout off some rhetoric verbatim that someone else had told me and then act really self-righteous about it. A lot of the book is me making fun of myself.

See All
olympics 2021 3:19 p.m.
All the Best Outfits From the Olympic Opening Ceremony From designer gowns to fanny packs.
are u coming? 3:00 p.m.
Raving With Hot Goths in Queens Bushwick meets Bridgerton meets Berghain meets the Baroque.
party pics 2:43 p.m.
The Bestest Party Looks of the Week Including an ingenious way to adapt a suit for 90-degree weather.
friday sales 2:34 p.m.
20 Things on Sale You’ll Actually Want to Buy: From Camper to Crate & Barrel Including a cooling linen quilt and our favorite noise-canceling headphones.
settlements 1:24 p.m.
Mario Batali’s Former Restaurant Group to Pay $600K Sexual-Harassment Settlement An investigation by the office of New York attorney general Letitia James found the business violated city and state human-rights laws.
arson 1:20 p.m.
Did Someone Set Beyoncé’s House on Fire?! A blaze at a New Orleans mansion believed to belong to her and Jay-Z is being investigated as arson.
pictograms 11:55 a.m.
New Sport Alert!!! The human pictograms portion of the opening ceremony is the best part of the Olympics so far.
:') 10:56 a.m.
Mr. Olympics Has Arrived Pita Taufatofua, Tonga’s hunky shirtless flag-bearer, is back to help open the 2020 Tokyo games.
tokyo olympics 10:36 a.m.
What an Eerie Opening Ceremony The Tokyo Olympics kicked off to a mostly empty stadium.
recommendations 10:00 a.m.
The Last Letter From Your Lover Is a Yearn Extravaganza Beware: This movie may make you want to write a letter to your ex​​
fashion 9:00 a.m.
Who Is Lisa, and Why Is She Saying ‘Gah?’ How a store with a gibberish name became a pandemic success story.
¡hola papi! 6:00 a.m.
‘Am I Petty?’ We all have people we don’t like. But you’re letting your enemies live in your brain rent-free.
By J.P. Brammer
tastemakers Yesterday at 6:00 p.m.
The Designer Winning Boxing Championships Nellie Partow is dedicated to strength and empowerment.
power Yesterday at 5:47 p.m.
Washington Post Sued for Gender Discrimination Reporter Felicia Sonmez says she was banned from covering sexual misconduct after going public with her own assault allegations.
olympics Yesterday at 4:58 p.m.
A Breastfeeding Olympian Won’t Bring Her Son to Tokyo The Spanish swimmer expressed her “disappointment and disillusionment” with the Games’ COVID restrictions.
2020 olympics Yesterday at 3:56 p.m.
The Ambivalence Olympics Can you still love the Games with so many reasons to loathe them?
By Claire Lampen
the object of our affection Yesterday at 3:16 p.m.
I’m Obsessed With These Cheeky Metallic Shorts I’ve been seeing them everywhere.
By Asia Milia Ware
culture Yesterday at 2:30 p.m.
What Is This Accent Doing? Nicole Kidman does it again in the Nine Perfect Strangers trailer.
celebrity Yesterday at 1:04 p.m.
Tommy Dorfman Shares That She Is Trans “Today is about clarity: I am a trans woman. My pronouns are she/her. My name is Tommy.”
culture Yesterday at 12:48 p.m.
Anna Faris Secretly Got Married She and Michael Barrett recently eloped in Washington state.
More Stories