There are salty New England seaside getaways, and then there’s Captain Jack’s Wharf. Located in Provincetown’s West End, it was built at the turn of the last century for fishermen to store their bait and tackle and quickly became an artist hangout. By the 1940s, it was where Eugene O’Neill and Tennessee Williams famously caroused at all hours of the night. (O’Neill and the Provincetown Players founded the Playwrights’ Theater here.) These days it’s still a ramshackle row of bungalows, Adirondack chairs, and weathered buoy-adorned pilings, all maintained by Gregory Saint Jean, the wharf’s manager and unofficial captain. Perched at the end of the narrow pier is Spindrift Hesperus, a cottage surrounded by water on all sides at high tide and a sandy beach the rest of the time (the tidal range is 13 feet). The owners, who purchased the property six years ago, left the house mostly as they found it; they removed the layers of paint that hid the original floors in the open living room and redid the kitchen and bathroom. The furnishings are spare but comfortable; the ’40s-era rattan sofa complements the outdoor furniture on the deck beyond. It’s here that they spend most of their time: where looking out on Cape Cod Bay toward the Long Point lighthouse can be enough activity for the day. 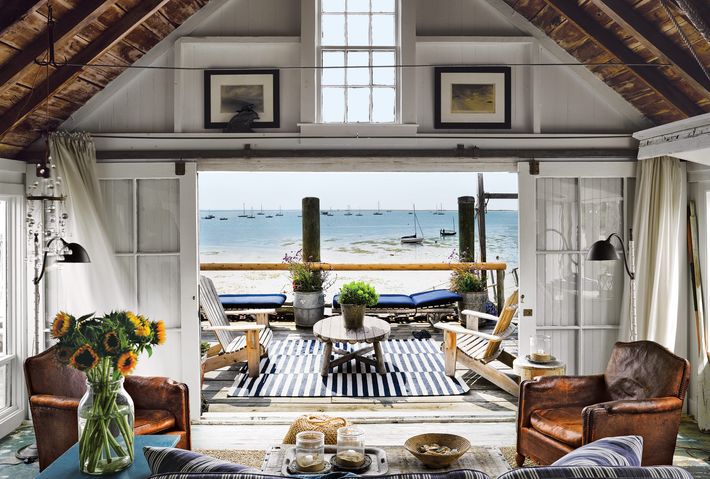 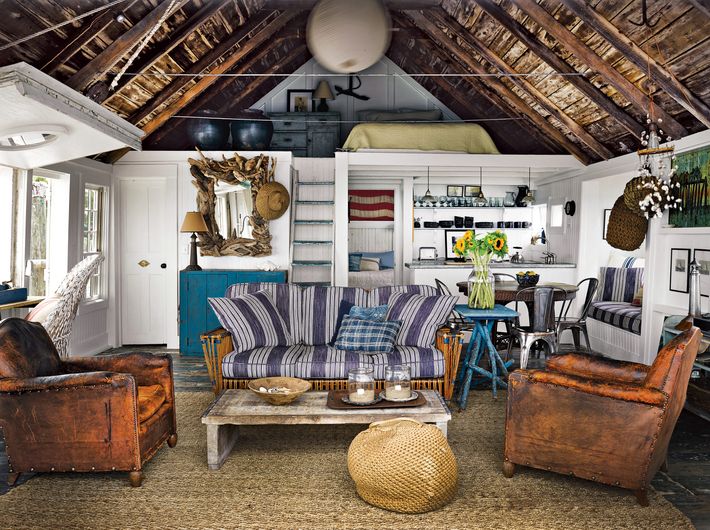 The main sitting room opens up to the kitchen, with a view to the bedroom, and stairs leading up to the sleeping loft. The rattan sofa is covered in fabric from Ralph Lauren Home. The leather club chairs are vintage. 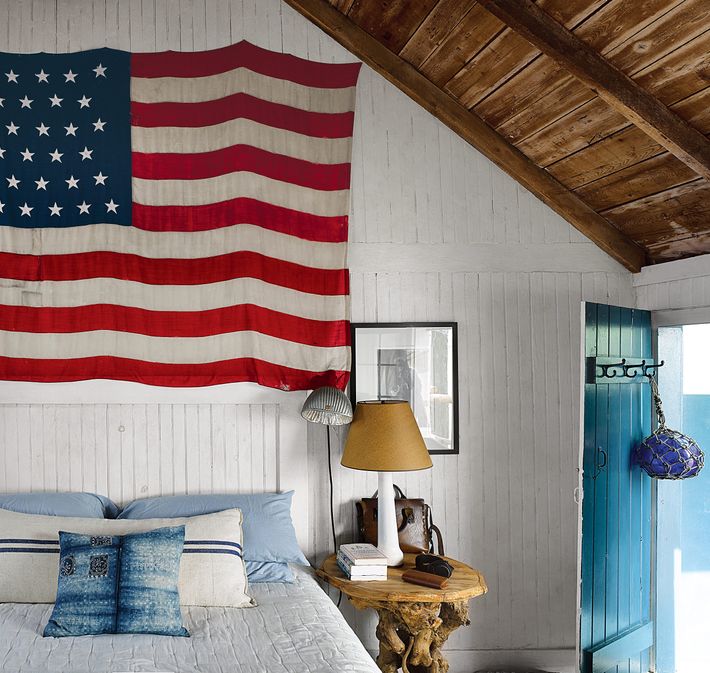 The owners found a tattered American flag that is more than a century old. The blue door leads to a shower cabana. 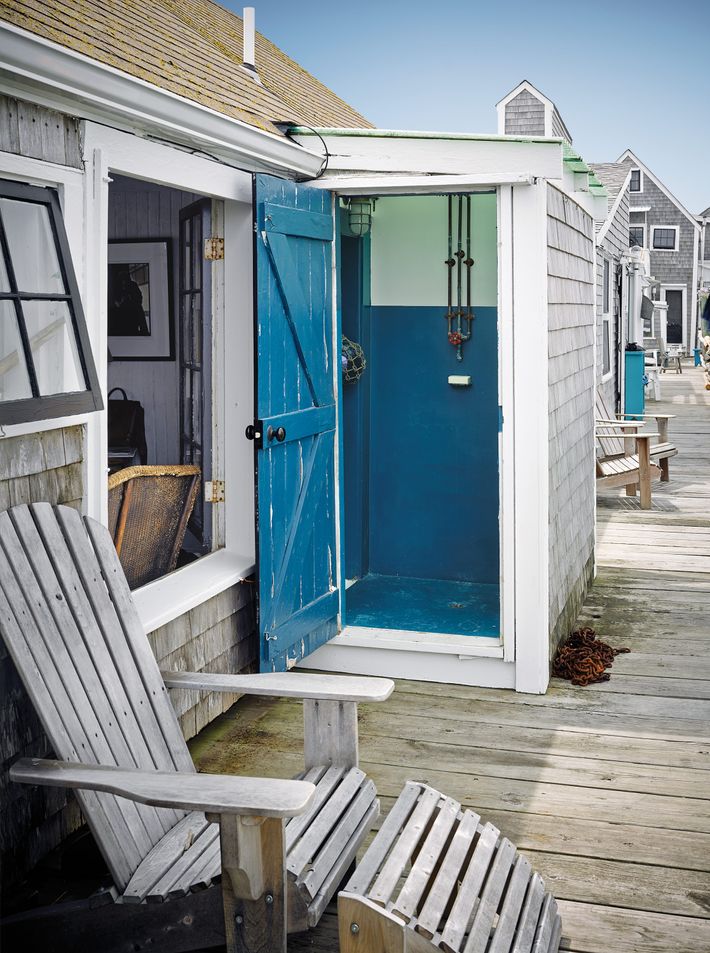 The owners gave the interior a fresh coat of blue paint. 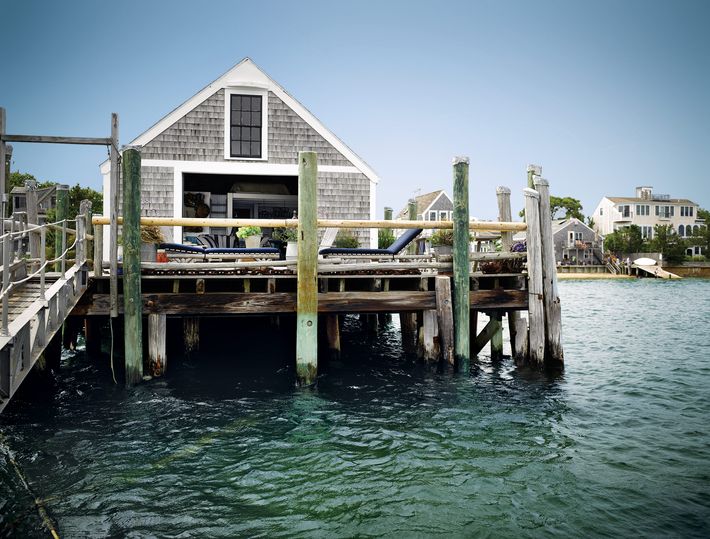 Because of the dramatic rise and fall of the tides, the cottage feels a bit like a houseboat. 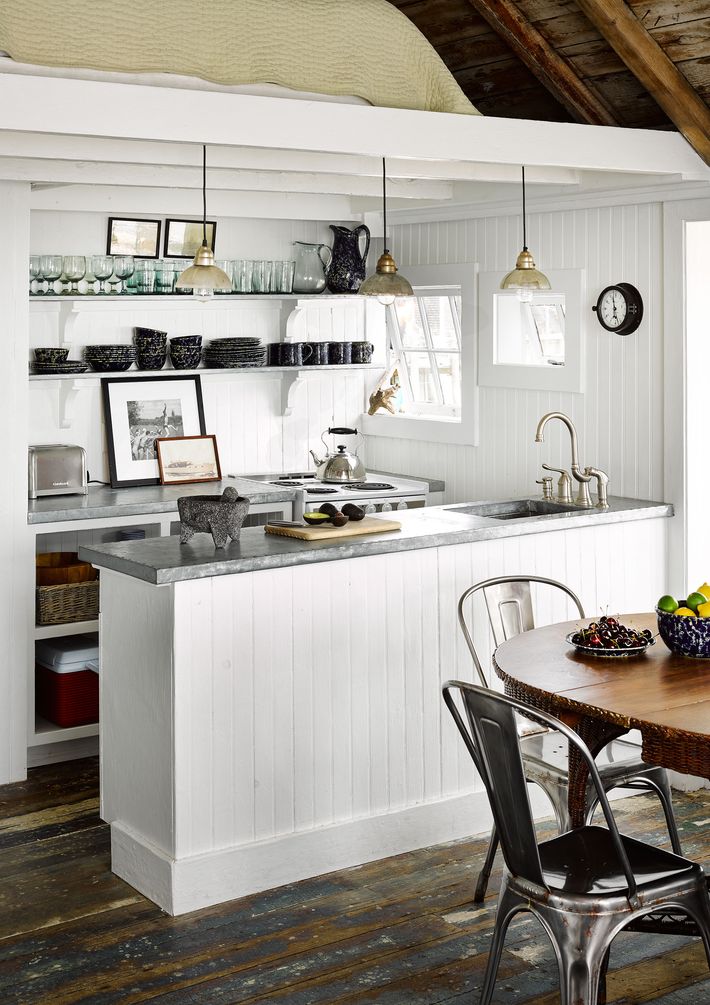 The owners installed a new kitchen with durable, metal-covered countertops. 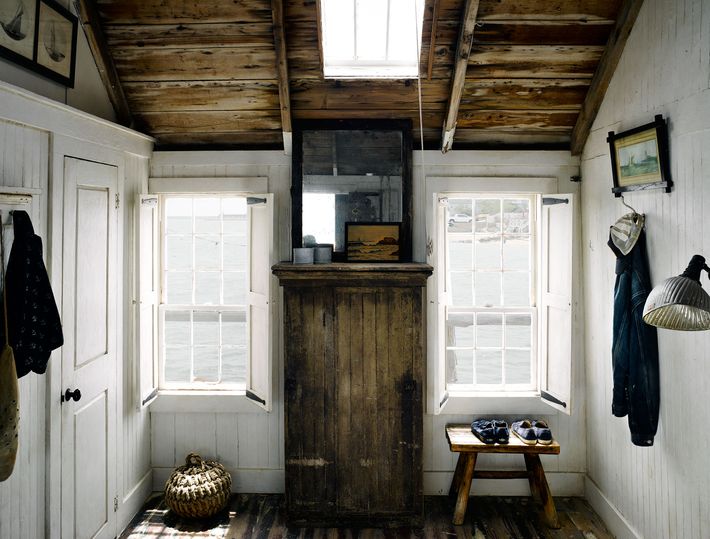 The other side of the bedroom overlooks the water and has a door leading into the bathroom on the left. 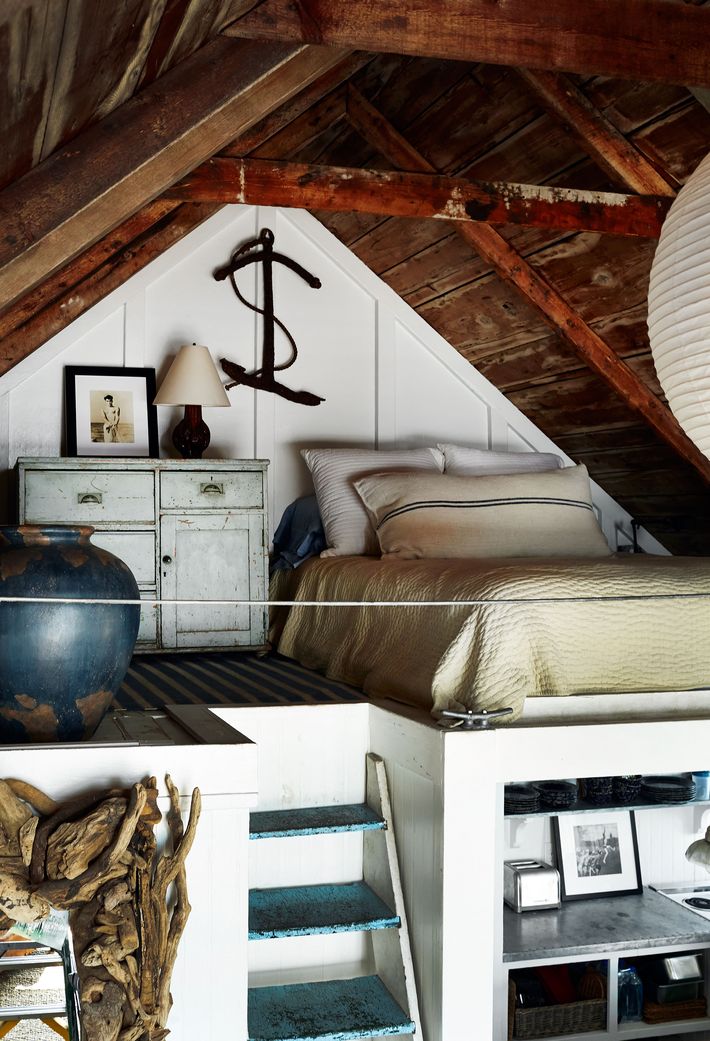 The View From the Bedroom

A view into the cozy sleeping loft for guests.

Tour a Provincetown Cabin on the Bay

oscars 5 mins ago
Gina Prince-Bythewood Weighs In on the Best Actress Debate The Woman King director called out the lack of Oscar nominations for Black women.
teens 3:06 p.m.
Leonardo DiCaprio Is Not Currently Dating a Teen Why would you think that??
goodbyes 12:30 p.m.
RIP, Stripper Web For 20 years, the forum was a haven for new dancers seeking community.
ask a boss 12:00 p.m.
How to Answer ‘Why Are You Interested in This Position?’ in a Job Interview This is usually one of the first questions asked in an interview, and you shouldn’t wing your answer.
auto-refill 11:58 a.m.
The Beauty Products Beyoncé’s Makeup Artist Sir John Uses to the Last Drop Including Barbara Sturm’s Lifting Serum, Supergoop’s Unseen Sunscreen, and SkinMedica’s TNS Serum.
grammys 2023 11:21 a.m.
Jay-Z Thinks Beyoncé Deserved Album of the Year Too In a TIDAL interview, he said that Renaissance “has inspired the world.”
action item 10:35 a.m.
How to Help the People of Turkey and Syria Two powerful earthquakes have killed more than 5,200 people.
power 8:00 a.m.
Inside the ‘Rampant Culture of Sex’ at ABC News T.J. Holmes and Amy Robach weren’t the only ones — “It felt like everybody was sleeping around,” said one former GMA staffer.
By Angelina Chapin
reality tv 7:00 a.m.
Real Housewives Helped Heather Gay Actually Get Real Her new memoir, Bad Mormon, recounts how Bravo delivered her from the church.
yikes Yesterday at 7:26 p.m.
Ashton Kutcher and Reese Witherspoon’s Awkwardness Kinda Makes Sense Even Mila Kunis noticed something off between these rom-com stars.
copenhagen fashion week Yesterday at 7:04 p.m.
9 Things I Learned at Copenhagen Fashion Week Scandinavian style and its purveyors might be onto something!
power Yesterday at 2:00 p.m.
What to Know About the Protests in Iran Since Mahsa Amini’s death, Iranian forces have killed more than 500 protesters, including women and children.
is this flirting? Yesterday at 12:58 p.m.
Divorced Dad Experiments With Thirst Traps A newly retired Tom Brady is posting mirror selfies.
brooding Yesterday at 12:00 p.m.
What If You Just Didn’t Clean That Up? Our ideas about cleanliness are stuck in the mid-20th century. Today, women can afford to care less.
By Kathryn Jezer-Morton
:( Yesterday at 11:21 a.m.
Ben Affleck Plumbs New Depths of Existential Despair Not everyone had a nice time at the Grammys, but at least one man was honest about it.
hairy situations Yesterday at 11:00 a.m.
15 Ways to Convince Your Hair to Grow Faster and Longer It’s not just a waiting game.
By Erica Smith
grammys 2023 Yesterday at 9:47 a.m.
Fans Are Still Processing That Beyoncé Snub Are Grammy voters okay?
rich people stuff Yesterday at 8:00 a.m.
The Fleishman Effect In a city of Rachels and Libbys, the FX show has some New York moms worried they’re the ones in trouble.
By Caitlin Moscatello
appointment viewing Yesterday at 8:00 a.m.
The Last of Us Is the Apocalyptic Tearjerker You Won’t Want to Miss Yes, that zombie-apocalypse show The Last Of Us is actually worth the hype.
how i get it done Yesterday at 7:00 a.m.
Misty Copeland Is Back in the Studio And preparing for her return to the stage since becoming a mother and authoring a memoir. Here, she shares how she gets it all done.
More Stories