Twitter is great at spreading information. The problem is that the platform is agnostic about the veracity of that information, and is equally eager to broadcast valid information about a recent natural disaster and invalid information about President Obama’s birthplace. Today was a really good example — a lot of people (myself included) were shocked to see reports emanating from the U.N. and The Guardian that ISIS was demanding that women in the territory it controls in Iraq undergo female genital mutilation. As it turns out, this is, thankfully, a pretty flimsy story.

There are a lot of reasons why false rumors tend to do better than debunkings, and Twitter tends to exacerbate them — the short version is that people have a lot of psychological motivation to retweet rumors that fit into their preconceived notions (ISIS is, after all, a rather barbaric group), but tend to be a lot less excited about passing around debunkings, except when the debunkings serve some psychological end (Obama ain’t a Muslim).

So how did Twitter do in this case? I ran a couple of searches to find out.

First, I entered the search terms “ISIS” and “FGM,” or female genital mutilation:

Not bad. Mostly debunky. But things weren’t as good when I entered the less fancy “ISIS” and “mutilation” combination: 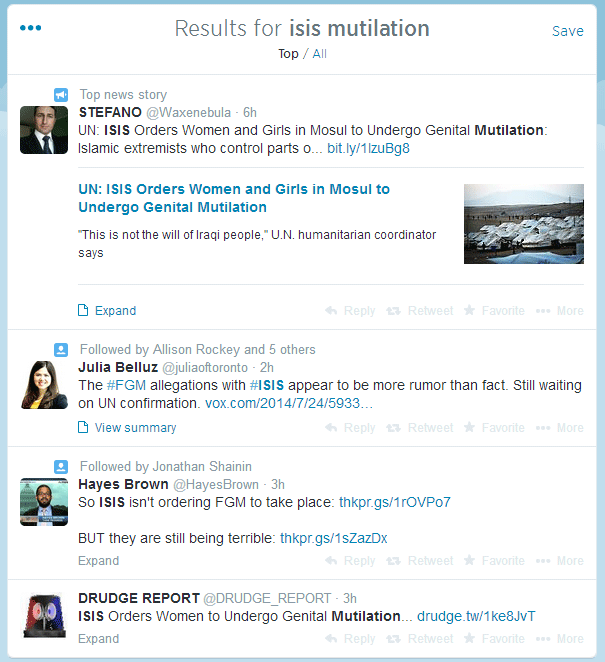 Only half the stories reflect the latest information, and one of the ones that doesn’t is tagged as “top news.”

Now, a lot of people get their Twitter news from their feeds rather than from searches, but the searches highlight some of the dangers here: Since I happen to follow a lot of journalists, and journalists tend to be good about debunking false rumors, my feed was full of those debunkings and I was unlikely to miss them.

But what if you’re not looped into those networks online? What if you’re one of the Drudge Report’s 682,000 followers, and you saw the site’s tweet spreading the rumor, which as of now hasn’t been followed by a correction or clarification? Everyone has some sort of weakness when it comes to their ability to tell a good source from a bad one, or a credible story from a false rumor. Twitter, wonderful as it can be in certain situations, doesn’t always recognize these distinctions.

reasons to love new york 8:00 a.m.
New York Attracts the World’s Most Beautiful People  The only person hotter than my doula and my barista? My mom’s doorman.
By Alyssa Shelasky
reasons to love new york 8:00 a.m.
Bossa Nova Social Club, Bushwick’s ‘Techno Cheers,’ Came Back You can’t burn down cool.
reasons to love new york 8:00 a.m.
There’s Always Room for a Few More New Yorkers Meeting asylum seekers at Port Authority.
reasons to love new york 8:00 a.m.
No Matter Where You Live, New Yorkers Can Help You Get an Abortion And we’ll pay for it, too.
alexa play 8:00 a.m.
The White Lotus Theme Song Is an Absolute Banger The only music worth listening to right now.
reasons to love new york 8:00 a.m.
How Resale Saved New York Retail Many of the most exciting and original new stores to open recently carry vintage and secondhand clothing.
By Emilia Petrarca
2022 fashion year in review 7:00 a.m.
The 32 Most Absurd Accessories of 2022 From joots to balloon shoes.
how i get it done 7:00 a.m.
How New York Times Parenting Columnist Jessica Grose Gets It Done “Raising the next generation is and should be a concern to everyone.”
astrology Yesterday at 8:30 p.m.
Madame Clairevoyant: Horoscopes for the Week of December 5 A full moon in Gemini may run amok.
By Claire Comstock-Gay
sex diaries Yesterday at 8:00 p.m.
The Vermont Woman Who Blows Off Work for a Tinder Date This week’s sex diary.
society pages Yesterday at 2:01 p.m.
Chaos Reigned at Art Basel A surge of outsize egos descended on Miami in the name of art (?) last week.
By Marlowe Granados
mom-ologues Yesterday at 10:03 a.m.
Keke Palmer Turned Her SNL Monologue Into a Pregnancy Reveal Baby, this is Keke Palmer’s baby bump.
gone sale-ing Dec. 2, 2022
10 Things You Don’t Have to Pay Full Price for This Weekend Deals from Neiman Marcus, Farfetch, Sephora and more.
art basel Dec. 2, 2022
Suchi Reddy Actually Likes Art Basel for the Art Her latest installation was inspired by the Miami clouds.
are u coming? Dec. 2, 2022
Art Basel Was Made for Madonna And I’m almost too hung-over to write this dispatch.
By Brock Colyar
5 questions with... Dec. 2, 2022
Meet the Black Woman Who Built a 15-Year-Old Fashion Business Sherri McMullen’s Oakland luxury store is one of a kind. Here’s how she did it.
art basel Dec. 2, 2022
Pharrell, Gigi Hadid, and More of the Bestest Party Pics This Week Celebrating with Fendi, Saint Laurent, and more.
uvalde Dec. 2, 2022
What We Know About the Police Response to the Uvalde Shooting A class-action lawsuit by survivors against law enforcement asks $27 billion for “indelible and forever-lasting trauma.”
celebrity couples Dec. 2, 2022
Finally, the Good Morning America Romance We Deserve Amy Robach and T.J. Holmes are now New York royalty.
friday sales Dec. 2, 2022
22 Things on Sale You’ll Actually Want to Buy: From Alex Mill to Star Wars And a flower-shaped cat fountain that Strategist readers love.
More Stories