I am sitting in a restaurant tucked away on a quiet street in Tribeca, stabbing at overpriced Brussel sprouts with a neon green “smart fork” approximately four times the size of a regular fork. Bankers in cuff links have already gathered around the bar, their voices inching closer to maximum douche level with every Negroni, and I am trying to do my best impression of a normal human, pretending that using a comically oversize utensil to hoover vegetables into my mouth is a thing I totally do on the reg.

As I raise the fork to my mouth to deliver another Brussel sprout, it starts to violently vibrate, and I almost drop it on the table. The hostess eyes me suspiciously.

“That thing really needs to respect your journey,” my friend says from across the table as he happily cuts into his duck breast. He is eating with a regular fork, one that is not sending data about every bite he takes back to an app. For one dark, fleeting moment, I want to stab him with it.

The devil fork is called the HAPIfork, but I immediately slip into calling it the “food-shaming fork,” and the name sticks. The moniker isn’t really fair — the fork doesn’t actually take into account what type of food you’re eating. Instead, it measures how quickly you eat, and zaps you with a Pavlovian vibration if you don’t take enough time between bites. It’s supposed to train you to eat slower, which studies have shown can help you feel fuller sooner, thus leading to weight loss. (This effect generally takes about 20 minutes.)

The HAPIfork is one of many tech products on the market aimed at people who want to lose weight, stay fit, or narcissistically track every single thing they do in an OCD-friendly spreadsheet. Launched at CES in January 2013, the utensil attracted widespread derision outside of tech circles before going on to raise $134,743 on Kickstarter. AllThingsD disparaged it as a tool for solving a first world problem, and Stephen Colbert even gave the HAPIfork a wag of the finger on an episode of his show that aired during CES.

The controversial utensil is the quantified self movement’s logical conclusion. Propped up by a segment of Silicon Valley obsessed with building products that enable us to quantify, track, and analyze every aspect of ourselves, apps like MyFitnessPal, a calorie-counter, and wearables like the Jawbone UP, an activity tracker, force accountability on the lazy — or at least try to. The quantified self’s growing popularity stems from a shared belief in the Valley that data determines everything: Any problem can be solved, as long as you gather enough data to solve it. And how comforting that must be for many, to feel you’ve succeeded in imposing order among chaos.

Of course, there’s a point where self-quantifying stops being helpful and starts being ridiculous. Where, exactly, is that point, and which side of the line does the HAPIfork fall on? I was about to find out.

The first time I use the food-shaming fork, I am sitting at my desk hate-reading a lady blog and eating a sad salad. I had my boyfriend set up the HAPIfork software for me the night before, because frankly it seemed kind of complicated and I didn’t feel like doing it. The fork can be placed into three modes based on how you eat: Picker, for people who pierce their food with the fork; Scooper, for people who use the fork like a spoon; and Data Lover, the most sensitive mode. We chose Picker. He also set the fork to vibrate at a strong level if I took less than ten seconds between bites.

Perhaps because I’m taking the time to respond to Slack chats or tweet inane observations between bites, the HAPIfork only vibrates a handful of times to tell me I’m eating too fast. I consider this a great success. I still housed my entire lunch.

My second and third days, I only manage to use it for one meal, a Seamless order of Chinese food I consume while watching the Real Housewives of New York finale. Plus, there’s that whole taking it apart and washing it after every meal thing, which honestly is a huge burden.

A friend eyes me suspiciously across the table as I retrieve the food-shaming fork from its plastic prison after a big bowl of steamed spinach and kale arrives. I’m starting to get a little frayed. I already use MyFitnessPal daily to monitor my caloric intake, and I use the Jawbone UP to track my steps to make sure I’m getting enough exercise during the week. Combined, they’ve begun to magically form the Three Musketeers of “Can U Not?” injecting intense bouts of shame into everyday activities.

I was starting to think hanging out with my grandmother would be a lot easier.

After I finish eating — two chicken wings, some Brussel sprouts, and the spinach-kale combo — I mutter dejectedly, “I’m still hungry.” HAPIfork recommends using the fork 60 to 75 times during meals lasting 20 to 30 minutes, but clearly I’m doing something wrong, because according to the data I use it 40 times in an almost 50-minute meal, which amounts to a 75 percent success rate.

“Duh,” my friend shoots back. “You ate basically nothing with an anorexic fork.” 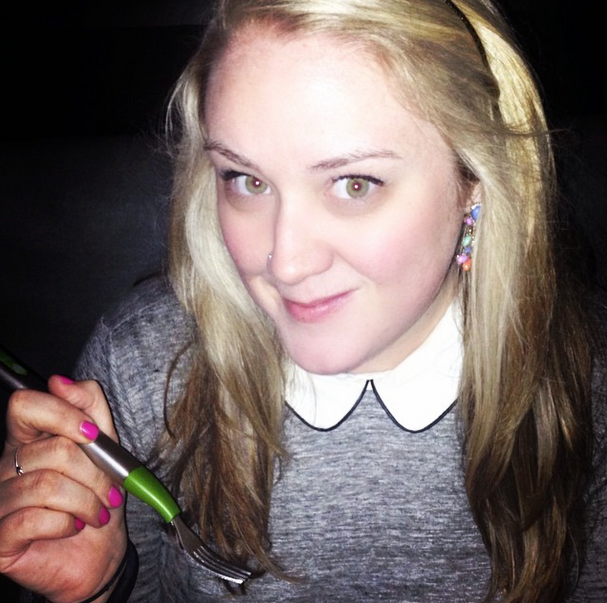 I think I’m starting to subconsciously gravitate toward foods that need to be eaten with spoons so I can avoid the guilt induced by the food-shaming fork. Though HAPIfork doesn’t come in spoon-form yet, research has shown that eating with a smaller spoon can help people eat less. I use a small spoon to eat oatmeal for breakfast, and soup for lunch. Being so mindful is getting kind of exhausting.

For dinner, I give in and eat chicken and rice with the fork while catching up with the Kardashians. I look down at the fork and think for one bleak moment, “Always the Rob, and never the Kim.” On the next bite, it vibrates and the light angrily flashes red. I think it’s becoming sentient.

Another sad desk salad, another day using a gigantic fork to stab at some soggy broccoli. I actually do think I’m learning to eat slower. Still, the fork’s measurements seem so off — completely missing when I sneak fast bites, and zapping me when I haven’t even taken a bite at all — that I don’t know who to trust anymore. It’s also taken this long for me to realize that you’re not supposed to use a metal knife with the HAPIfork because — I convince myself — it will electrocute you. (It will not, I learn, upon floating this worry by my electrical engineer boyfriend, it’ll simply make the data less accurate.)

The last meal I eat with the food-shaming fork is a breakfast of scrambled eggs and feta. On the last day, while out to dinner at another restaraunt in Tribeca, I force my friend to use it. “It’s for a story!” I reassure him, as I remove the cumbersome fork from its plastic carrying case and haphazardly clean it off with seltzer water. He’s the kind of person who has a Citibike membership, so of course he’s mastered slow eating. The fork barely zaps him at all. It’s no surprise by this point that research has found people who eat faster are more likely to be overweight, and healthy people have a tendency to eat much slower. I almost let him keep the fork, since they clearly get along better than we do.

On the last day, I use a micro USB cable to upload all of my data to the HAPIfork app so I can see how I did. The answer is: not that bad! Or this is just part of Silicon Valley’s endless quest to delight and encourage me.

I have an average success rate of 85 percent, which means the fork only had to yell at me for eating too fast 15 percent of the time. (Strange, ‘cause it seemed like a lot more than that.) I consider this a great success, and so does the HAPIfork dashboard, which says it’s “HAPI for me” because I’m “doing well.”

Perhaps, I learn, I was never as fast an eater as I thought — a fact that would’ve been disappointing to discover had I actually shelled out $100 for this thing. Or maybe the very act of eating with a heavy electric fork in public made me automatically more mindful of my habits. Still, after using it for a week, the HAPIfork strikes me as one step too far in a quest for the quantified self: There are some things, it turns out, I just don’t need quantified. At least it’s not as bad as the app that measures how loud you get during sex.