“I wish I could have you layin’ on me while I sweat” is just one of almost 2,000 comments that the actor Michael B. Jordan received on his Instagram after asking his followers to reveal their temptations. The 27-year-old actor is the new face of Axe’s fragrance, Gold Temptation, and is co-directing a video for the brand to be premiered next month. Although he tamely shared on Instagram that cookies are his biggest temptation, the Cut spoke with him about the lure of some other temptations. Namely, baby feet, bubble wrap, and how he responds on Instagram to women who offer to be his baby momma.

You’re co-directing the video for this [Axe’s Gold Temptation]? What’s the concept?
Sometimes, when you’re in the elevator and you see someone coming — it’s like, Do I hit the door closed or do I not? At a yellow light: Do I take it, or do I not? Bubble wrap: I know when I see bubble wrap I go crazy. I have to pop it. We’re playing off of different temptations, and riffing on how we came to the Axe Gold Temptation. It’s about different social experiments and trying to figure out what tempts men and women to help us become better acquainted with each other.

How do you pick your scent? How do you know what you want to smell like?
Sometimes, I pick out my own. I make a bold decision and pick what smells good to me. Or, I’ll go with a ladyfriend and hear her thoughts and opinions on it because at the end of the day we smell good for us, but we really like to smell good for women.

What do you think girls want guys to smell like?
Ah, I think it’s like a personal thing. To each his own. Actually, I think baby feet smell amazing. Newborn babies? They smell amazing. Their hair. There’s something about the smell.

So, would you want to smell like baby feet?
No, no. I can’t even grow a beard; I’m trying to get into the manhood. 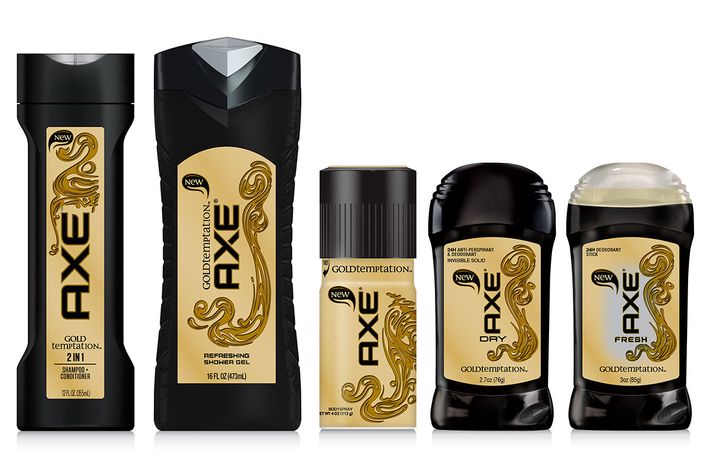 You’re promoting #TemptationTuesdays on Instagram. What are some of your other temptations?
Sneakers or shoes. I have probably well over 400 or 500 pairs of sneakers. And jackets; I’m a clothes guy. I’m a foodie. My mom and dad, they cater, so I grew up in the kitchen. And things that go fast. I’m a bit of an adrenaline junkie. I like cars, motorcycles, skydiving, surfing, and stuff like that.

Some of the comments on your #TemptationTuesdays post were interesting.
That’s a good choice of words. I knew when I put that video up that I was opening a can of worms as far as what people would write. I have a lot of women followers. So when I posted “What’s Your Temptation?” they were automatically like, You! Let me have your kids! The comments are usually the funniest thing that you can find because you can really just say anything you want; they don’t really expect a reply. Most of them were that [interesting] though.

What was the first scent you purchased?
It’s was Jean Paul Gaultier, I forgot what the name of it is. But: The bottle with the man on it with the stripes. I probably got the most compliments from that fragrance. My best friend’s older brother had [the fragrance], and I was over there getting ready to go out. I tried it on and was like, This is awesome. I’m pretty sure I took it. I bought him another one, I did.

Do you wear Gold Temptation now?
Uh, yes. I shower with it a lot, more than I thought I would. Stuff in the past from Axe wasn’t my thing for the most part, but this one is something I can walk around with and get a lot of compliments from.

Have any of the things from the commercials happened to you?
Unfortunately, none. I’m a little let down to be honest.

How do you feel about being apart of a brand that’s kind of cheesy but also a huge men’s brand?
I started out in this industry, modeling and stuff. when I was 11 or 12. I remember my mom taking me to auditions when I was really young. Now, 15 years later, to somehow be associated with a brand and representing them is, like, mind-blowing to me. It just shows growth. It’s pretty cool to see your dreams come true before your eyes. It’s awesome. Like Axe, that’s pretty big.

Michael B. Jordan on Baby Feet and Bubble Wrap