A week on, we still don’t know the precise circumstances of Michael Brown’s death — what happened in the three minutes between when an officer told him to quit jaywalking and when an officer shot him at least six times, including through the top of his skull. But whatever happened, Michael Brown has become an emblem of the violence experienced by black Americans, a horrible reminder of a longtime and often overlooked truth.

That is that black people are and long have been the disproportionate victims of crime in America. The black homicide death rate has declined significantly over the past 20 years, as the country has broadly become safer and safer. Nevertheless, black people make up 55 percent of firearm homicide victims, even though they are only 13 percent of the population. The homicide statistics are especially stark when contrasted with the statistics on suicide, the country’s other major source of gun deaths. According to a Washington Post analysis, a white person is five times more likely to commit suicide with a gun than to be shot with a gun, whereas a black person is five times more likely to get shot than to commit suicide with a firearm.

Some of these crimes come at the hands of police. Black people are more likely to be victims of police brutality, and a black person under arrest is much more likely to be killed than a white person under arrest. Stories of unfair police treatment, combined with overwhelming evidence of racial discrepancies in just about every facet of the justice system, have led to a toxic culture of distrust between black Americans and the police.

Figures released by Pew almost exactly a year ago show a stark divide along racial lines: 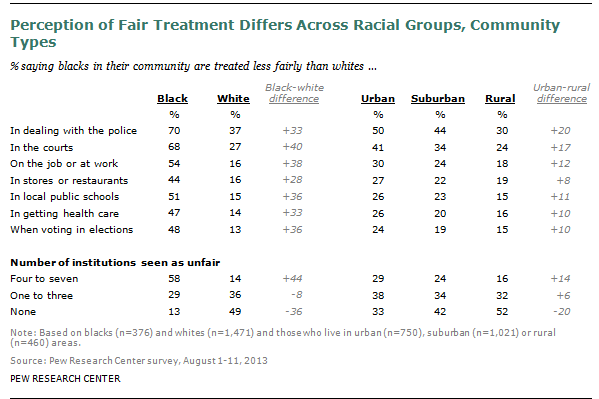 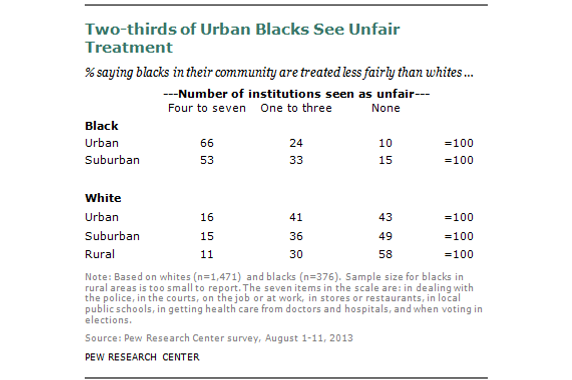 The idea of “two Americas” is a cliché by now, but here it’s apt. White Americans are much less likely to be the victim of a crime, and much more likely to trust the police to act on their behalf when they are. Black Americans, who are on average much more likely to require police assistance than whites, often don’t trust that when officers arrive, they will be a helpful presence. This lack of trust can erode a nation’s basic functions. Judith Levine, a sociologist at Temple, has researched trust in the context of low-income women, and she makes a strong case that when people don’t trust institutions, it makes it a lot harder for those institutions to do their jobs, even when they have the best intentions.

There is a lot of nuance to all this, of course, and there are many, many reasons why black communities bear a disproportionate burden of crime, and why trust of police is sometimes so low in these communities. Nevertheless, the disproportionate amount of victimization and distrust among black Americans too often gets overlooked, and gives some context for the anger and sadness over the all-too-common deaths of people like Michael Brown, Jonathan Ferrell, Renisha McBride, Eric Garner, Trayvon Martin, and so many others.

A Huge Racial Divide on Crime and Trust