One day, after spending hours trying on bras at a department store, Michelle Lam finally had enough. Nothing fit. “The experience was so miserable. I developed body dysmorphia all of a sudden,” says the co-founder of True&Co., her science-meets-design bra store. In the weeks after, ultimately emboldened by her experience, she had to do something. So the enterprising Lam decided she needed to, as she puts it, “figure out if there is an algorithm for your boobs.”

As it turns out, there wasn’t—so she decided to create one. Any woman who enters True&Co.’s site is asked to take a confidential survey, which Lam created after observing a host of expert, old-school bra fitters. She and an early tech team used these findings to create the first algorithm, which they continually evolve based on customer feedback.

“From that quiz, we’ve identified 6,000 different body types!” marvels Lam. (The former finance whiz left her East Coast job at Bain Capital Ventures to move, jobless, with her husband to San Francisco, where she founded the company.) “Most bras are made to fit breasts with a full curvature. That’s only 28 percent of women.” 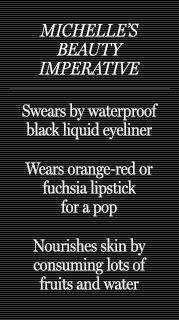 “If you look at the intimate-apparel industry,” she adds, “most of it is led by the gender that does not wear the product.” But on her site, the lingerie offerings—which include True&Co.’s original designs—evolves with these statistical findings. To date, more than 500,000 women have come to True&Co. for this expertise.

As Lam can attest, a comfy bra can have an uplifting effect on how you present yourself, even on top of your intimate apparel. “When I worked in conservative, male-dominated industries, I had an entire closet of black dresses,” she explains. “Now that I’m in a more creative place, I’ve really expanded my color vocabulary. I’m stepping up that risk-taking element.”

The Technophile Who Started a Bra Revolution

do i need this? 1:00 p.m.
The Dapper Dan x GAP Hoodie Collab Is Back To celebrate the Harlem legend’s birthday, Gap surprised customers with a new drop of the coveted hoodie.
brooding 12:31 p.m.
Sleepover Kits Are About Making Content, Not Playing Pretend Kids don’t need to glamp.
By Kathryn Jezer-Morton
are u coming? 12:12 p.m.
Straight-Boy Swooning Over the East Villains TikTok Crew Guess which one’s nickname is “Phantom Smoocher”?
By Brock Colyar
5 questions with... 11:04 a.m.
Tonya Lewis Lee Spotlights the Black Maternal-Health Crisis in Aftershock The documentary’s co-director explores health advocacy through art.
climate change 10:01 a.m.
What to Know About the New Climate Deal The Senate just passed the country’s most ambitious climate legislation to date.
lies 9:53 a.m.
Alex Jones Owes Over $49 Million for His Sandy Hook Lies After a jury ordered him to pay one victim’s parents $45.2 million in punitive damages.
how i get it done 7:00 a.m.
Sounds Like Working at LEGO HQ Is As Fun As You’d Imagine “We have LEGO bricks in every conference room. It’s encouraged in meetings that we make playful games.”
By Olivia Luppino
astrology Yesterday at 8:30 p.m.
Madame Clairevoyant: Horoscopes for the Week of August 8 On Thursday night, a full moon in Aquarius ignites your rebelliousness.
By Claire Comstock-Gay
sex diaries Yesterday at 8:00 p.m.
The Grad Student Who Meets Someone on Facebook Marketplace This week’s sex diary.
ugh why Yesterday at 6:19 p.m.
Kevin Federline Has Some Issues With Britney Spears’s Instagram Spears responded, calling his statements “hurtful.”
celebrity Yesterday at 3:33 p.m.
Kardashian News Drop: A Baby and a Breakup Khloé Kardashian welcomes another baby as Kim Kardashian and Pete Davidson reportedly break up.
celebrity Yesterday at 12:41 p.m.
Kim Kardashian Reportedly Resigned As Queen of Staten Island Her nine-month relationship with Pete Davidson is allegedly done.
backlash Aug. 5, 2022
What Is Going On With Jackie Aina? Her latest Forvr Mood collection was supposed to be an ode to Nigerian culture. Some fans aren’t sold.
celebrity beauty encyclopedia Aug. 5, 2022
An Encyclopedia of Celebrity Beauty Brands Here are over 60 products that famous people have made for your face.
By Daise Bedolla, Kathleen Hou, and Erica Smith
friday sales Aug. 5, 2022
20 Things on Sale You’ll Definitely Want to Buy: From Everlane to Patagonia Including two deals exclusively for Strategist readers.
parties! Aug. 5, 2022
Karen Pittman, Naomi Watts, and More of the Bestest Party Pics From the Week All of our favorite looks to kick off August.
hairy situations Aug. 5, 2022
Doja Cat Doesn’t Think Hair Is ‘Cool’ So she shaved it all off — in front of her followers.
much to think about Aug. 5, 2022
Big Sean Vexed by Big Questions Science has confirmed what the rapper has long sensed is true: Earth’s rotation is speeding up.
fashion Aug. 5, 2022
Want Design Porn? Go to Shelter Island, Ask for Louis Vuitton. A pop-up showcasing the brand’s finest classic bags, furniture, and décor is summering on the island.
always shopping Aug. 5, 2022
21 Leggings for Any Type of Workout Because leggings can make or break a workout.
By Bianca Nieves and Anne Cruz
More Stories