VH1 really likes to drive home its belief that this show is a “radical dating experiment.”  At every introduction, the host asks: Will people put everything — from genitals to bad tattoos to glaring personality flaws — out there for judgment? On last night’s episode, we finally got an answer in the form of Katie, who is the living embodiment of all VH1’s radical ambitions, the show’s raison d’etre. From her first moment, Katie lets that freak flag fly higher than any other. She’s never met an inhibition she didn’t release to the wind. This is the reason this show exists: so wildcard Katie can go freaking nuts.

But first, let’s meet last night’s lovelorn hopefuls: Diane, who seems plain old pretty nice and really normal. Her partner is Keegan. He’s shy and muscly, and readily admits that he would marry and impregnate a girl he met on the show. Other than that, he’s also quite normal. Just two norms, going on their naked date.

Date 1:
When Keegan and Diane first greet each other nude it’s like the prom king and queen meeting to devirginize each other. It is so awkward. Keegan even says awkward things like, “If I get turned on during this date, it could get awkward.” I suppose VH1 figures if these two norms can survive this level of awkwardness, they can survive anything, including spearfishing while naked. Great idea! Let’s all take sharp three-pronged spears and jab them at things floating in murky water. Keegan’s catch of the day is woefully small, and he says sadly, “He looked bigger under there, didn’t he?” The guppy does its best to serve as a vessel for all his projected insecurities. 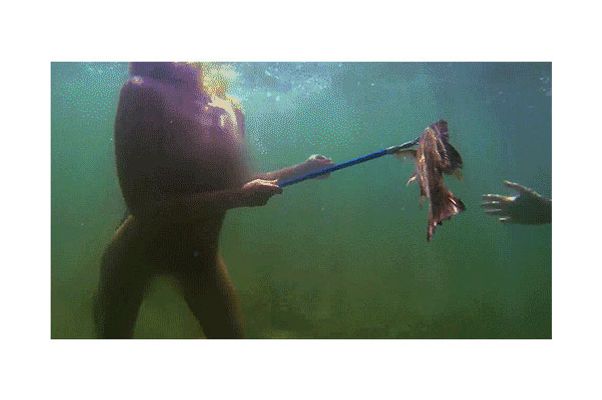 “Shy” Keegan reveals that he is actually so shy he can’t really carry on a conversation. The pair sit there totally nude, the silence punctuated only by Diane’s strained conversation-starters, i.e., “Oh, is your mom German?” Then they both give up and go straight to bed, hoping for a better tomorrow.  It just goes to show: You can put two people in a room and take away their clothes, but you can’t make them appreciate it. 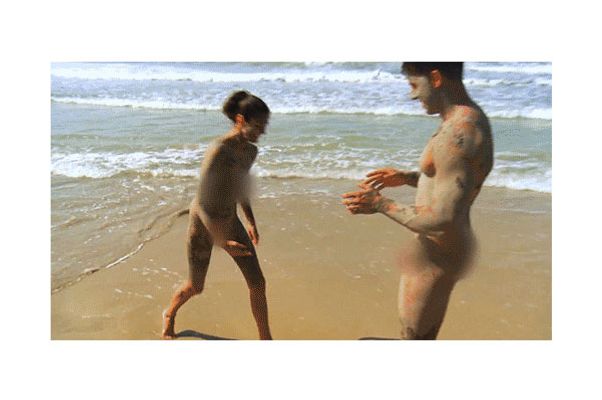 Meanwhile, if Keegan is Captain Taciturn, Diane’s date Dan is his polar opposite. In 30 seconds he reveals that he’s never had a girlfriend, never had a drink, kissed his first girl at 19, lost his virginity at 24, and went on a really bad trip to Disney World once. I fell into a deep hypnosis listening to him talk and talk while stress hives slowly crept up his back. When I came to, it seemed Diane surprised us all. She was totally into it. She was receptive to his personality — not his looks, though, definitely not his looks. It’s a powerful lesson in values. And it looks like Dan is finally going to kiss another girl!

Diane is still kind of mooning over skinny, nerdy Dan. Then she meets Scott, a manly man who tickles all of her primal urges. He goes right in for the hug, attempting to dick-poke her because that’s went men do. He also uses the phrase “rock out with my cock out” and has a terrible ankh tattoo on his sternum. I don’t get Scott’s appeal, but they circle each other for a bit, check out each other’s butts and decide to be in love. 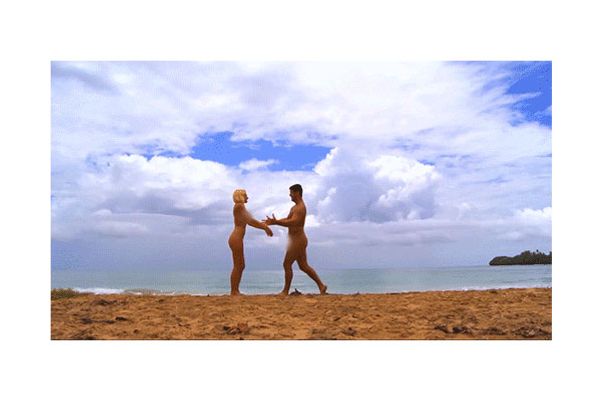 Finally, Dating Naked delivers on two promises: naked ziplining and foul-mouthed Katie. Katie is from Queens, curses like a sailor, and talks about her vagina. She’s just your typical woman on the hunt for her “ride-or-die guy.” Keegan tries to run from her, but Katie came to this tropical island to wrap her bare legs around someone on a tandem zipline. She gets her wish. They strap into the harness and meld together into one flying naked blur. It’s thrilling! Until someone forgets to pull the handbrake and Katie’s face slams into the stopping block. Ladies and gentleman, our first naked injury! Luckily, the producers let you put your clothes on to go to the hospital. 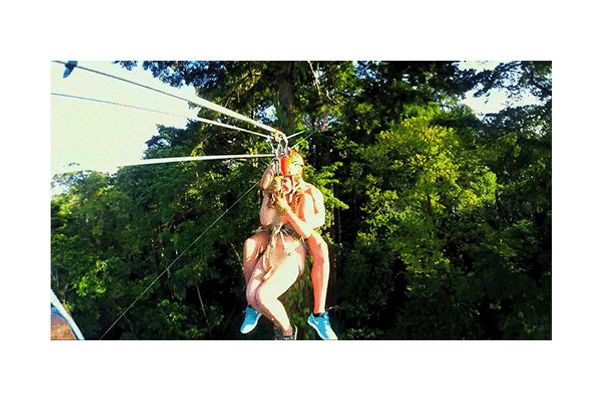 In the end, however, the rules of heartwarming teen movies prevail: the Prom Queen choses the nerd. Diane goes with Dan, even though he was way too invested — but who cares, she won’t return his texts anyway. Keegan chooses Jesse instead of Katie. And Katie — well, Katie goes off in a glorious rant. All those bleeps and blurs cannot hide her hurt feelings. She’s stripped of clothing, blacked of eye, waving her middle fingers to the sky — “F*CK YOU VH1! Take your picture, bitches!” And we did: 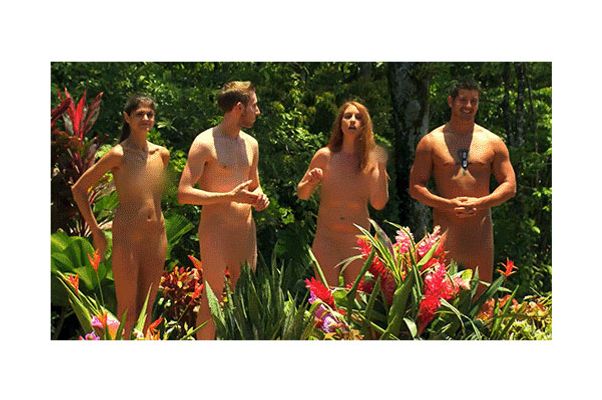 Most awkward naked activity of the episode: Failed naked paddleboarding: 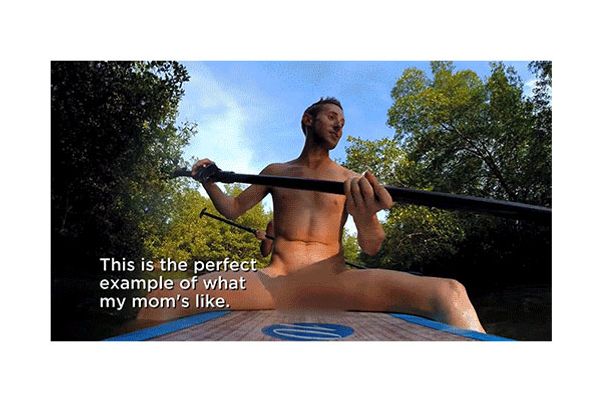 There Has Finally Been a Boner on Dating Naked

burnout 7 mins ago
When to Just Quit Already How to figure out it’s time to move on — and be okay with it.
what we know 3:02 p.m.
Texas Officials Acknowledge Botched Police Response to School Shooting The local police chief in charge delayed confronting the gunman — while kids trapped inside the classroom repeatedly called 911 asking for help.
uvalde 2:40 p.m.
What We Know About the Police Response to the Uvalde Shooting Authorities have now said that not breaching the classroom the shooter occupied for more than an hour was “the wrong decision.”
obsessive tester 2:24 p.m.
I’m On the Hunt for the Best Sunscreens Without a White Cast These are my current favorites.
gone sale-ing 2:10 p.m.
I Didn’t Know Luxury Until I Got These Linen Sheets And they are currently 15 percent off.
q&a 2:00 p.m.
Is Somewhere Good the Future of Social Media? We spoke to Annika Hansteen-Izora, the designer of the app, about slowing down and truly connecting.
as told to 1:48 p.m.
How Teachers Talked About Uvalde With Their Students After the Texas school shooting, educators share their fears and frustrations.
By Bindu Bansinath
style 1:41 p.m.
The Best Looks From the Cannes Film Festival All hail the ball gown.
action item 1:15 p.m.
How to Help the Uvalde Community From supporting Robb Elementary School families to pressing for gun-control legislation.
gun control 1:06 p.m.
Jacinda Ardern’s Commencement Speech Could Not Be Timelier “We knew we needed significant gun reform, and so that is what we did,” New Zealand’s prime minister said.
q & a 12:36 p.m.
Meet Koa, the Beauty Brand Celebrating Hawaiian Culture The company is making it a priority to share the culture of Hawaii with the world.
celebrity 12:27 p.m.
Another Celeb Has Shared Their Thoughts on Depp v. Heard Dominic Fike said during a performance that he has “visions” of Amber Heard “beating me up.”
gun violence 12:24 p.m.
The Supreme Court May Be About to Expand Gun Rights Even More In June, the Court could rule New York’s concealed-carry-license regulations unconstitutional.
i tried it 12:00 p.m.
Can Reciting a Daily Mantra Make You Treat Yourself Better? For weeks, I’ve been repeating kind messages to my reflection.
father's day 10:28 a.m.
What Our Editors Are Gifting Their Dads Spoiler warning for Cut dads.
gun control 9:45 a.m.
The NRA Will Still Hold Its Conference in Texas This Weekend Ironically, attendees will not be allowed to bring guns to the event.
health 8:49 a.m.
The Baby-Formula Shortage Won’t Get Better Anytime Soon FDA commissioner Dr. Robert M. Califf said that shelves should be restocked by late July.
encounter 8:00 a.m.
The Hostess Who Kept Their Secret Grace Faison — the 97-year-old Brooklyn Heights fixture — opens up about secretly housing women seeking illegal abortions in the late ’60s.
By Eliza Gray
lawsuits Yesterday at 6:30 p.m.
Amber Heard Says Her Defamation Trial Is ‘Humiliating’ and ‘Painful’ On the last day of testimony, Heard again denied claims from Team Depp that she lied and falsified evidence.
uvalde Yesterday at 6:27 p.m.
‘As Teachers, We’re Expected to Put Our Lives on the Line’ An educator near Uvalde feels the weight of the Texas school shooting.
More Stories