We usually associate improved cardiac health with things like exercising more or eating better, but a recent paper in Brain Stimulation suggests a new way to keep hearts ticking safely: a noninvasive device that clips onto a patient’s ear. The researchers, a team from the University of Leeds, tested the effects of a TENS (transcutaneous electrical nerve stimulation) machine, which elicits a tickling sensation, on healthy patients.

TENS machines are commonly used to relieve labor pains, so this was a novel use of them. The press release explains the device’s effects:

Lead researcher Dr Jennifer Clancy, of the University of Leeds’ School of Biomedical Sciences, said: “The first positive effect we observed was increased variability in subjects’ heartbeats. A healthy heart does not beat like a metronome. It is continually interacting with its environment — getting a little bit faster or a bit slower depending on the demands on it. An unhealthy heart is more like a machine constantly banging out the same beat. We found that when you stimulate this nerve you get about a 20% increase in heart rate variability.”

Dr Clancy said: “We measured the nerve activity directly and found that it reduced by about 50% when we stimulated the ear. This is important because if you have heart disease or heart failure, you tend to have increased sympathetic activity. This drives your heart to work hard, constricts your arteries and causes damage. A lot of treatments for heart failure try to stop that sympathetic activity — beta-blockers, for instance, block the action of the hormones that implement these signals. Using the TENS, we saw a reduction of the nervous activity itself.”

This potential treatment is a form of vagus nerve stimulation (VNS), which is most commonly used for treatment-resistant epilepsy and depression. Generally, VNS has required surgical implantation of both an electrode and a generator to provide power, and the paper’s researchers write that this could be one reason VNS, despite showing promise for a range of other conditions, hasn’t been more widely tested. The TENS-plus-VNS combination could allow for a much easier way to deliver these sorts of treatments.

A diagram released by the researchers shows how it all works: 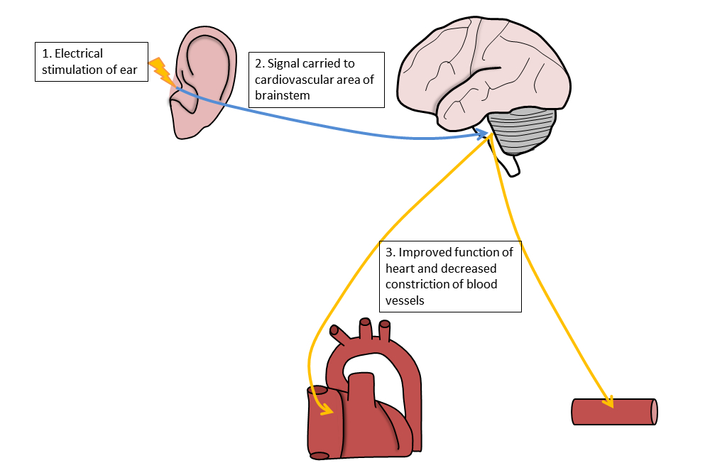 intimacy coordinators 1:17 p.m.
Amanda Seyfried Reflects on Feeling Pressured Into Nude Scenes “I didn’t want to upset anybody, and I wanted to keep my job.”
??? 12:12 p.m.
Prince William Apparently Has Another Sexy Nickname In addition to the “Prince of Pegging,” of course.
parenthood 12:05 p.m.
Mindy Kaling Does Not Care Who You Think Her Kids’ Father Is Apparently, speculation that it’s B.J. Novak doesn’t bother her.
sobriety 12:00 p.m.
‘Can I Stay Sober Without Counting the Days Since My Last Drink?’ If adding up the days one by one makes you feel bad, rethink the math.
By Ana Marie Cox
life after roe 11:20 a.m.
Mom and Teen Daughter Accused of Illegal Abortion Based on Facebook Messages Police obtained Facebook messages in which they discussed ending the then-17-year-old’s pregnancy with pills.
encounter 10:00 a.m.
Abbi Jacobson Knows the Pressure Is On A League of Their Own, her first big project since Broad City, premieres this Friday.
By Katie Heaney
celebrity Yesterday at 2:29 p.m.
Has Camila Cabello Moved on With a Dating-App Founder? She was recently seen holding hands with Lox Club founder Austin Kevitch.
culture Yesterday at 1:10 p.m.
How Jennette McCurdy Survived Child Stardom — and Her Mother She spoke with the Cut about her memoir, her mother’s abuse, and finding solace in Disneyland.
fashion Yesterday at 12:23 p.m.
Japanese Designer Issey Miyake Has Died at 84 Known for his innovative Pleats Please collections, Miyake was a fashion innovator for five decades.
ask a boss Yesterday at 12:00 p.m.
‘I’ve Been Overworked for Months and My Manager Won’t Help’ You need to be less invested in keeping your office running smoothly.
the bachelorette Yesterday at 11:51 a.m.
So, Who’s Going to Win The Bachelorette(s)’? Mid-season front-runners have emerged.
goat Yesterday at 11:49 a.m.
Serena Williams Announces Her Retirement From Tennis In a Vogue essay, she says she plans to step away from the sport after the U.S. Open wraps next month.
gone sale-ing Yesterday at 11:21 a.m.
Restock Your Fall Beauty Lineup During Dermstore’s Anniversary Sale These fall faves will keep your skin glowing like it’s summer.
all of the lights Yesterday at 11:00 a.m.
11 Light-Therapy Masks That Will Make Your Skin Glow Even after you take them off.
celebrity Yesterday at 10:20 a.m.
Did Rita Ora and Taika Waititi Secretly Get Married? Reports of an intimate London wedding have emerged after they were spotted wearing matching rings in Paris.
allegations Yesterday at 9:40 a.m.
All the Allegations Against Ezra Miller The actor has been charged with felony burglary in Stamford, Vermont.
accidents Aug. 8, 2022
Anne Heche in ‘Extreme Critical Condition’ Following Car Crash According to a representative, she has remained in a coma since shortly after the accident.
crime Aug. 8, 2022
Everything to Know About the Ahmaud Arbery Murder Case Travis and Gregory McMichael have received second life sentences for federal hate-crime charges.
celebrity Aug. 8, 2022
Olivia Newton-John Has Died Her Grease co-star John Travolta paid tribute to the actor on Instagram.
crime Aug. 8, 2022
What We Know About the Disappearance of Gabby Petito Her parents are now suing Brian Laundrie’s parents and the Moab, Utah, police.
More Stories