Late last week, St. Louis County police officer Dan Page, who gained notoriety for pushing Don Lemon during a live CNN shot in Ferguson, was suspended after his bosses became aware of an hour-long address he recently gave to the Oath Keepers of St. Louis and St. Charles, a branch of a far-right organization composed mostly of military and law-enforcement personnel worried about encroaching government “tyranny.” It’s a rambling, incoherent, overlong address — and you should probably watch it.

The video, which appears to have been shot in April, is basically a Greatest Hits of recent (and not so recent) far-right conspiracy theories. Everyone together now: The federal government is gearing up to kill millions of innocent Americans and will target white Christians specifically. There are devious plans in the works for a one-world government that will erase the concept of national sovereignty. Homosexuality and feminism are destroying the fabric of the country. Obama is a Muslim and therefore an illegitimate president (Page says he retired from the military — he claims to have been a Green Beret who did nine combat tours — for this reason).

If you’re yawning by now, I don’t blame you. But the video is a remarkably in-depth look at the psychology of these sorts of conspiracies, as well as the mechanisms that cause them to spread so virulently, and it’s worth watching it to better understand the sorts of thought patterns that are making it harder for the U.S. to function as a country.

There’s an angry, disordered aspect to Page’s speech (his bosses have decided he should undergo a psychological evaluation), and it offers textbook examples of the defining feature of hardcore conspiracy theorists: Once they believe, every new piece of information they come across only further buttresses that belief.

Take, for example, the particularly strange sequence that begins at 17:30. “This is what the world’s gonna start to look like by 2015,” Page says, pointing to a slide that he said was presented by the Secretary of the Army when he (Page) was stationed in Africa. 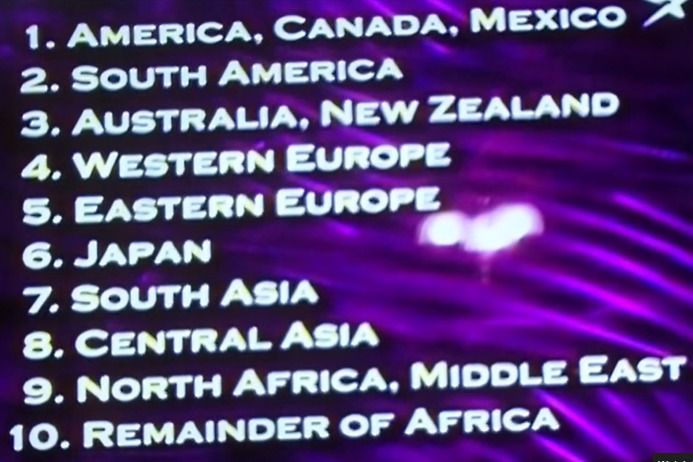 He’s so unclear about the point he’s making that a member of the otherwise rapturous audience eventually asks him to explain exactly what they’re looking at, and he still doesn’t offer anything approaching lucidity. But that’s not the point; everyone already knows one-world government is on the way, so how could this document be anything but proof of that fact? It’s right there! “That’s the only slide in the world like that — you won’t find it nowhere in the world,” Page tells the audience.

Then there’s his interpretation of a USA Today interview with former Supreme Court Justice John Paul Stevens — or “this little homosexual sodomite here,” as Page describes him — which starts at 15:45, in which Page raises the alarm bells over the Constitutional amendments Stevens suggested in his recent book. Page explains that Stevens wants to remove the First Amendment’s protection of religious freedom — an idea that “ought to really get you upset,” he says. Then, he appears to read aloud from the article: “The states must become submissive to the federal government in all aspects.”

He’s wrong on both fronts: Stevens’s First Amendment suggestion involves restrictions on political campaign spending, not anything having to do with religion. And the sentence Page reads appears in neither the USA Today article itself nor in Google’s extensive history of written English (I checked the LexisNexis record of the article, too, and it’s not there either). But everyone knows, of course, that the Obama administration hates religious expression and is trying to exert, via jackbooted thugs, federal authority over states’ rights, so what’s the point of nitpicking over the specifics?

This is a microcosm of what’s going on around the country, and it was well-captured by Kurt Eichenwald in his May cover story in Newsweek, in which he noted several examples of perfectly reasonable projects getting scuppered because of out-of-control conspiracy theories: “In Baldwin County, Alabama,” for example, “an award-winning plan to provide guidance for private-sector developers was spiked—it was, constituents complained, part of a United Nations plot to end property rights, impose communism and force locals onto rail cars heading to secret camps.”

Michael Wood, a researcher at the University of Winchester who studies conspiracy theories, said in an email that part of the reason these sorts of theories are tough to debunk is that “they’ve been around for so long that they’ve integrated themselves into particular strains of religious and political belief.” He traces this particular strain of apocalyptic belief back to the early 1970s, specifically to authors like Hal Lindsey.

“You could more or less do a search-and-replace of the text of this speech and replace Obama with Clinton and 9/11 with Oklahoma City, and it’d look pretty much like a militia speech from the ‘90s, complete with assurances that all of this is unstoppable and is about to go down in the next two years,” said Wood. Those who believe these things receive a lot of support for and reinforcement of their beliefs from their communities. “It’s basically official doctrine in many American churches that there will very soon be a unified world government ruled by the Antichrist, and just about every major world political event fits into a progression toward that goal,” said Wood.

That ties into the broader challenge of debunking conspiracy beliefs. Simply put, psychologists and political scientists haven’t really figured out how to do so consistently and effectively. Attempts to refute Page-esque hysteria tend to lead to a doubling-down on the part of the conspiracy theorists in question. (When a member of the audience asks Page what they can do to get the authorities to help protect them from the coming bloodbath, he tells them they should go to their local police department, but warns them they might not be taken seriously.)

And there’s an urgent need for this debunking. You can’t have serious discussions about the country’s future when, as per a Public Policy Polling poll Eichenwald cites, 28 percent of Americans believe a “secretive power elite with a globalist agenda is conspiring to eventually rule the world through an authoritarian world government, or New World Order.” This is only a part of why so many aspects of American governance are dysfunctional, of course, but it’s an important one. The fact that so many Americans are terrified that their government is gearing up to snuff them out should, well, terrify the rest of us.

You Should Watch That Cop’s Unhinged Speech