Over at the Upshot, Brendan Nyhan, a leading political scientist on the question of how false information spreads, has an interesting post about Emergent.info, a new website that tracks rumors — both true and false — in real time. For each rumor, it provides the number of sources spreading the rumor, debunking it, and keeping an eye on it, and these numbers offer a rather depressing glimpse into the uphill battle faced by would-be debunkers.

Take, for example, a false rumor spreading right now: Tonight, during Monday Night Countdown, ESPN will have a panel on domestic violence consisting entirely of men (Deadspin debunks and explains the origin of this rumor here).

Here’s what Emergent says about that rumor (these numbers are probably slightly outdated by now): 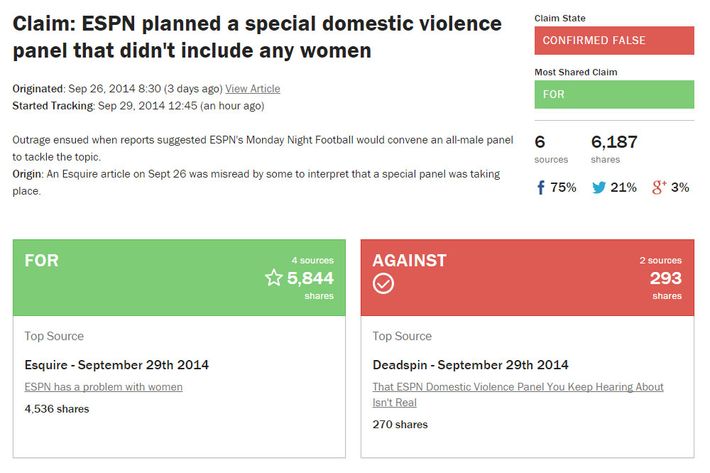 For those keeping track at home, that means about 20 people have shared this false rumor for every person who has shared a debunking of it (that doesn’t count, of course, people who post about the rumor without linking to a specific site).

The problem is that these sorts of rumors just feel so darn good to share online. Look down the list of confirmed false rumors on Emergent — what almost all of them have in common is that they tell their target audience something they already know about the world, something that lights up their senses of self-righteousness and unity. With the ESPN one, for example, the outrage writes itself in light of the Ray Rice and Adrian Peterson scandals: How could they be so tone deaf! Oh, right — football players and their supporters don’t care about domestic-violence victims.

Another false rumor that’s really bubbling right now is that the family of Mariam al-Mansouri, the first female pilot in the United Arab Emirates, “released a statement condemning her and ‘anyone taking part in the brutal international aggression against the brotherly Syrian people’” after she helped bomb ISIS positions. (This one’s not as bad as the ESPN, but there’s still almost a two-to-one share gap in favor of sites spreading it.) If you’re in the Arab world and don’t support the current military action — and this was a rumor that started on Arabic-language websites, Emergent points out — then it tells an irresistible story: “Look at the West holding up this pilot even as her family disowns her for taking part in a brutal act of war! The hypocrisy!”

On paper, it’s been easier than ever to debunk false information — sites like Snopes and, on political rumors, PolitiFact, tend to do a good job. But debunkers face inertia that false-rumor-spreaders don’t: They can’t benefit from the boost of emotion that often helps rumors rocket around the internet. False rumors, writes Nyhan, are “often much more interesting than the truth. The challenge for fact-checkers, it seems, is to make the facts as fun to share as the myths they seek to replace. ”

A Cool Site Tracking False Rumors As They Spread