Dr. Gregory Brown, the brains and heart behind RéVive™, is a noted plastic surgeon from Kentucky. The kind, soft-spoken doctor had little-to-no-interest in the skincare business (that’s the stuff of dermatologists, he figured), but like any conscientious healthcare professional, he did teem with an abundance of scientific curiosity. This would ultimately lead him to such discoveries as Intensité™ Line Erasing Serum.

His interest in skincare initially piqued while working on a study that applied the Nobel Prize-winning research behind Epidermal Growth Factor (or molecules that jump-start cell growth) to treat burn victims. That in turn, inspired him to follow a hunch that this advancement could work on aging skin. He was right.

While conducting clinical studies, his friends and family eagerly volunteered to be guinea pigs (after all, free state-of-the-art beauty products!). They were so blown away by its effectiveness that they pulled every string they had to help him launch what would become RéVive™, his premium skincare line that’s shaking up the business. Recalls Dr. Brown in his light, charming twang, “All of it was serendipitous.”

We chatted with Dr. Brown about how RéVive™, now almost 15 years old, continues to evolve with science, while maintaining its entrepreneurial spirit.

It’s almost counterintuitive that a surgeon would create a skincare line.
Surgery can change the structure of skin but it can’t give skin the dewy glow of youth. For example, if you do a lower eyelid blepharoplasty on somebody, just to take out the puff, you don’t have the best results if the skin is not rejuvenated in some way. The scalpel really can’t do that. Lasers can somewhat, but they’re pretty invasive. That attracted me to skincare.

Your Moisturizing Renewal Cream has had a diehard following for years. But how does something newer, like the  Intensité™ Line Erasing Serum, work in conjunction with it?
You know how an artist will gesso a canvas before they paint on it? It sorta tees it up for the paint. I think that’s the best way to describe what a serum does. It tees up the skin for a cream. The two, together, are synergistic rather than additive. If you’re somebody who has crows feet—and especially women who have what I call “cobweb wrinkles” over their whole face—the line-erasing serum is going to help. The Intensité™ Line Erasing Serum has snail venom that actually relaxes muscle fibers, so you really do get a mechanical effect for the wrinkles themselves. 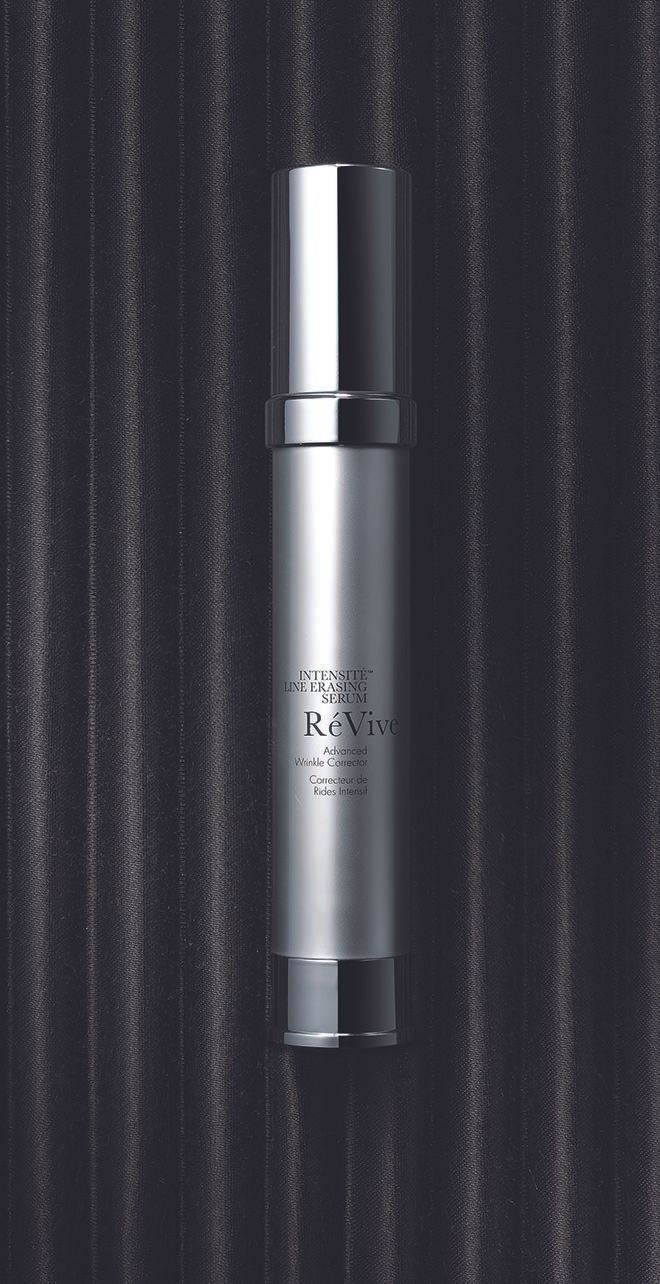 What’s interesting about RéVive™ is that, unlike most skincare lines, it only exists because of scientific discovery.
I never set out to have a skincare business. It was really the science that intrigued me in the beginning. I did research on wound-healing as a resident in 1985 through a million-dollar grant from the Army. Growth factors had just become available, and we were able to show that they made burns heal faster. I always postulated that for skin to look better—to have that dewy glow—cells have to turn over more quickly. That’s why young people look so good! I hoped that adding a growth factor to a cream-based vehicle could also stimulate aging skin. And it did. We’ve come a long way since then: We use fragments of growth factors, which penetrate much better.

You associated youthful skin with dewiness. Are people wrong to be so fixated on wrinkles?
The most obvious sign of great vitality is robust skin. People get caught up in the wrinkles, but if you see someone who has just wonderful dewy, glowing skin—and maybe they do have some wrinkles or whatnot—it still can be very beautiful. It’s the lackluster, tired, sort of dead-looking skin that is something you can’t rejuvenate surgically and that really makes people visibly age.

How did you build this into a business?
I had a friend who was really the person who pushed me hard to do this. She was so crazy about the product and what it had done for her skin. She was a friend of Burt Tansky, who was the head of all the Neiman Marcus stores at the time. He asked if I would make this commercially, so they could put it in the stores. They actually approached me! I made 2,500 jars of what is now our night cream, Moisturizing Renewal Cream. After the second year, I was able to hire one sales person. About nine years ago, I came to a crossroads: I made the decision to stop practicing medicine and work on RéVive™ full time because it had really become a passion of mine. 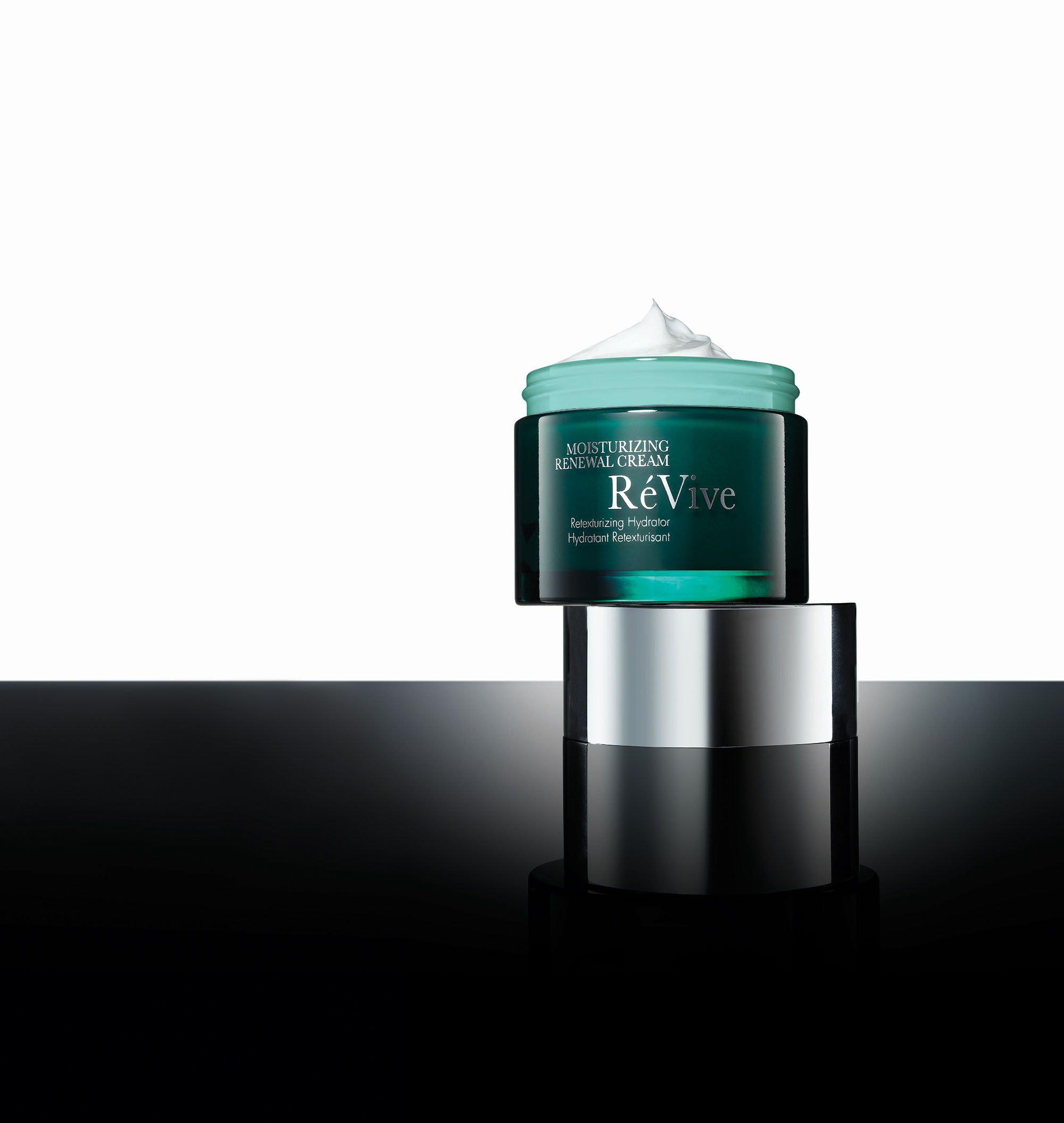 What do you think of the trend of “all-natural” skincare products?
I like to say RéVive™ is the most natural product, even though it’s highly technological. There’s nothing more natural than putting proteins or peptides on your skin that your body recognizes as “self.” All of our bioengineered proteins are formulated to mimic the behavior of healthy, young skin. Botanicals are foreign—that’s not as natural to me as putting on something you already have in your body. Just because somebody puts bamboo drippings in a cream doesn’t mean it’s going to have efficacy other than moisturization, do you know what I mean? A lot of companies have talked about plant growth factors or plant stem cells. That will do nothing. One thing I have learned over the years is that people want to know that there’s integrity in their beauty products. They really want to know the efficacy.

RéVive™ has grown to include so many products. If I’m a newbie, where would you recommend I start?
I tell people if they only buy one product, it should be our original one: our night cream, the Moisturizing Renewal Cream. You’ll see the biggest difference in the quickest amount of time.