“Digital detoxes” have become a thing as of late, and if you’re thinking of taking one, but are not sure what you’d do with your suddenly empty smartphone hand in the meantime, have we got a Kickstarter project for you. Introducing the NoPhone, a rectangular hunk of plastic that evidently weighs and feels much like an iPhone.

If you’re feeling fancy, you can opt for the “selfie upgrade,” which is that same piece of plastic but with a mirror slapped on the back: 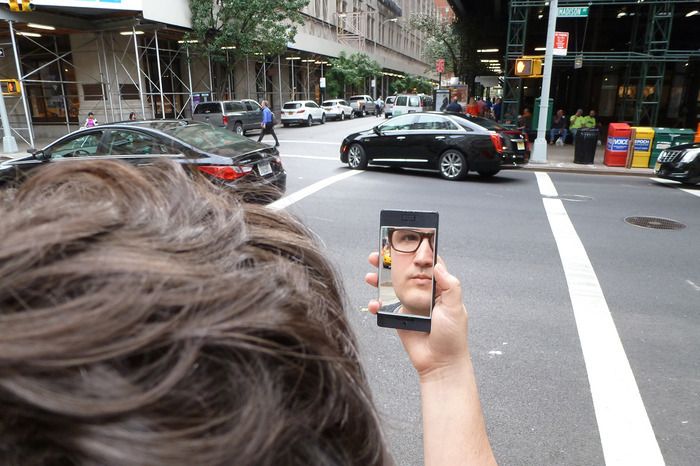 Okay, yes, the NoPhone is a joke. The page is cluttered with things like fake “testimonials,” such as this one, from David H.:

“I used to sleep with my phone in my hand, but my night terrors would cause me to hurl it across the room in an unconscious panic. With the NoPhone, I can still enjoy the comfort of holding a phone in my sleep, without waking up to a shattered screen. Thanks, NoPhone.”

Still, people have already pledged nearly $5,000 to the thing since the Kickstarter page launched about a week ago. Most of these backers are probably people who just want to feel like they’re in on the joke, but the whole concept of the NoPhone neatly taps into fears of how “addicted” we’ve become to our phones. A recent Pew report found that nearly a third of cell-phone owners say their phone is “something they can’t imagine living without,” for example. And some newish research from Baylor University found that college students spend up to ten hours a day messing around on their phones.

Still have questions about the NoPhone? Not to worry. Here are your answers:

Does it have a camera?
No.

Is it Bluetooth compatible?
No.

Does it make calls?
No.

Is it toilet bowl resistant?
Yes.

Here, Hold This Fake Smartphone for a Minute

encounter 8:00 a.m.
The Hostess Who Kept Their Secret Grace Faison — the 97-year-old Brooklyn Heights fixture — opens up about secretly housing women seeking illegal abortions in the late ’60s.
By Eliza Gray
uvalde Yesterday at 9:04 p.m.
What We Know About the Police Response to the Uvalde Shooting Rep. Joaquin Castro has asked the FBI to investigate the police response to the school shooting.
lawsuits Yesterday at 6:30 p.m.
Amber Heard Says Her Defamation Trial Is ‘Humiliating’ and ‘Painful’ On the last day of testimony, Heard again denied claims from Team Depp that she lied and falsified evidence.
what we know Yesterday at 6:30 p.m.
Texas School Shooting Investigation Descends Into a Mess Officials give contradictory statements and parents say they were ignored and arrested trying to save their children.
uvalde Yesterday at 6:27 p.m.
‘As Teachers, We’re Expected to Put Our Lives on the Line’ An educator near Uvalde feels the weight of the Texas school shooting.
in her shoes podcast Yesterday at 6:17 p.m.
The Slippery Slope Ahead As Roe v. Wade Is Challenged  New York’s Rebecca Traister on what’s possible in the fight for abortion rights.
By the Cut
gone sale-ing Yesterday at 6:14 p.m.
Let the Cut Be Your Personal Shopper for Memorial Day Deals We rounded up the best deals from Everlane, Nordstrom, Outdoor Voices, and more.
gun control Yesterday at 5:45 p.m.
The NRA Will Still Hold Its Conference in Texas This Weekend Ironically, attendees will not be allowed to bring guns to the event.
power Yesterday at 5:31 p.m.
Amber Heard Says She Gets ‘Thousands’ of Death Threats a Day “I am harassed, humiliated, threatened every single day, even just walking into this courtroom,” she testified as Heard v. Depp wraps up.
action item Yesterday at 4:45 p.m.
How to Help the Uvalde Community From supporting Robb Elementary School families to pressing for gun-control legislation.
mental health Yesterday at 3:00 p.m.
Get Your Toxic Positivity Out of My Face Increase your tolerance for difficult feelings already.
power Yesterday at 2:44 p.m.
Kevin Spacey Has Been Charged With Sexual Assault in the U.K. The alleged incidents took place between 2005 and 2013.
what we know Yesterday at 1:20 p.m.
These Are the Names of the Uvalde School-Shooting Victims Nineteen kids and two teachers are dead after a gunman opened fire on a Texas elementary school on Tuesday.
uvalde Yesterday at 12:50 p.m.
“It’s One of the Biggest Fears of My Life” After the Uvalde shooting, a Columbine survivor dreads sending her daughter to preschool this fall.
power Yesterday at 11:47 a.m.
States Are Scrambling to Restrict Abortion Access With the Supreme Court expected to rewrite abortion rights, conservative states are advancing increasingly extreme bans.
life after roe Yesterday at 11:12 a.m.
10 Women on Getting an Abortion in the End Days of Roe “It felt like an insult to have to read that my fetus is the size of corn.”
uvalde Yesterday at 10:00 a.m.
‘Who Are the Bad Guys?’ It’s the question my children asked. My answer: the moral cowards who slobber and grovel over money from the gun lobby.
By Kathryn Jezer-Morton
sports! Yesterday at 8:00 a.m.
This Advice from Elite Runners Will Inspire Even Non-Runners Running advice for your entire life.
style Yesterday at 8:00 a.m.
Hey Fashion Friend: I Need Summer Sandals That Won’t Give Me Blisters Hopefully these 18 pairs won’t destroy your feet.
By Emilia Petrarca
books Yesterday at 8:00 a.m.
The Sad Young Literary Man Is Now a Middle-Aged Dad Keith Gessen wrote a memoir about family life. His wife, Emily Gould, is mostly okay with that.
By Elizabeth Weil
More Stories