When I lived in Rome, “taking a coffee” (or, prendere un caffè) gave me heart palpitations. I never mastered the speed, system, or standing-up-ness of their counter culture. I desperately craved a grande skim latté. No — I desperately craved a grande skim latté TO GO, which is absolutely impossible, as anyone who’s ever visited Italy knows. Of course, when I moved back to New York, I missed those stubborn Italian coffee snobs with their rituals and their rules. As a refresher, I sat down with Gherardo Guarducci of Sant Ambroeus for an espresso and a few pointers on the ways and traditions of the Italian café.

Italians and Americans approach coffee so differently …
To an Italian, the coffee culture of standing at “the counter” is as much about coffee as it is about the experience. The counter is maternal, it’s a visceral experience. It’s a combination of somebody preparing something for you, with care, that doesn’t take a long time, and the taste of the espresso in our mouth. In America, it’s a very different, completely unemotional transaction.

What are the rules for “the counter”?
It’s so unconscious to Italians, because it’s part of the fiber of life. To you, it’s rules. To us, it’s like breathing. And the more south you go in Italy, the more you’ll find the need to gather, because the counter, “banco de café,” is literally central to being. The only thing I can compare it to is the culture of the American bar at happy hour, where people want to hang out at the counter of the bar, and form a small relationship with a barman or fellow drinkers. The conversion is still going on, however. New Yorkers want coffee to go. The original founders of Sant Ambroeus in New York would flat-out reject people who asked for coffee to go. They didn’t even know why the reaction was so harsh! I can intellectualize why: The communal feel was so central to how they did life, that the idea of picking it up, and leaving with it, broke all the rules. It destroyed the coffee; it destroyed the sense of community. To them, ordering a coffee to go was both insulting and heartbreaking.

Come on, does taking your coffee “to go” really ruin it?
It’s like the difference between sushi at the counter, and sushi at the table. It’s tremendous. When an espresso goes from the counter to the table, there’s at least 50 percent loss of flavor and temperature. Let alone contact with a paper cup …

But you’ve lightened up about the to-go policy …
In the end, there’s a business concern. I would never say no to someone and alienate them. It’s a poor business practice but it’s also not nice. I hope eventually the customer will catch on, stop in, and have a coffee at the bar and subliminally realize it was an amazing experience. There’s so much subliminal stuff here that’s not at those boutique coffee places. It’s the old European feel — especially on Madison Avenue. The lighting, the sound of the grinder, the conversations in Italian, guys like Lorenzo, who is our most recognizable manager and expert, for all these years. 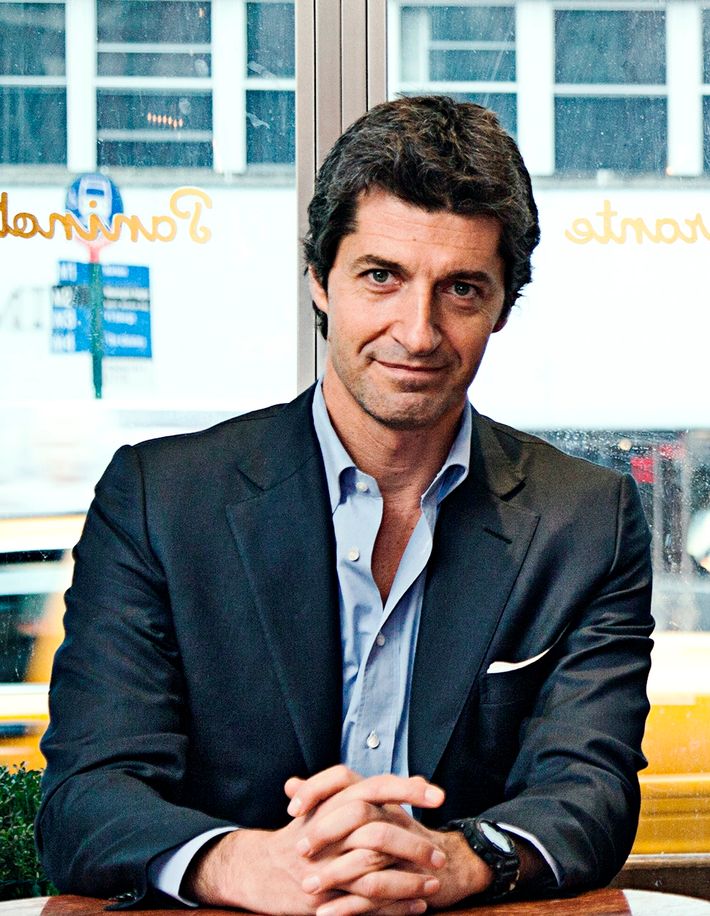 What are the major coffee no-no’s in the eyes of an Italian?
We would never have cappuccino after 11 o’clock in the morning. Hot milk is something we associate with morning, not the rest of the day. The macchiato will get an afternoon nod in Italy once in a while, but that’s it.

Are you rolling your eyes when New Yorkers order skim, or worse, almond milk?
Well, that’s an unintended cappuccino. This was not how things were meant to be. [Lorenzo chimes in: “It doesn’t give you that hug that a real cappuccino can give you. When you get something that is skim or unsweetened, you actually cheat your system. Never cheat the body!”]

Why are we given a small glass of water with espressos in Italy?
They give you water for two reasons: I use it to clear my mouth, because I want to clean out anything that will affect the taste of the coffee bean. Others want the water to clean their mouths after the espresso. But most Italians won’t drink the water after, because they want that taste to linger. In the past, they wanted to save the taste in the mouth to smoke with it.

What about lemon skins with the espresso?
That’s about hygiene. Hot water was not readily available, so they’d squeeze the lemon on the spoon and the cup to kill the germs. It’s like the lemon and lime in South America, a natural disinfectant.

Thoughts on Frappuccinos?
That’s very American. There’s such an addiction to sugar here, much more so than in Italy. Coffee has been turned into an agent to ingest more sugar. A Frappuccino is a meal, or at least the same as a soda or ice cream.

Speaking of meals, explain the typical Italian breakfast, the cornetto, which I find utterly tasteless.
Italian cornetto, which is wrongly called a croissant, is just a perfect combination for coffee. It’s like Tuscan bread — which is very plain, with no salt, because you’re supposed to have it with your sauce. It’s complimentary. The cornetto is similarly complimentary to our coffee. It’s low impact in terms of taste, so it won’t interfere with the espresso. To Americans, if it’s not a muffin, they don’t want it.

With five or six espressos a day, are Italians tweaking out?
Six espressos is barely two cups of coffee.

Do Italians do decaf?
I would much rather take a small sip of regular espresso.