The Adrian Peterson child-abuse scandal is still unfolding — we don’t know what new information is going to come out, or what further disciplinary action the Minnesota Vikings or the National Football League will take (as of now, Peterson is slated to play on Sunday). But it’s still been striking how much less outrage Peterson has generated than Ray Rice.

That could be because there’s no video this time around, or because the Peterson case doesn’t appear to involve a cover-up or shocking league incompetence the way the Rice case does.

Or it could be because for most Americans, the concept of hitting a kid just isn’t that outrageous: 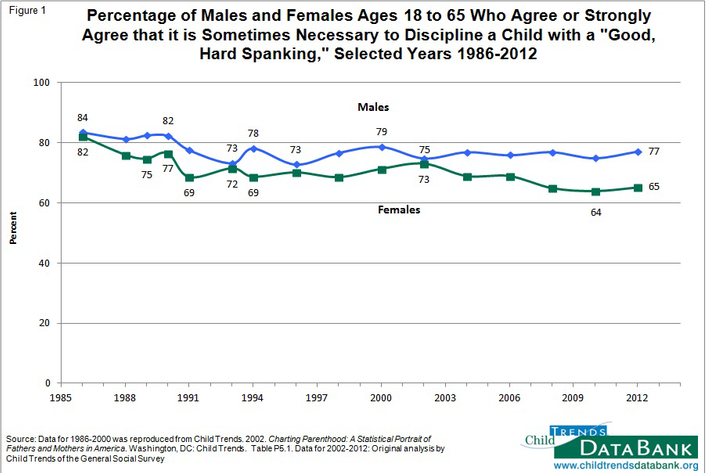 That graph, from the Child Trends Data Bank, shows that a solid majority of Americans approve of not just spanking in some sterile, light-tap-on-the-bottom sense, but a version of it described with the modifiers “good” and “hard.” (Gallup also has some numbers on spanking — scroll to the very bottom here — and they tell a similar story.)

What It’s Like Growing Up With a Depressed Parent
Should We Care How Long Unwed Parents’ ‘Magic Moment’ Is?

Does that mean everyone who approves of spanking also approves of Peterson’s version of corporal punishment, which resulted in “leaving cuts and bruises on his [4-year-old son’s] back, buttocks, legs, hands, and scrotum,” as Margaret Hartmann put it, and, apparently, bruises on the face of another son? Of course not. But it does suggest that there are a lot of people out there who don’t have any inherent problem with hitting a little kid. To them, maybe Peterson went too far or should have used a hand instead of a switch, but the behavior itself is within the bounds of reasonable parenting.

Compare that to what Rice did. Notwithstanding a few weirdly persistent defenders of the disgraced Baltimore Raven, there’s something of a national consensus that domestic violence is unacceptable. There’s no such consensus when it comes to hitting kids.

David Finkelhor, a child-abuse expert at the University of New Hampshire, explained in an email that differences in opinion on hitting children are often defined along geographic, religious, and ethnic lines (the Child Trends Data Bank page has some graphs on this), and that state criminal codes tend to represent America’s overall pro-spanking position. As a result, prosecuting cases like Peterson’s can be tough.

“It seems unlikely to me that a criminal conviction could be obtained in Texas for this and maybe not even in Minnesota, since the jury would almost certainly find that the father did not intend to harm,” said Finkelhor.

As for the effects of corporal punishment, which many parents see as a necessary part of teaching “discipline”? “It has been shown to increase child aggression, and worsen the relationship between parent and child,” said Finkelhor. That’s well in line with the American Psychological Association’s stance — according to a 2012 article, “A growing body of research has shown that spanking and other forms of physical discipline can pose serious risks to children, but many parents aren’t hearing the message.”