Wednesday the FBI released a new report (PDF) on gun violence that sparked headlines like “F.B.I. Confirms a Sharp Rise in Mass Shootings Since 2000” in the New York Times and “These FBI Charts Confirm That Mass Shootings In America Have Risen Sharply Since 2000” in Business Insider. The outlets were referring to this graph from the report: 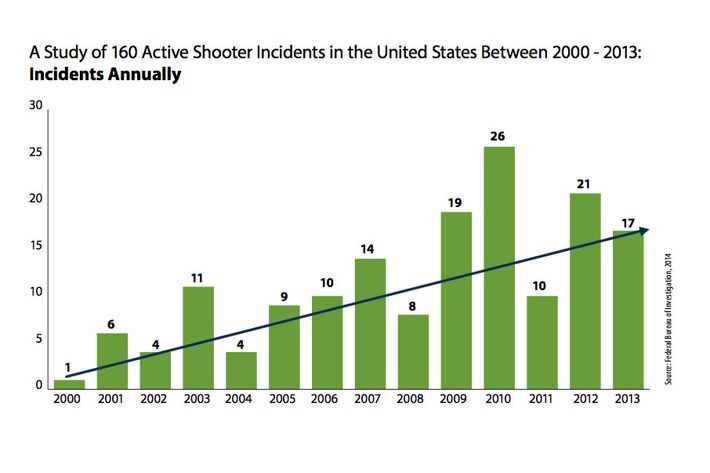 Some of the coverage is conflating two different things: mass shootings and active-shooter incidents. Mass killings or shootings, per the government’s definition, are single incidents in which three or more people are killed. Active-shooter incidents, on the other hand, occur when “an individual actively engage[s] in killing or attempting to kill people in a confined and populated area.” (Researchers tweaked this language a bit for the FBI report so that incidents involving more than one shooter and incidents occurring outside were included, and incidents clearly involving drug or gang violence were excluded.) Unlike mass shootings, they don’t necessarily involve anyone being killed.

So not every active-shooter incident is a mass-killing incident — 40 percent of the incidents the report captured were mass killings. The Times fails to make this distinction. “Mass shootings have risen drastically in the past half-dozen years,” writes Michael S. Schmidt. “There were, on average, 16.4 such shootings a year from 2007 to 2013, compared with an average of 6.4 shootings annually from 2000 to 2006.” This is simply false. The report clearly notes that the 16.4 number refers to active-shooter incidents, not mass killings. For the 2007 to 2013 span, the actual number of mass shootings per year is about six.

Okay: So what does the trend of mass shootings — as opposed to active-shooter incidents — look like? I pulled the numbers from the report’s very depressing Appendix A, which lists the details of each and every active-shooter incident the FBI identified between 2000 and 2013, including the number of people killed (the FBI didn’t count perpetrators as victims when they were killed by police or committed suicide). Here’s what you get when you add up incidents with three or more fatalities (you can look at my quick-and-dirty spreadsheet here):

Yes, there’s an upward trend. But the fact is that these incidents remain exceedingly rare. They are terrible when they occur — and I have to say it felt weird sifting a series of tragedies into one pile that “counts” for a given statistic and one that doesn’t — but there just isn’t a huge statistical difference between two of them occurring in a year and six occurring in a year. (Back in June Science of Us ran a story arguing that there isn’t a long-term increase in mass shootings at all — it still holds up because the researchers whose numbers it was based on, James Alan Fox of Northeastern, used stats that went all the way back to 1976, as well as a slightly different definition of mass shooting.)

Plus, zooming out a little to look at not just this one specific type of murder, but all murders, FBI stats (PDF) paint a different and more encouraging story:

While there’s been a short-term increase in one very specific, narrowly defined kind of violence, the overall homicide rate in the U.S.(the purple line) is on a long-term downward trend that includes the period covered by the FBI report. Mass shootings account for a tiny, tiny percentage of the total murders in the country — in 2012, the worst recent year for mass shootings, just 0.6 percent of total murders, according to the FBI’s 2012 homicide numbers.

Overall, when it comes to violence the country is safer now than it has been in decades. Obviously there’s still much vital work to be done when it comes to gun control, understanding why violent people snap, and so on. But talk of “sharp increases” in terrible, shocking, but extremely rare crimes promotes an alarmist view of the world that doesn’t quite match the facts.

Why You Shouldn’t Fear the Mass-Shooting Rise